The Critical Discourse of the Church – 2 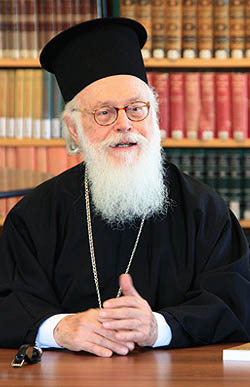 The third point: local Churches have the opportunity to show specific support for each other, in an effort to have a particular voice and impact. For example, by speaking in places where there are representatives of all the Churches in Europe. We’ve already stressed the need for the Churches among the peoples of Northern Europe to speak with understanding and support for the suffering societies in the South. And the reverse is also true. We should be trying to restrain feelings of bitterness and frustration on the part of the economically weaker peoples of the South towards the patronizing behavior of certain economically more robust European states, which like to think of themselves as Christian. Clearly, the examples could be multiplied because of the tensions which exist all over the world between economically strong and weak states. Churches in rich states have no right to remain silent, much less to be fellow-travelers with those patronizing voices which malign nations under stress. We have stated this repeatedly at inter-Christian encounters, because we don’t go there merely as observers, in order to do something which would mean compromising our views. We go precisely in order to participate in a creative discussion and to search for what is just, whatever will help Europe, and the peoples of the world in general, to move forwards to what I’ve called a globalization of mutual support.

But let us turn to our own social environment. Our first duty is serious self-criticism. Unfortunately, the meaning of this crucial word has changed and it’s now generally used to point out the mistakes of others, usually politicians. But apart from the unquestionable responsibilities of the political and economic leadership, we really have to recognize the mistakes which we all made, as citizens, as individuals. It is certainly true that we can’t lump everyone together as having the same responsibilities. Many ordinary people are victims and haven’t benefited from the prosperity which was created with borrowed money. But if we’re brutally honest, most of us can identify personal mistakes and failings. Instances where we didn’t take a stand against the widespread lack of morality in the climate in Greece as a whole, against tax evasion and other aspects of the outrageous misdemeanors that flourish here. If we merely repeat the phrase ‘crisis of values’ there’s a danger what we’ll lose ourselves in vague notions. Again and again the Church has been called upon to name, to emphasize and to point out these enduring values which are universally valid. Justice, in the obvious sense of ‘whatever you wish people to do to you, do to others’ (Matth. 7, 12). Also, truth, the value of moderation in all things, reconciliation, love in all its manifestations and dimensions and the potential to forgive the mistakes of others. But self-criticism isn’t enough; nor can the Church limit itself to scathing observations about culprits. Its prophetic voice should herald an unequivocal call to repentance. I am very well aware that, in these time, that word is often considered obsolete. And yet it still remains relevant, revolutionary, contemporary and modern, as it has done since the time our Lord Jesus Christ highlighted it as the core of His Gospel. ‘Repent’ was the fundamental word; ‘repent’ is the basic verb. Change your mind-set, your behavior, the way you face life: this is the meaning of repentance.