‘Christ stopped at Empoli’ was the name of a classic work of literature. Today, perhaps, He’s stopping in Syria, in Kos, in Lesvos, at the border between Croatia and Hungary. We went to one such stop, Eidomeni, on a Saturday afternoon. For tens of thousands of aching feet, an intermediate staging-post between horror and the unknown. 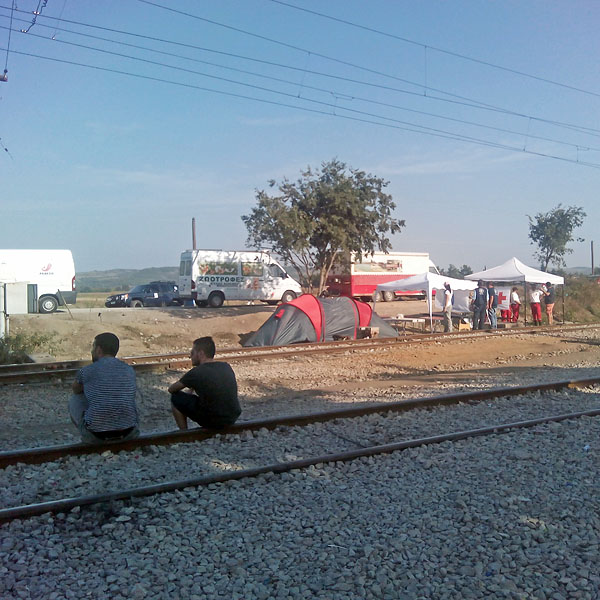 Waiting for the next groups. In the background the tents of the Red Cross and Doctors of the World

A few weeks ago, Dimitris, a former student of mine, phoned me to tell me: ‘On Saturday I’m going up to see what’s going on, to help. I’ve had enough with what I’ve been hearing. Are you coming?’ I was away from Thessaloniki at the time, so I couldn’t go. We talked again a few days later, again on the phone. Dimitris has very little to do with the Church, but his words come from a very long Church tradition. ‘I went and I saw… Lots of people, lots of pain… It’s not like the media says, but still we can’t just stay at home. Since I went I can’t settle down, I just can’t. I’m getting ready for the next time I go to help’.

In the end I managed to go with the Autonomous Intervention group, from Neapolis, in Thessaloniki. We spent the whole week preparing, Saturday morning we did the last shopping and at midday the convoy set out.

It’s only a short distance from Thessaloniki, and in an even shorter time we’d left behind us all the talk of elections and the banalities about whatever important things were happening in Greece. 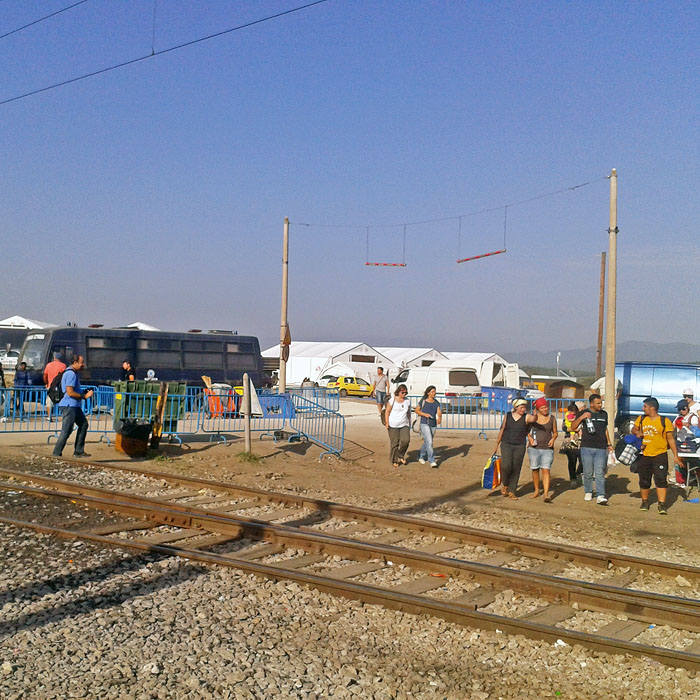 In the background, the camp being prepared next to the railway borders

We arrived and it was a hot day. We were thirsty, but there was no help to be had there. The area at the railway borders was relatively quiet. ‘In previous weeks, when the authorities in Skopje were letting only a few people through, it was chaos here. All the fields you can see were full of refugees. There was a lot of tension. And then, garbage everywhere’, one of the girls on the team explained.

A little further on there were the large tents of the camp. ‘All the facilities aren’t ready yet, but we hope they will be in a few days’, we were told by one of the volunteers working there.

At the reception area there were already some tents. The Red Cross and Doctors of the World were ready to receive any refugees needing first aid. A little further on, in other tents, there were facilities with clothes, water, emergency supplies, some fruit, and children’s games that the refugees passing through could choose from, to make up anything they didn’t have and which they needed to take with them on their long journey, just before they crossed the border. 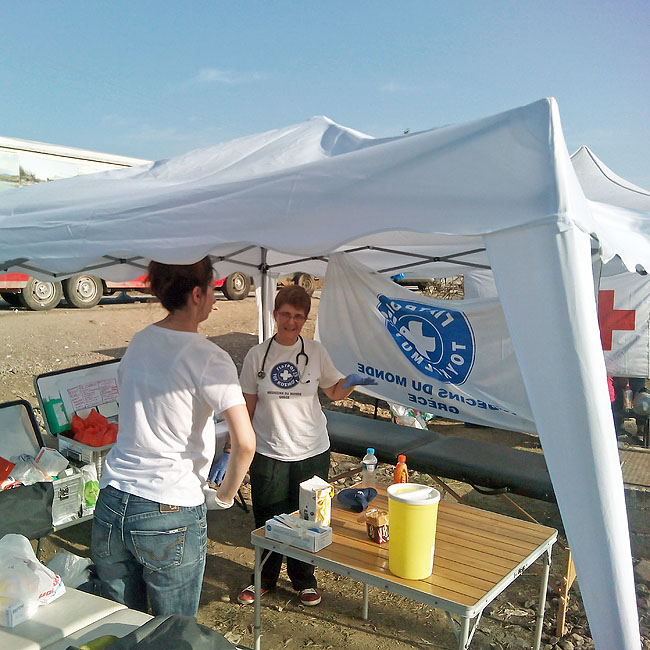 At that time, there weren’t any refugees. Only three Afghanis returned from FYROM, frustrated and bedraggled. They claimed that the police there had confiscated their papers and their money. They rested for a little and set off for Thessaloniki.

This location is occupied only by policemen, the representatives of the UNHCR and the organizations working with them (‘Action’, Metadrasi’) and other volunteer organizations (Médecins sans frontiers, volunteers from the Preservation of Seïh Sou Forest, from the Pentecostal church of Thessaloniki and others), as well as individual volunteers, some of whom are foreigners (from Italy, Germany, the USA and Canada). Most of these groups have translators and every sign is written in both Arabic and English. 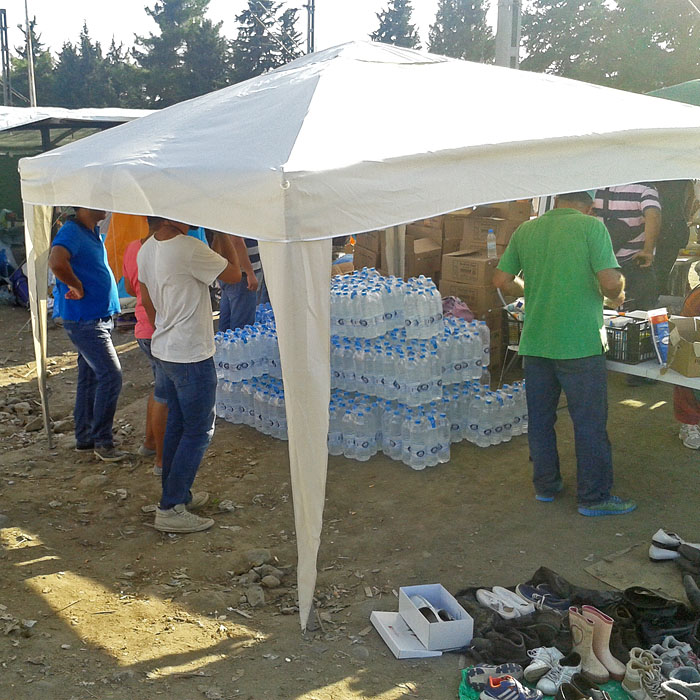 The location is clean. ‘We’ve been trying very hard the last few days’, the volunteers explained. ‘Fortunately we had a lot of people from the PAOK supporters in Panorama. They cleared everything up and then we were able to disinfect’, they added.

Most of the volunteers are young. Men with long hair and ear-rings, women with tattoos- ‘the young people whom they called tramps’, as the poet put it in Axion Esti. The tiredness from the long hours of work was evident on their faces, even though they were determined to fight it. The latest news was that in the next few hours, some 6,000 people would be headed here, by bus from Athens and also, in all probability, by train.

In the meantime, private individuals were arriving by car from all over, bringing supplies. Among them were vehicles from the parish of Neo Mylopotamo, in Yannitsa, headed by the parish priest. A bus and some trucks, large and small, were unloading piles of boxes. Some had been in touch with the coordinators, others not.  Some agreed with them as regards the method of distribution, others didn’t. Squabbles were inevitable and the tiredness from the long hours working at the place contributed to that. ‘Lots of people want to help. They all have their own views, but we have to coordinate. There are days when lots of people come here, but there are hours with huge gaps and we can’t keep up’, according to the volunteers who shoulder the burden of organizing the place and making it work properly. 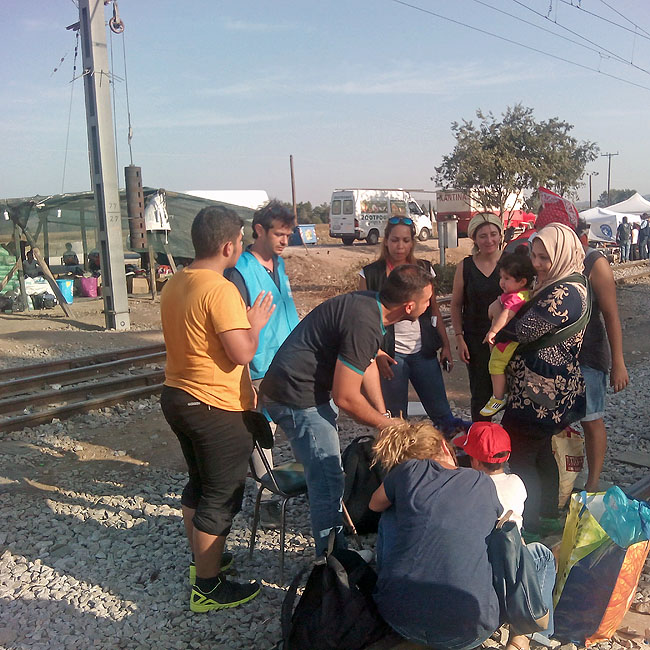 After we’d left, we were told that the local bishop, His Eminence Dimitrios, Metropolitan of Goumenissa, had paid a visit. We heard that he visits the refugee crossing point every evening at about the same time and addresses a few words of support to each group. He welcomes them, bids them Godspeed, and assures them that irrespective of their religion, the Church sees Christ Himself in them. The refugees clap and some mothers take their children to him for a blessing. Of these, some are wearing headscarves and are most likely Muslim. 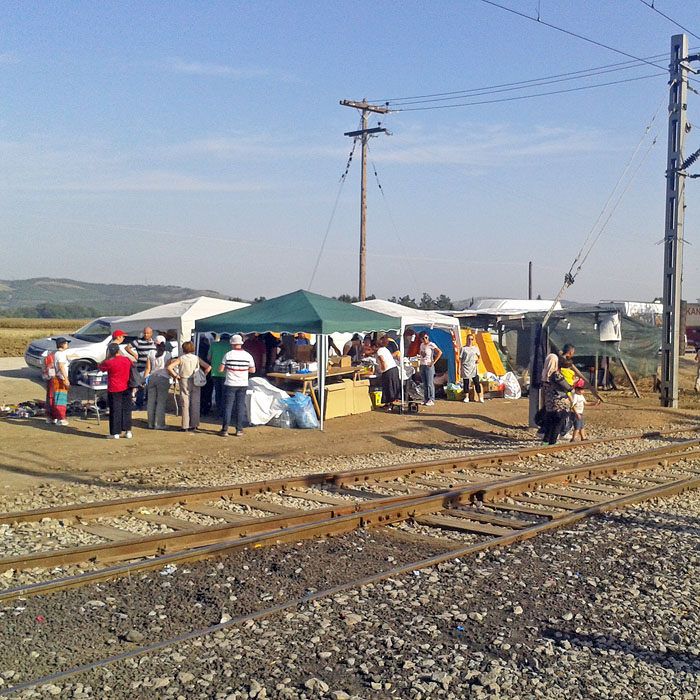 Makeshift volunteer facilities for first aid supplies for the refugees

Looking back, we saw the first convoys. The buses let them off at the village station and they walked about ten minutes to the border. There they’re stopped by the volunteer groups and translators explain that they can get first aid supplies from the village, that there are makeshift surgeries and what, in general terms, they should expect when they cross the border. After walking for a few kilometers, they’ll be in the neighboring country.

More rarely, the groups also included an elderly person. A grandmother with a stick was having difficulties with the track ballast between the rails. Most of them are young men, though quite a number are accompanied by women and children. 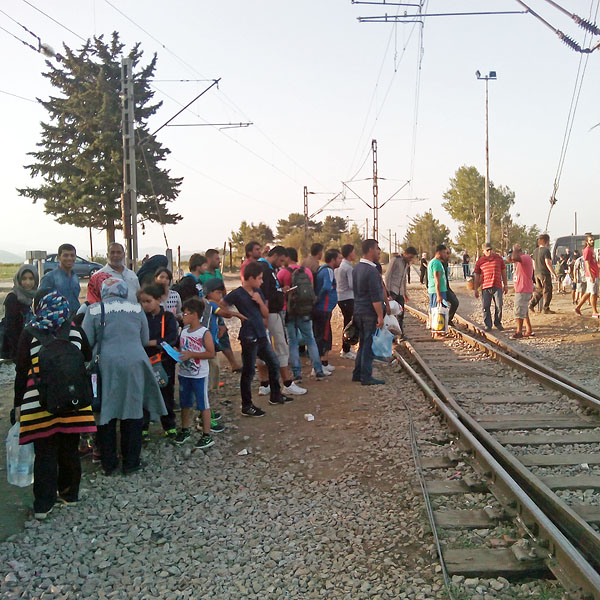 A group is coming. Volunteers hurry to direct them onwards

While most of the aid parcels were handed over to the central distribution center, some were held back to be given out by the hands that brought them to the people who were waiting. Other groups did the same. The people received these bashfully and certainly with dignity. It’s clear that most of them are from an urban environment and behave as such. ‘Thank you, Greece. Thank you friend’, they answered. Soon the bags were emptied. We looked apologetically at those who hadn’t managed to get anything and hastened to assure them that a little bit further on there’d be other things for them. Their politeness was reassuring.

A little child rushed forward to get a drawing pad. Its father intervened and spoke sharply. The child hesitantly took the gift that was being offered, encouraged by a volunteer.

A girl had a bag in front of her with a baby in it. She asked for a bonnet for it and some formula. ‘My own milk’s dried up’, she explained. Everybody rushed about to find her some. ‘How old’s the baby?’, she was asked. ‘Three weeks’. The whole place fell silent.

The next group arrived, with a certain amount of noise. There was a girl of 12-15 with special needs holding on to her mother’s hand and letting out inarticulate cries. Her mother looked straight ahead. Nobody was bothered; each person made their own conjectures as to what the future might bring for mother and daughter. 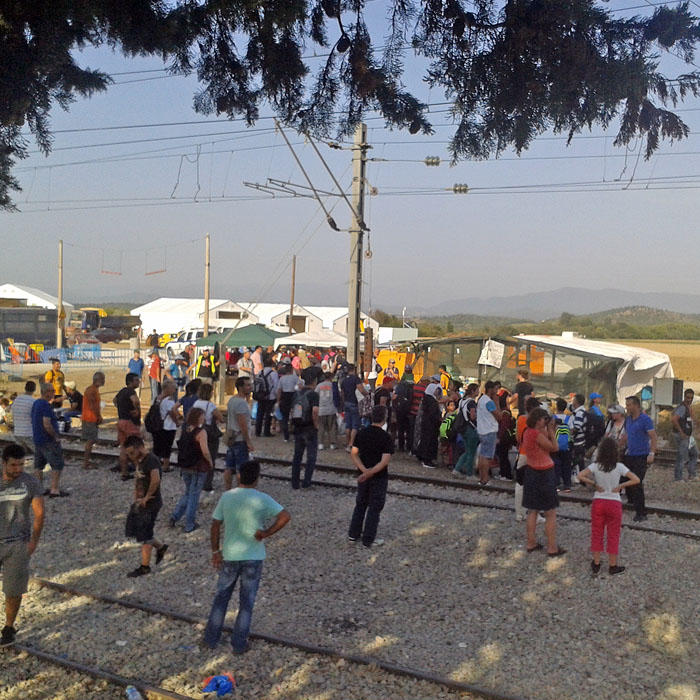 You look at the faces of the people and you recall other voices and images. Their demolished homeland and the demolished views here in Greece: ‘They’re cowards who’ve fled and aren’t fighting the Islamists’; ‘It was their choice to leave, why do you feel sorry for them?’; ‘The Muslims are inundating Greece’; ‘The Islamists are sending agents and fighters among these groups’. You look again and you see Persons. With all their worldly goods in two bags. And children stumbling about. A kid of 5 or 6 nearly jumped out of his skin when a freight train went past and whistled, causing him to shove his hand into that of his mother. Maybe he was credulous or naïve, who knows.

But still, your stomach tightens. It’s been hours since you thought about thirst or anything else. You turn away your gaze, and a young man from one of the group’s catches it. You look at him and don’t believe it: it seems like he’s giving you encouragement. His eyes seem to say: ‘We’re fleeing desolation and are going north for something better… See to it that you, too, manage to get by’. 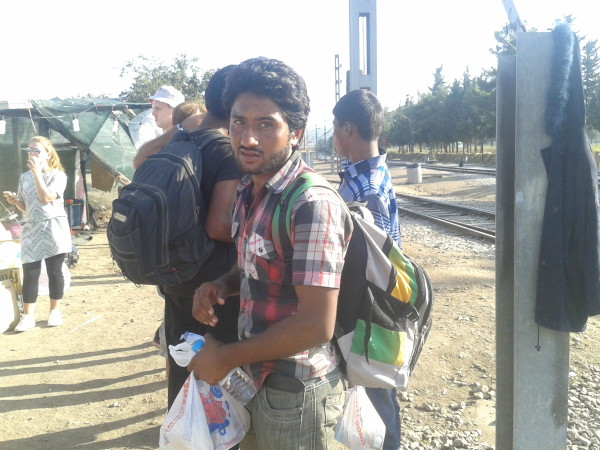 You watch the train leave. Slowly its wheels turn. Round and round they go. Again and again the ranks of these unfortunate people drink the bitter cup of misery, in cycles of pain, loneliness and abandonment. The endless cycles of History.

Most of the refugees are from Syria. There are a few from Iraq and Palestine. A couple take out their mobile phones and get in touch with their families, back home, in Europe or in other groups. They seem to be in a hurry. They already know that the difficulties lie further on, with the closed borders. A volunteer recalls that: ‘Things were bad here as well in the first days. Clean, quiet people came here, the others opened their border like a drip-feed. The people had to wait here 15 to 20 hours, in the heat and the stink. They became angry, what do you expect?’. Nobody wants to think what will happen if there’s a domino effect regarding border closures. What will become of the new waves which will arrive, what will happen in the winter, what will be the fate of those people who are now smiling at you when they get further north. 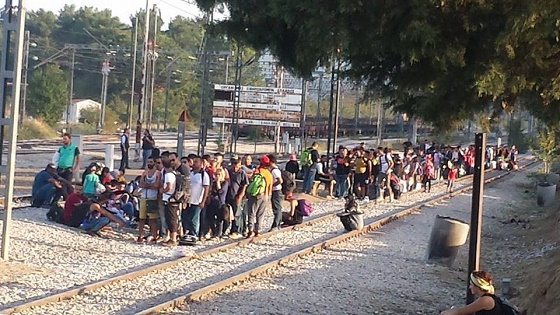 It’s time to leave. You look at the convoys heading north and it brings to mind that film about the Roman Catholic priest who found out about the fate of the Jews in the concentration camps. He saw the indifference of the bureaucracy of his Church towards them, left everything behind and went and was lost (?) with them.

Soon it gets dark, and fewer people seem to be arriving. In the orange light you take a farewell look at the waiting groups. Something within you makes you certain that He is also among them. Among the least.