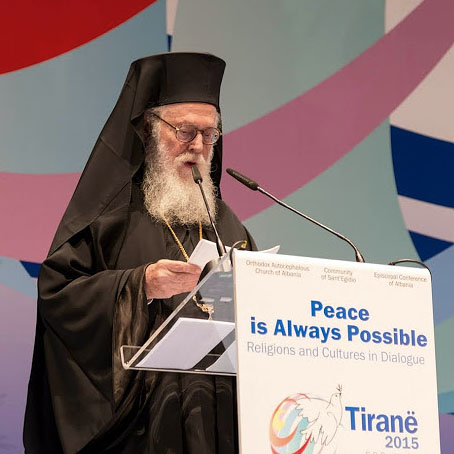 The most tragic violence today is the misuse of the term peace by people who do not really believe in it. Nevertheless, the human longing for a world wide peaceful coexistence remains permanent. Every effort of renewing the interest for peace and the deepening of its meaning is there for a valuable offering in the course of humanity. This Conference, Glory to God, belongs to this category.

It is a particular joy and honour for the Autocephalous Orthodox Church of Albania to be a co-organizer of this International Meeting for Peace, together with the Community of Sant’ Egidio and the Conference of Catholic Bishops of Albania. Before any other comment we would like to express our heartfelt thanks and a warm welcome to all of the distinguished participants who accepted our invitation. May “the peace of God, which passes all understanding” (Phil. 4:7) fill everyone’s life and may it also illuminate our souls during the deliberations of this Conference.

Albania, as is known to most, faced many serious trials during the course of the 20th century, most notably a long-lasting atheistic persecution. Since 1991, however, it has embraced religious freedom and simultaneously fosters peaceful coexistence between religious communities and also those who do not belong to a religious community. The painful memories from the polemical bloodsheds of the previous century, as much from the two world wars and the bloody conflicts at the end of the century in the Western Balkans, contribute to heightening the desire for peace in all its forms.

The title of the topic of our Conference, “Peace is always possible”, seems dynamic and optimistic. The news, however, which is continually transmitted lately by all forms of media, with savage conflicts, which appear in various areas of the planet, comes to cast a shadow with heavy clouds our optimism for the possibility of world peace. Thus adding to the formulation of our topic there is a question mark posed at the end: “Is peace always possible?” Within this uncertain reality, the proceedings of this International Meeting for Peace will certainly result in a hopeful search, offering creative proposals on the critical issue of peace.

As a short introduction I would like to briefly stress five points:
1. For the, at first glance, impossible to become possible, namely the prevalence of world peace, religious communities play a central role. According to the aims that their followers draw from the deposits of their religious convictions they can support or undermine, at a local or global level, peace. A necessary, therefore, prerequisite for peace to become possible is peace between religions.

The issue of peace between religions in dialogue and understanding is, of course, very complex and we are not at vogue for a type of syncretism. The true respect for the religious freedom of every person for his or her human dignity remains the solid foundation for peaceful coexistence. There are important elements and peaceful inspirations in the doctrinal layers of the great religions that must be carefully discovered, utilized and made productive for a worldwide peace. The peaceful voices, which come from the lungs of the global religions, must be intensified and persistently be manifested, by sermons, catechism, lectures and with every form of communication.

All the initiatives for dialogue between religions and cultures will surely help to arrive at this aim. We are grateful to all those struggling for this goal, particularly the Community of Sant’ Egidio for its systematic and inspiring efforts during recent decades.

2. Religious conscience in its various forms has the capability to contribute in various ways to the development of peaceful tendencies and, more generally, the fostering of peace at a local and global level.

In the majority of religious traditions we find: Firstly: a search for inner peace. Secondly: we assert the curbing of aggression. Thirdly: the common characteristic is the pursuit of peaceful relations with the highest Reality, either as impersonal or personal God. Fourthly, principles are established by the religions to facilitate peaceful cohabitation within each particular social unity. And finally, efforts extend towards the maintenance of peace beyond the particular religious community to humanity.

The obligation falls to those of us who believe in God, to investigate and advance an irenic theology and anthropology, drawing from the deep resources of our religion teachings and the best pages of the history of our religious traditions. By emphasizing for each human person to have the duty to oppose violence and working towards reconciliation and lasting peace on earth. The new generation in particular requires a conscious peaceful education that will be nourished and inspired by spiritual religions sources.

3. The search for peace presupposes a constant defence and fixing of justice. Always during the span of the centuries, especially during our age, it emphasises with explosive ways the relationship that peace has with justice. In many religious traditions this bond is encountered. Sincere yearning for peace, at both the local and the global level, means a true desire and struggle for justice. An unjust world cannot be peaceful. Today, peace and justice have also acquired another synonym: development. And all of us can and must contribute to the development of the poorest areas. Poverty remains the worst type of violence. When people, near or far from us, are deprived of the basic needs for their survival, it is not strange that they turn to other directions and adopt other extreme religious beliefs in order to achieve a just society and to discover a meaning of life and death.

More specifically, relative to the problem of terrorism, which has dominated recently, we assume that the western societies, which have economical, scientific and military power, ought to proceed to a creative self-critique. They should see their responsibility more clearly and their debt to the new global dimensions. Peace and safety, for which we are all talking about, will be ensured with the care for social justice and the development of poorer societies of the planet. It would be tragic, spiritually and politically, because of indifference or arrogance, to let a new, multiform proletariat develop which would violently revolt by abuse of the spiritual atomic energy of a certain religious tradition.

4. Something that is often ignored, while it constitutes the nucleus of peace, is that religious conscience is compelled to stress that peace begins from within, in the depth of the human existence. It is related with humility, forgiveness, freedom of hatred, of bitterness and of jealousy. It flourishes in constant communion with God of peace. Particularly the Christian meaning of inner peace is deeper and broader than the apathy of the Stoics. It is not restricted to impassivity for what happens around us. Keeping our inner peace, we shall be able to live with others, “if possible, so far as it depends upon us, live peacefully with all” (Rom. 12:18).

5. At final analysis, the opposite of peace is not war but egocentrism: individual, collective, ethnic, racial. This mobilizes the various forms of violence, which kill peace through various forms. This is the inspirer and supplier of the large and smaller conflicts; this is what bombards them with continual hate.

The antidote to egoism does not consist of general ethical advices and encouragements. Nor do lawful expressions or mechanisms of suppression. But the strengthening of love. One multi-dimensional love, real, unselfish, which isn’t limited by borders, prejudices and every kind of distinction. The enormous possibility and contribution of a healthy religious conscience is located here. This, even in conditions of long-lasting conflicts, guarantees the power of forgiveness and reconciliation. The power of love finally prevails, the love for power – which destroys peace.

Every one of us, according to our religious inheritance, is guided to the fight for peace. And from this personal faith we find inspiration and power. Especially for those who follow monotheistic religions, the certainty that peace is the gift of God dominates. And that human being is called to take it on and to contribute in its enforcement, with respect to every human person, regardless of political, religious or other convictions.

I hope that, through the presentations, the discussions and the general deliberation of our International Meeting for Peace, we will find invaluable material for a fuller in-depth analysis to the critical topic of peace, of the requirements and of the possibilities for its achievement; even inspiration so that we can continue with even greater enthusiasm to be pieceworkers. With the certainty that “blessed are the peacemakers, for they will be called the sons of God” (Mt. 5:9).

The struggle for peace, deep within us, in the environment, in our community, across the universe, is our primary duty. And in the 21st century it must become our main concern, in the certainty that God is peace. God is always with the peacemakers, inspiring and supporting them in their efforts and struggles.