The Pectoral Ornament of Saint Makarios of Corinth

The only work of the early post-Byzantine centuries to have been located in the sacristy of the Monastery of Vatopaidi is a small pectoral reliquary (enkolpion) of the early 16th century, representative of a little-know period of transition in the silversmith’s art. 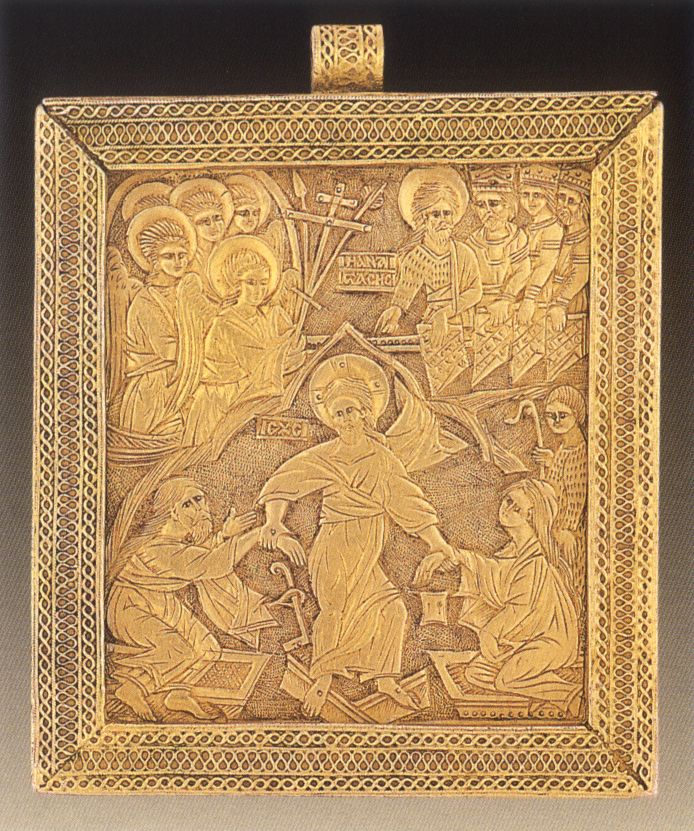 The sides of the enkolpion have the following inscription in niello: “OF MAKARIOS M[ET]TROPOLITAN OF CORINTH HYPERTIMOS AND EXARCH OF ALL THE PELOPONNESE AND LOCUM TENENS OF NICAEA”.

Makarios, who became Metropolitan of Corinth in 1507, was translated to the see of Thessaloniki in 1517, and died at Vatopaidi in 1546 as the monk Mikhail.

The shape of the pectoral, the style and the techniques employed are still directly dependent upon the works of the Late Byzantine period. Almost square, with a sliding front, it is reminiscent of Byzantine reliquaries with a sliding cover. The frame and the suspension ring are of fine smooth wire, which forms a braid pattern on the back, and loops between chains on the front. The geometrical frame can be linked with, on the one hand, Russian works of the 15th century, and, on the other, with the frame of carved wooden crosses of the 16th and 17th centuries, and perhaps should be seen as a survival of a feature of post-Byzantine metalwork.

On the back of the enkolpion, Jesus is shown enthroned, His feet resting on wheels, and flanked by the Blessed Virgin and St John. The inscription reads: “THE COMPANY OF THE ANGELS THE COMPANY OF ALL SAINTS”, but this is a summary presentation of All Saints which, taken from the scene of the Second Coming, in fact depicts the Deisis with choirs of angels, righteous men, and saints. 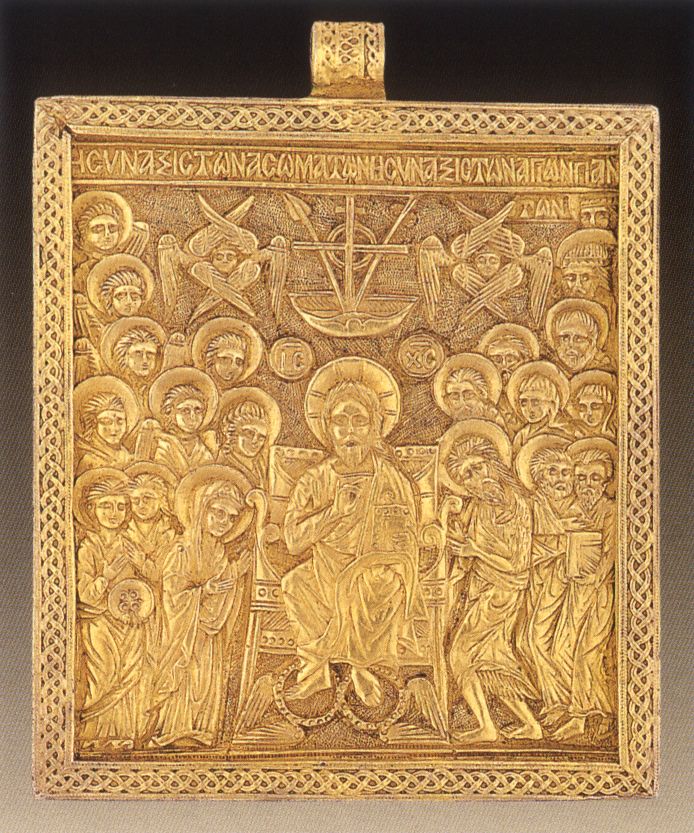 On the front we have a composite depiction of the Resurrection in two bands in an iconographic type which is difficult to fit on to a small surface and is more appropriate to monumental painting. The Descent into Hell is divided from the sphere of the heavens by an arch, above which on the left is a choir of angels, with St John the Baptist and the prophet-kings on the right, a scene which normally ought to be in the lower band. The choir of angels, the first of whom holds the cross of Golgotha and the symbols of the Passion – the lance and the reed – usually occupies all of the zone of the heavens and is associated with the eschatological interpretation of the Resurrection as the harbinger of the coming judgment.

In monuments of the Palaeologue period this composite iconography seems to have been favoured by donors and prelates well-educated in philosophy and theology. This is the case here too: Metropolitan Makarios was a bibliophile of a kind rare for his times. It is significant that his life is known to us chiefly from the notes on the manuscripts which he collected and left to the Monastery, together with his episcopal en­kolpion.