The icon of Our Lady Vematarissa from Vatopaidi Monastery

The ‘palladium’ of the Monastery of Vatopaidi is the famous icon of Our Lady Vematarissa or Ktitorissa, which was saved from the Saracen raid by being kept for 70 years in the well below the sanctuary with a candle burning in front of it. 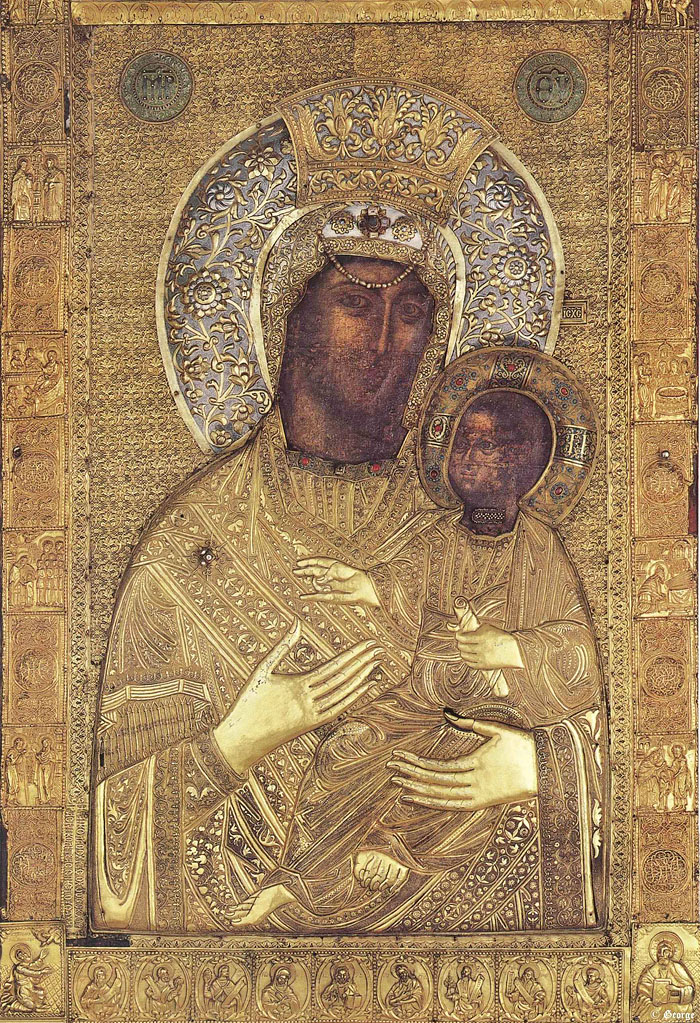 The icon of Our Lady Vematarissa

The revetment of the icon consists of parts from different periods and in various styles which cover the icon, leaving visible the faces of the Blessed Virgin and of Christ. The Byzantine plaquettes of the frame are well known. The oldest post-Byzantine intervention is the nimbus of the Blessed Virgin, which dates from the second half of the 16th century. Gilt stems with lotus palmettes and multi-petalled flowers spiral and intertwine on a silver ring-punched background in the typical style of Ottoman decorative art which we encounter in church and other silver from the European provinces of the Ottoman Empire, such as in the liturgical hot-water jug from Meleniko.

The next intervention, chronologically, on the revetment of the Vematarissa dates from 1690 and, according to the inscription on the frame of the background, is the work of the goldsmith Nikolaos “FROM THE REGION OF NIK­O­L­ITZA”. Nikolitza is one of the Vlach-speaking villages of Epirus in the Grammos Mountains region, which after 1770 shared the same fate as nearby Moschopolis and was gradually deserted under the pressure of Turco-Albanian pillaging raids. Most of the inhabitants took refuge in Kru­s­­ovo, where they continued to practise gold­smith­ing. The specialisation of agricultural moun­­­tain villages of, chiefly, mainland Greece in an area of art such as painting, architecture or wood­carving is a phenomenon which, particularly in the case of the 18th century, has been linked with a decline in artistic standards and more simple, popular art forms. The revetment of the Vematarissa does not belong to this category and raises the problem of the apprenticeship of the craftsman, whose standards are high and who seems to have been in contact with the trends of his age.

The ground of the icon’s revetment is covered with dense decoration, dominated by a repeat pattern of medallions, and the first impression given is that the craftsman wished to remain faithful to the layout of the Byzantine plaquettes, which were decorated with circularly winding scrolls. The result, however, is in the nature of an arabesque in which two levels interlace on equal terms: a grid rhomboid with lotus palmettes on the vertical axis and a row of circles with half-palmettes of the Ottoman type at the horizontal junctions. In spite of this, the arabesque is inflexible and severe, characteristic features of this late period.

Also severely and skilfully shaped is the part of the revetment which covers the garment and the maphorion* of the Blessed Virgin. Starting out from the linear folds, a number of bands are aligned with varied decoration. Indicative of the style of the late 17th century are the scroll-bearing flowers with a cross-hatched centre. Apparently of the same period are those parts of the revetment with enamel on them. The medallions containing the abbreviations MΗΘΗΡ ΘΕΟY (“Mother of God”) and the neckband of the Theo­tokos are decorated with filigree enamel in green and blue shades. The nimbus of the Infant Jesus is treated differently and has sections with blue champlevé enamel and the calligraphic inscription O ΩΝ (“He that is”), from which flowering foliage springs, as in the printed initials in the books of the period. The other parts of the nimbus have on a ring-punched background filigree stems with jewelled rosettes and blue enamel petals, similar to those which adorn the Blessed Virgin’s neckband. A later intervention, of the second half of the 18th century, is the head-covering of the Theotokos with acanthus foliage and and strap-like stems, a feature derived from European decorative art. Finally, the frame of the two short sides and the crown of the Virgin are additions of the mid 19th century, made in Jassy (Romania) at the expense of the Archimandrite Dionysios, to whom the Vatopaidi sacristy owes many of its later works.