The attribution of items of silverware to local workshops is fraught with difficulty where there are no documented inscriptions, and was until recently based exclusively on tradition, normally handed down by local historiography. Frequently, the very few objects which could have been furnished as proof were not up to expectations or of recent manufacture. An additional difficulty, particularly in the case of the 16th and 17th centuries is the unity of the decorative style which stems from the dissemination of the art of the capital. The sacristy of Vatopaidi Monastery provides us with exceptionally important material for the verification of the tradition.

Even before 1813, when they signed the written charter of their Commune, the goldsmiths of Meleniko had formed a guild, but their tradition and the works which can in a direct or indirect way be attributed to them or associated with the place are a good deal older. Worth mentioning is a fine 16th-century jug with Ottoman decoration which was the property of the Metropolitical See of Meleniko. The best known of these works are in the Vatopaidi sacristy: three oraria (deacon’s stoles), of 1632/33, 1730, and one unsigned, two holy water crosses, of 1733 and 1750, and, according to the surviving inscription, the oldest casket for the Holy Girdle, dating from 1636. In the ledger with the vessels of the Monastery handed over to the Sacristan in 1748 mention is also made of “a melenikiot crown for sale with pieces of gold and pearls”. There was an important metochi of Vatopaidi at Meleniko, which explains the close connections with the Monastery, which are evident down to the early 19th century, when the Christians of the region of Meleniko financed the wall-painting of the narthex of the Chapel of St Nicholas.

The orarion is an ecclesiastical vestment, mainly a work of gold-embroidery, and its decoration, as here, with silver-gilt plaquettes sewn on to red velvet is exceptionally rare. However, it demonstrates with clarity the close dependence of gold-embroidery on goldsmithing, since the material and the techniques of precious metals served as models for embroiderers. The orarion of 1632/33 is adorned on the yoke with a large diaphanous stone, very probably rock crystal, in a mounting in the shape of a serrated leaf, and is decorated at intervals with medallions containing six-winged seraphim and plaquettes with angel-deacons holding an orarion in the fingers of the left hand. 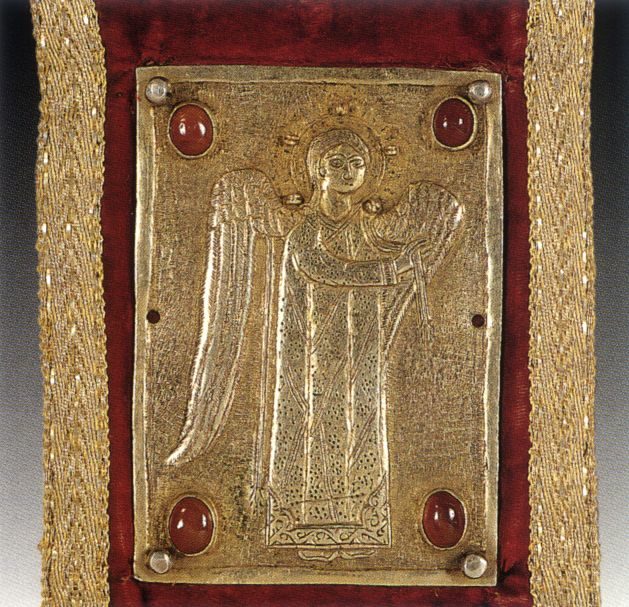 The opening words of the Sanctus “Holy, Holy, Holy” in well-designed jewelled letters are secured along the two sides of the velvet band. The inscription tells us that the orarion was made at the expense of the priest-monk Romanos; the fact that he was from Galatista in the Mantemochoria is known to us from the contribution which he made to the rebuilding of a now ruined part of the Monastery.

From the early 18th century, the multi-coloured jewelled appearance of precious jewellery yielded to the introduction of the technique of filigree. The inscriptions on the filigree buckle read: “SUPPLICATION OF THE SERVANT OF THE LORD KOMNEN[I] DAUGHTER OF THE LATE LAMENTED THOMAS BOURNAZIS FROM MEL[E]NIKO” and “KONSTANTIOS PRIEST-MONK SON OF ANTONIOS 1725 FROM MEL[E]NIKO”. The spiralling twisted wire forms a ground of rosettes which is adorned with silver nail heads and gilt granules; on this, instead of jewelled features, rest hemispherical filigree rosettes. A similar buckle is stamped with the tug˘ra of Mahmud I (1730-1754), while others are in the sacristies of churches and in museums of Greece.