The sketes, which are reminiscent of the ancient lavras, are not single building complexes, but consist of cells or “huts” scattered around a central church called the kyriakon. In the sketes the monks live an idiorrhythmic life under the supervision of a prior whom they elect. The oldest organised skete is that of St. Anne, which was already in existence in the 16th century and belongs to the Great Lavra. By the beginning of the 15th century the same monastery also owned a group of cells that formed a sort of embryo skete in the area of Kerasia. The skete of Kafsokalyvia, which also belongs to Lavra, seems to have been established at the end of the 17th century. The remaining sketes that survive to this day, Saint Demetrios of Vatopaedi, Prophet Elias of Pantokratoros, New Skete and Saint Demetrios Lakkos of Saint Paul, Prodromou of Iviron, Saint Panteleimon of Koutloumousiou and Evangelismos of Xenophontos, were all established in the 18th century.

The only cenobitic sketes, Saint Andrew of Vatopaedi, inhabited by Russian monks until the present century, and Prodromou of Lavra with its Rumanian monks, appeared after the middle of the 19th century.

Cells are a simpler form of monastic life. They are small, compact complexes of buildings, which since 1661 have been subject to a monastery, and which are occupied by an “elder” and his spiritual followers. In not a few cases the cells are a continuation of or have been built on the ruins of ancient cells, often keeping their old Byzantine names. 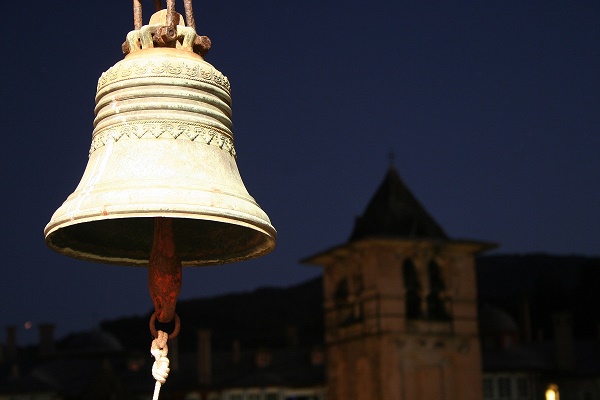 The population of Mount Athos during the Byzantine period is not known. In the 11th century seven hundred monks are recorded as living in the Great Lavra alone. The population of the Mountain would certainly not have remained steady, as from the 10th to the 15th centuries new monasteries were founded and smaller establishments disappeared or merged with larger ones. Occasional general crises and problems arising in individual monasteries must have led to fluctuations in the total population.

For the Turkish period we have more information. Travellers from the late 15th century onwards, Ottoman tax rolls and, from 1764, censuses of the monks help us to gain a clearer picture of at least the order of magnitude of the Athonite population. The figures vary widely: tax rolls of 1525/1530 mention 1440 persons, while Orthodox travellers and monks of the 16th century speak of 2246 to 2860 souls. The 1764 census records 2908 monks, and that of 1808, 2390. In general one could say that, with the exception of the time of the Greek Revolution when the number of monks fell sharply, and the turn of the century when Athos was systematically swamped by thousands of Slav monks, the population of Mount Athos did not exceed three thousand souls.

Despite five hundred years of financial hardship and historical misfortunes, Mount Athos developed into the most important spiritual centre of the Eastern Orthodox Church.

The tradition that created the hesychast movement in the 14th century, with its many scholar monks living and writing on Athos, was not completely lost. The first signs of a renaissance were already apparent by the first half of the 16th century. The libraries were enriched with large numbers of manuscripts copied in the scriptoria that existed in nearly all the monasteries. Research has so far found very few of these (e.g. in the monasteries of Iviron, Koutloumousiou, Dionysiou, Philotheou and Xeropotamou), but all the evidence suggests that the scriptoria were in constant use until the 17th century, when printed books replaced manuscripts.