Cooperation with the Ottoman authorities was essential to preserve the autonomy of the Athonite community and the landed property of the monasteries.

In comparison with their treatment of the conquered Christian peoples, the sultans dealt favourably with Mount Athos in the beginning. The community’s autonomy was respected, and taxes on monastic property in the peninsula itself were light. A lump-sum tax was levied on Mount Athos as a whole, the monastic authorities being left to decide how the burden was to be shared. The monks’ attempt to get the same treatment for their properties outside Mount Athos was only partly successful.

Although direct taxes were not, except for a few periods, particularly onerous, extraordinary taxes and duties and above all the arbitrary behaviour of the tax collectors placed an intolerable burden on the monasteries. The monastic archives are full of firmans, or edicts, issued at the behest of the monasteries, that show both the extent of the problem and the sultans’ attempts to deal with it. 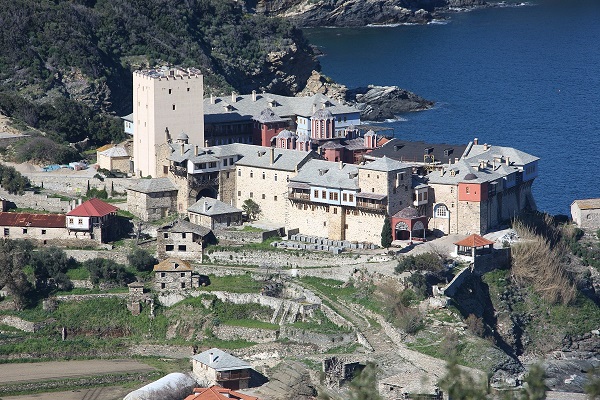 The large and wealthy dependencies the monasteries possessed, mainly in central and eastern Macedonia (Halkidiki, round Thessaloniki and near the River Strymon) and also on the islands of the north Aegean, did not remain unscathed. Many monasteries declined and their income dried up as their lands were partly or wholly confiscated and given to Ottoman feudal lords or huge areas of fertile land were incorporated into the sultan’s estates. A heavy blow fell in 1568/1569, when the Sultan Selim II confiscated all the monasteries’ property as an extraordinary administrative measure and obliged the monks to buy it back. This repurchase cost Mount Athos fourteen thousand gold florins.

To these institutional and arbitrary actions of the Ottoman authorities were added other misfortunes. Natural disasters in the shape of fires and earthquakes, piracy, brigandage and military operations frequently nullified attempts to restore the monasteries, forcing the latter into heavy debt with all its consequences.

During the first centuries of Ottoman rule nearly all the Athonite monasteries were reduced to trying to survive financially while maintaining and exploiting such property as they had managed to keep.

The production of the Athos peninsula itself provided a basic living, since the tax on this was offset against the poll tax. Vegetable gardens and vineyards, logging, olives and fruit gathering were main products and activities that made survival possible.

This production, however, was not enough to meet all the monasteries’ needs. The bulk of their income during this period came from: a) the systematic exploitation of the dependencies, which gradually recovered and grew through donations and purchases, and provided a steady income; b) the dependencies along the Danube, which especially in the 17th century were dedicated to Athos in large numbers by the Orthodox rulers of Moldavia and Wallachia; c) large grants of money not only from the above princes and their nobles but also from the Russian Tsars and generous Greek senior clergy and gentry. These donations played a vital role in maintaining and extending the monastery’s building complexes and adorning them with works of art; d) money collections in the Greek East and farther afield among the Slavs and in Europe.

As long as the Ottomans did not interfere in the internal affairs of the Mountain, the central administration continued as it had in Byzantine times, for about a further century and a half. The protos retained his administrative, executive, juridical and spiritual powers, but the institution’s old prestige was gone. The annual imperial grant had been stopped and the Protaton found it hard to make ends meet. Its lands on the peninsula gradually passed into the hands of the monasteries, as did the cells under its jurisdiction. The juridical function was encroached upon by the Ottoman cadis, or judges, to whom the monasteries appealed when a decision by the Protaton went against them. The institution of the protos went into decline at the end of the 16th century, with the last holder of the office being mentioned in 1593.