The establishment of the ecumenical character of Athonite monasticism

The Typikon of Tsimiskis was supplemented and modified by the Typikon of 1045, which was issued during the reign of Constantine Monomachos to deal with new developments. A third, almost completely new Typikon was issued in 1406, during the later Byzantine period. This was mostly concerned with the internal administration of the monasteries and the relations between monks and their leaders, and was issued by the Emperor Manuel VIII Paleologos.

The founding of Lavra and Saint Athanasius’s multifarious activities gave the impetus for the establishment of other cenobitic monasteries by famous men who were directly or indirectly associated with the saint. In 979/80 the Iberian (Georgian) nobles John Tornikos and his son Euthymios, armed with imperial privileges and grants, built the Monastery of Iviron. Shortly afterwards three wealthy nobles from Adrianople, Athanasius, Nicholas and Antony, founded the Monastery of Vatopaedi. 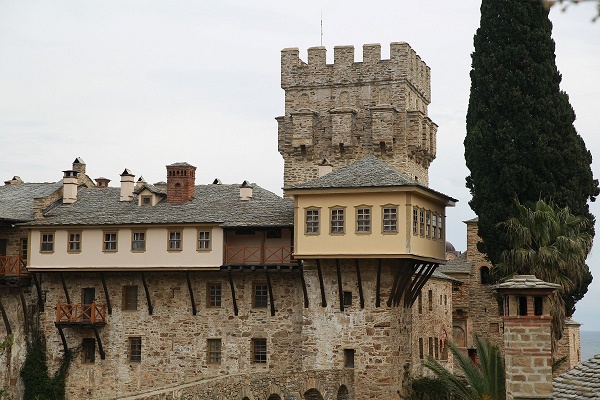 By the end of the 12th century the pan-Orthodox and ecumenical character of Athonite monasticism was well established. Before 1142 a monastery for Russian monks had been founded, in 1198 the Serbian monk-king Symeon Nemamja and his son Saint Sabbas were granted the ruined monastery of Chelandari, and later Zographou became the centre of Bulgarian monasticism on Athos.

With few exceptions, the imperial policy towards Mount Athos was extremely favourable throughout the Byzantine period. Nearly all of the monasteries at one time or another were named “imperial monasteries”, that is imperial institutions protected from interference by civil and church authorities. Privileges, tax exemptions and grants by both emperors and nobles gave them wealth that allowed them to carry out their spiritual work.

The historical course of the Athonite monasteries shared the fate of the Byzantine empire only up to a point. When the empire went into decline, the monasteries continued to flourish. The 14th century in particular was a time of renaissance. Hesychasm, or quietism, a spiritual movement that arose and developed on Athos, renewed the ascetic ideal and made the Holy Mountain a spiritual beacon for the Slav peoples of the Balkans and Russia.

Monasteries continued to be founded or restored on Athos despite the political and economic waning of the Paleologue empire, and the civil wars and disturbances that rent the Balkans. In the centre of the peninsula, near Karyes, Vlach rulers rebuilt the Monastery of Koutloumousiou, and on the coast two nobles, Alexios the Stratopedarch and John Primikerios founded the Monastery of Pantokratoros. On the west coast the Serb despot John Ugljesa was chiefly responsible for building the Monastery of Simonos Petra, and Saint Dionysios of Trebizond raised the Monastery of Dionysiou, with generous assistance from Alexios III Komninos, Emperor of Trebizond. To the south the Monastery of Saint Paul, after lying in ruins for centuries, was rebuilt by two Serb monks of noble lineage, Gerasimos Radonja and Antony Pagasi. Lastly, the Monastery of Gregoriou was built, probably at the beginning of the 15th century.

In 1423 Mount Athos was incorporated into Ottoman territory. The end of the Byzantine, Christian empire and the new state of affairs inevitably changed the political orientation of the Athonite monks and created painful financial problems, and gradually altered the fundamental institutions of Mount Athos. Nevertheless these changes were very slow, and the adaptation to the new political, social and economic conditions did not affect the spiritual principles of the monastic life.