Intellectual activity on Mt Athos at past times

As was the case with all the monastic libraries in the East, those on Mount Athos may well have been infrequently used, but they can certainly not be written off as storehouses for relics. Contrary to popular opinion, the Athonite libraries were the source of the books of many clerical and lay scholars during the centuries of Turkish occupation.

Many scholars, mostly monks and clergy, worked and wrote in a monastery at some crucial time in their lives. A typical case is that of the famous scholar and enlightener of the Russians Maximos the Greek, who at the beginning of the 16th century, after his return from the West, chose the Monastery of Vatopaedi as a retreat. Shortly afterwards the monk Pachomios Rousanos left his mark on the library of Iviron.

Other learned monks owe their fame as writers to their intellectual activity on Athos. The earlier Dionysios of Iviron, his namesake Dionysios the rhetorian of Studium, Agapios Landos, writer of popular improving literature, and the prolific monk of Xeropotamou Kessarios Dapontes are typical examples of this class of scholar. 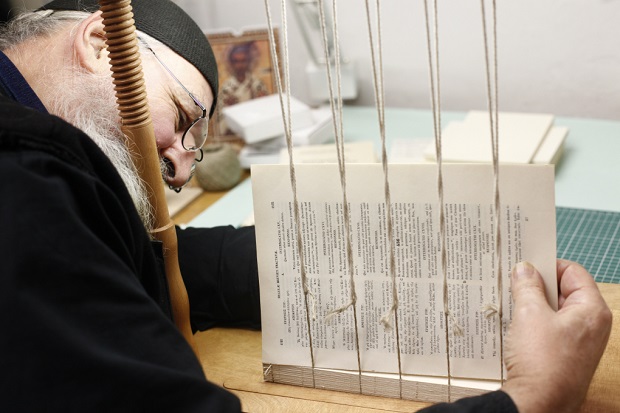 Even more numerous were the educated clergymen, chiefly of higher rank, who chose to end their days in the quiet of an Athonite monastery. Although they wrote no books, their presence decisively raised the spiritual level of Mount Athos.

The 18th century, a period of widespread spiritual, social and economic recovery throughout the East, was marked on Mount Athos by two important events: the founding of the Athonias School and the KoUyvades spiritual movement.

In 1748 a school was established on the initiative of and with funding from Vatopaedi, on the monastery’s boundary. It had an ambitious programme of studies including Greek, philosophy and theology. The school, which became known as the first Academy of Hellenism, was housed in an imposing building on a hill near the monastery, and many of its students went on to become well-known men of letters. The first headmaster was the famous Evgenios Voulgaris, who ran the school for many years.

The “kollyva controversy”, as it later came to be known after the boiled wheat offered in memorial services, broke out in 1754. The ostensible cause was a disagreement over whether memorial services should be held on Sunday, and not only on Saturday as had been the tradition up to that time. The real reason went much deeper, leading the monks to split into two warring factions: the defenders of tradition, the “Kollyvades”, who insisted not only on a strict adherence to tradition but also a return to the roots of the patristic and ascetic theology of the great Fathers of the East, and the supporters of a more secular approach to the monastic life. The chief proponents of the Kollyvades were distinguished Athonite scholars such as the prolific Nikodemos the Athonite, the combative Athanasius Parios and the former Metropolitan of Corinth Makarios Notaras.

The Kollyvades movement was condemned and persecuted at first, but was subsequently vindicated. It spread beyond Mount Athos, particularly to the islands and the Peloponnese, and led to the Philokalian revival that had such a profound effect on the Orthodox Slav world.