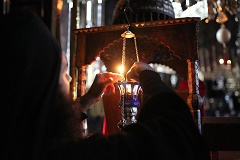 A brother once went to Abba Filika and took some laymen with him. He asked the abba to say something beneficial to them. But the elder remained silent. The brother continued to implore him for a long time until he finally said: ‘You want to hear something to your benefit?’ “Yes, Abba’. they replied. ‘There’s nothing to say any more’, said the elder. ‘Because when the brothers asked the elders and did whatever they were told, God provided the advice, so that those who asked would benefit. But now, because the brothers don’t do what they’re told any more, God’s taken away from the elders the grace to give advice. They can’t find anything to say, because nobody’s working on acquiring the virtues’. When the visitors heard this, they sighed and said: ‘Pray for us, abba’