The monastic life which developed in this way in the Church of Byzantium from its foundation in the 4th century to the 10th century has become one of the greatest factors in the Church’s life, its energy and its mission. The zeal of the monks who were living the coenobitic life and the presence amongst them of dynamic leaders who led monasticism to the height of its evolution, were the principal factors in the maintenance of the Orthodox faith and tradition in the Byzantine Church, throughout the Byzantine Empire.

The learned and renowned ecclesiastical writers of Byzantium and the East, as well as many of the great Church leaders who were honoured as Fathers of the Church were distinguished ascetics and monks, and they contributed considerably to the spread of monasticism by their writings and through the exercise of their pastoral work and responsibilities. (12) 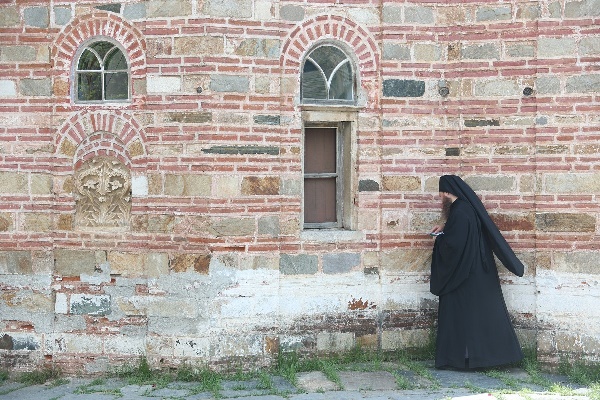 It is worth while to refer to the invaluable contribution of some of the Ascetic Fathers of the Church, such as St. Basil and St. Athanasius, in the definition of the Faith of the One Undivided Church and its confirmation by the Ecumenical Councils of the first eight centuries. (13)

Monasticism in Byzantium, in a similar way to that in Egypt at the time of the Desert Fathers and their followers, was the greatest bulwark against the heresies, iconoclasm and the papacy. These three factors of that time not only disturbed the peace of the Church in Byzantium but also gravely endangered the Orthodox faith. They all aimed to subvert it and to impose on the Church doctrines and beliefs foreign to those of Orthodoxy.

The Monastic Community later faced bravely the persecutions of the Crusaders and of the conquerors of the Byzantine Empire, and the religious proselytism practiced by the West during the Turkish yoke upon the whole of the Orthodox Church.

[12] Basil The Great, Gregory of Nazianzen or the Theologian, St. Athanasius, John Chrysostomos, Isidore of Pelusium, Serapion of Thmuis, Palladius, Epiphanius of Salamis, Diodoros of Tarsus, Theodoret of Cyrus, Theodore of Mopsuestia and others.

[13] St. Athanasius’ invaluable contribution to the definition of the Nicene Creed in the First Ecumenical Council inNicaea, in 325, is undisputable, “Athanasius’ theology was the outstanding obstacle to the triumph of Arianism in the East”. Basil the Great with his struggle and vigorous opposition to Arianism led to its defeat in Asia Minor and in Constantinople, and to its official condemnation. “The virtual termination of the Arian controversy at the Council of Constantinople, in 381, shortly after St. Basil’s death is a tribute to his success.” F.L. Cross, TheOxfordDictionary of the Christian Curch, 1974, 101,104. St. Gregory of Nazianzen, with his famous Theological Sermons, for which the Church honoured him with the title of Theologos (Theologian), has been the pre-eminent interpreter of the Trinitarian Doctrine.

[14] It is a fact that in the history of monasticism there have been periods of decay and downfall, at which some of the Fathers and great representatives, like Basil the Great, St. Epiphanius, Theodore of Studios, Eustathius of Thessalonica (and even some canons of the Vllth Ecumenical Council) express their dissatisfaction and complaints. Their intervention in many cases helped to bring monasticism back to its true principles and ideals. Basil’s Epistle op.cit. and III294. StEpiphanius, Contra Haereses 80,I., Theodore of Studios in his Epistles, (PG) 99.2, 107.147. Eustathius of Thessalonica in his work: (PG) 135. 729 ff.