The Journey in Cavafy’s and Fr Moyses’ poetry

Also, according to Cavafy, even if you think that you have been deceived, because Ithaca has been proved poor, you should just bear in mind one thing; the wisdom you gain from Ithaca:

If then you find her poor, Ithaca has not deceived you.

As wise as you’ve become, with such experience, by now

you will have come to know what Ithacas really mean.[74]

The importance of Ithacas is the wisdom which they provide. Everyone gains wisdom (‘as wise as you’ve become’),[75] if he persists in reaching his Ithaca. Cavafy declares that there are many Ithacas, implying that everyone has his or her own goal. Once you follow your destiny and try to fulfil your goals, the whole process through to the end will make you a wise person. 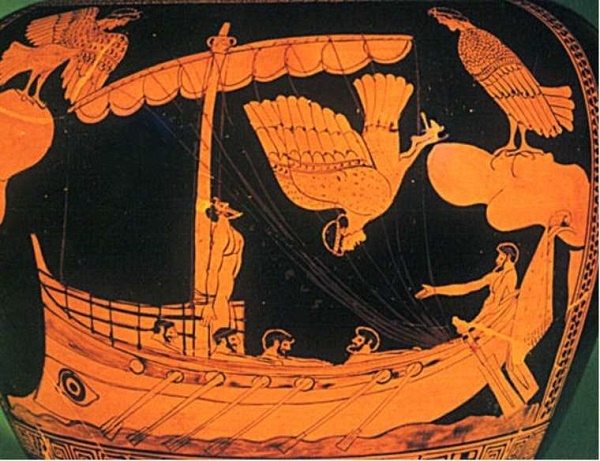 In general, Cavafy speaks about a spiritual journey with a final destination: Ithaca. Ithaca, which is the goal in life of any person, should always be in his mind and constitutes the motive for reaching the goal. Nonetheless, the importance of this journey is not only to reach the final destination, Ithaca, but the experience someone gained, throughout this journey. The journey provides a person with three prominent ideals, that he needs: wisdom, experience and knowledge.

According to Cavafy, these are the values that someone should gain throughout his life. The main characteristic of the poem is the atmosphere of counsel, since in the whole poem, Cavafy advises his reader what he should do until reaching his final destination; what ideals he should seek to find and gain during the journey. In addition, Cavafy advises his reader to pray for a long fruitful journey in order to understand its benefits.

You can always find a ship

to travel and forget

to leave or find the calamities[79]

In the above lines, Fr Moyses maintains that we can always travel if we want to forget. Fr Moyses uses vocabulary which recalls Cavafy’s poem. In the former’s poem, we see words like ‘να ταξιδεύεις’ (‘to travel’) and ‘καράβι’ (‘ship’), while in the latter’s poem we have words like ‘ταξείδι’ (‘travel’) and ‘λιμένας’ (‘ports’).[80] In both poems, we have similar words which describe a journey and allude to port and ship. This element makes the atmosphere in the two poems identical, as both describe the same scenography: a ship leaving or arriving at a port.

Moreover, the climate in the two poems is very similar, since we meet an identical tone which counsels the reader. Fr Moyses attempts to advise his reader in the same way that Cavafy does. As we have already seen in the above lines, Fr Moyses advises his reader ‘να ταξιδεύεις και να λησμονάς’ (‘to travel and to forget’), while in the next lines he exhorts him: ‘να μετράς τ’ άστρα’ (‘to count the stars’), ‘να λες εγώ γύρισα όλο τον κόσμο’ (‘to say, I went around the whole world’), ‘να γράφεις εντυπώσεις, ποιήματα’ (‘to write impressions, poems’), ‘να γυρίζεις στην Αθήνα’ (‘to return to Athens’). Then Fr Moyses continues in the same atmosphere of counsel: ‘ν’ αφήνεις κάτι πίσω σου’ (‘to leave something behind you’), ‘να σε θυμούνται με καλά λόγια’ (‘to remember you with fine words’), ‘να λες στα παιδιά σου’ (‘to say to your children’).[81]

During the journey, Cavafy’s reader should gain experience, knowledge and wisdom. This is what Fr Moyses exhorts his reader to do, as well. Fr Moyses states that we should leave and forget, go around the world in order to gain experience and knowledge, through travelling, and count the stars, alluding to a process of spiritual pursuit, which presupposes wisdom. He also advises us to keep notes on these experiences and write poems, which is also a spiritual work to gain wisdom. He also says that we should leave something to our children in order for them to remember us.