«One evening in a not so fashionable taverna, a young Chinaman came in with his merchandise displayed on a wooden tray hanging from a strap round his neck.

A host of trinkety things were glinting on there, both weird and not so strange. My eye was caught by some cheap-looking little red plaster birds. Each of them was standing on a plastic tree trunk, without even a dry leaf to indicate that there were better times.

At the end of the trunk there was a little button, like a protruding knot. You pressed it and the bird sang.

I quickly grabbed three, as if there was a fear they’d fly away. I didn’t ask how much each cost, and didn’t ask for a reduction for buying in bulk.

The people there with me asked: “OK, one, but why do you want  three?»

I answered: «One of them will sing. The second will be at hand to change the battery as soon as it’s dead. And the third will turn the pages with the notes of the song and hang on to them so that they’re not swept away by the tempest of modernity». 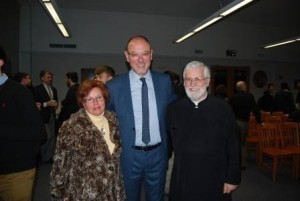 But every now and then it’ll run to the door, worried, to see if humanity’s coming. As a figure of speech. Worried, if, among them, there’ll be above all the decisive word: audience. How awful if it doesn’t turn up. It’s for this audience that we learn to sing a little or to hold our peace, gradually sinking into that deceitful word: help… help… that we gurgle out to seek.

However loath we are to confess, it’s becoming ever clearer that we all live for a charming, tireless audience within our being, sinking slowly into the deceitful word: expectancy.

And as I was explaining myself, a waiter came up to me and bent over to give me a little silk bag. ‘It’s from that foreigner’, he whispered.

I drew from it an exquisite little bird. Absolutely real. You could tell from the way it flapped its wings in the air. And just as real was the bright green leaf that there was on this trunk. Proof of this is how tremulously it shook in the distant wind of differentness (if there  is such a word).

I’m not an atheist. I dream of my neighbor, but I trust the one who’s far way. Like everything that’s far away’.