Idomeni, an Insufferable Trial of Civilization and Humanity

Eve of All Souls

Another visit by the Autonomous Intervention team from Neapoli, Thessaloniki, to the suffering people at Idomeni. And this was perhaps even more of a landmark. Saturday of All Souls and you set out for the poor souls who are piled together between closed frontiers, hounded out by catastrophe, making their way forward through suspicious territory, with hope as their basic, if not their only, baggage.

You drive along and your mind goes to tomorrow’s Gospel reading. ‘I was a stranger’. He reminds us of it twice. You eat up the kilometres and wonder what you’re doing, how much it helps and what it is you’re not doing. Hugely significant. 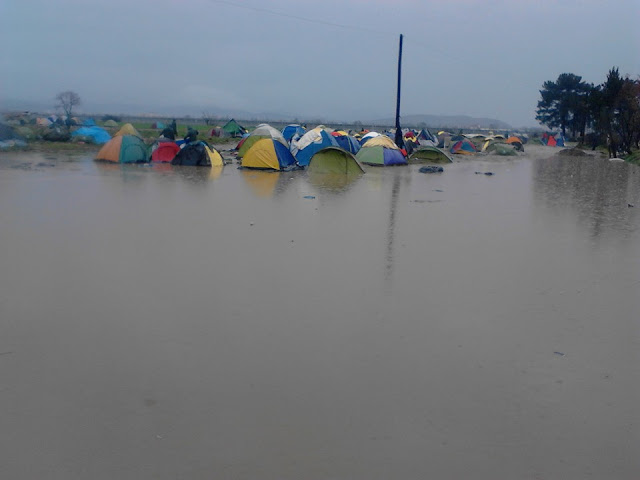 The sun’s hot, which is a comfort, since it’ll dry out the mud from the storm the day before yesterday which soaked into the misery and made it proliferate. A temporary relief.

You’re nearly there. A few scattered bunches of people are trudging along. They’re going to add to the chaos and the despair. The hired coaches from as recently as a month ago are a thing of the past. 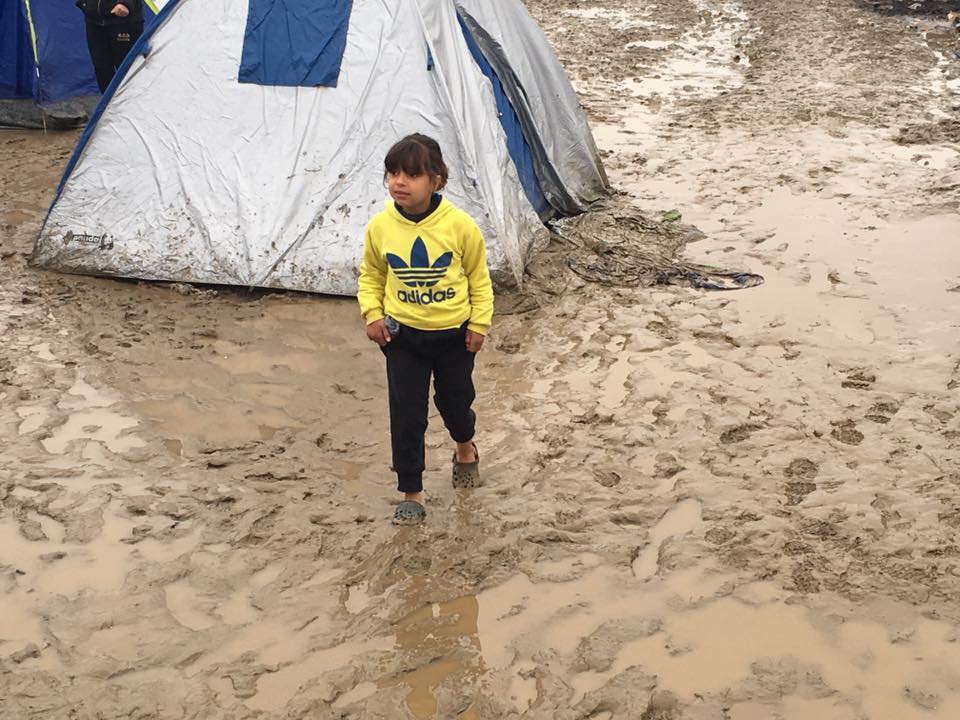 You arrive. The place is packed. Hordes of people on the narrow little road. Coming and going, but going where? Countless cars in a long line. A sign of compassion? People getting up and milling around. All Souls’. They’ve brought things here for their memorial services.

The cars empty. The first passengers are an instant attraction. The dilemmas kick in. Everything you give immediately attracts a swarm of people whom need has made fractious. 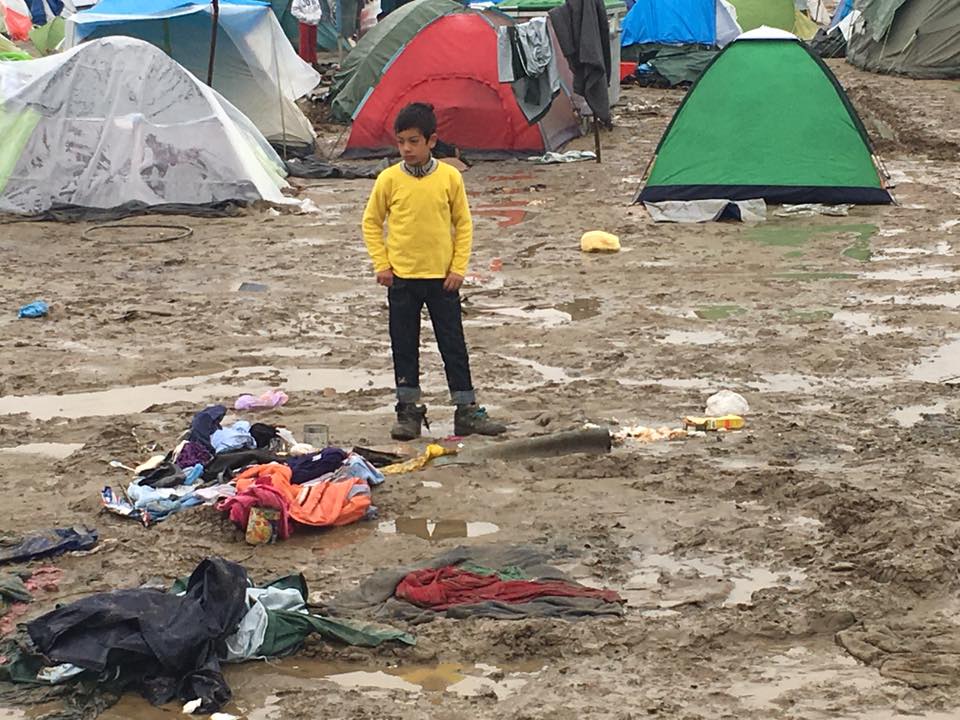 There’s a grandfather at the edge of the road, alone, in a wheelchair, with Eastern-style clothes. Which modern Aeneas snatched him from the flames, I wonder, that he’s come to rest in a place unknown, in a field in a far-away little spot called Idomeni? The grandfather has a band around his eyes- for the sun, for some sickness- and he’s shaking his head and murmuring. What’s he thinking about, what’s he mourning, what fate is he grieving over, what memories is he saying goodbye to?. 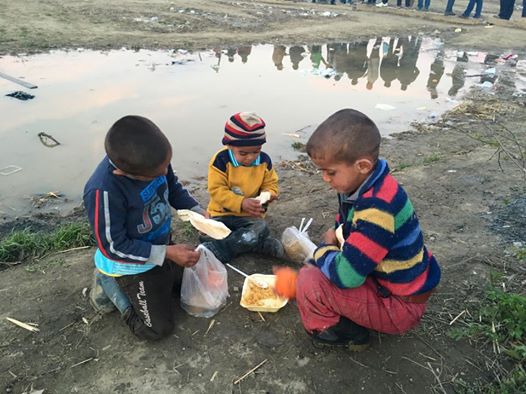 After quite a walk, you reach the appointed spot. The food will be packaged so that it’s ready for distribution. Other organizations, other teams are also close by. You count and recount, presences and absences. Bitter thoughts; forget about them for now. 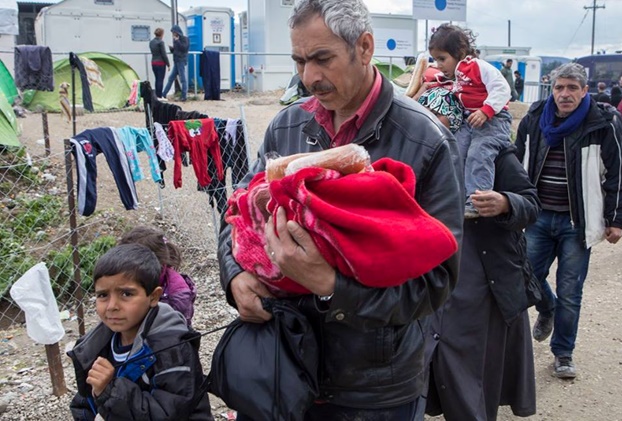 People gather. Lots of them. They form queues by themselves. Men in one, women in another. Just like every day, says the ‘Ikopolis’ group, which has the long and heavy responsibility of being here on a permanent basis. 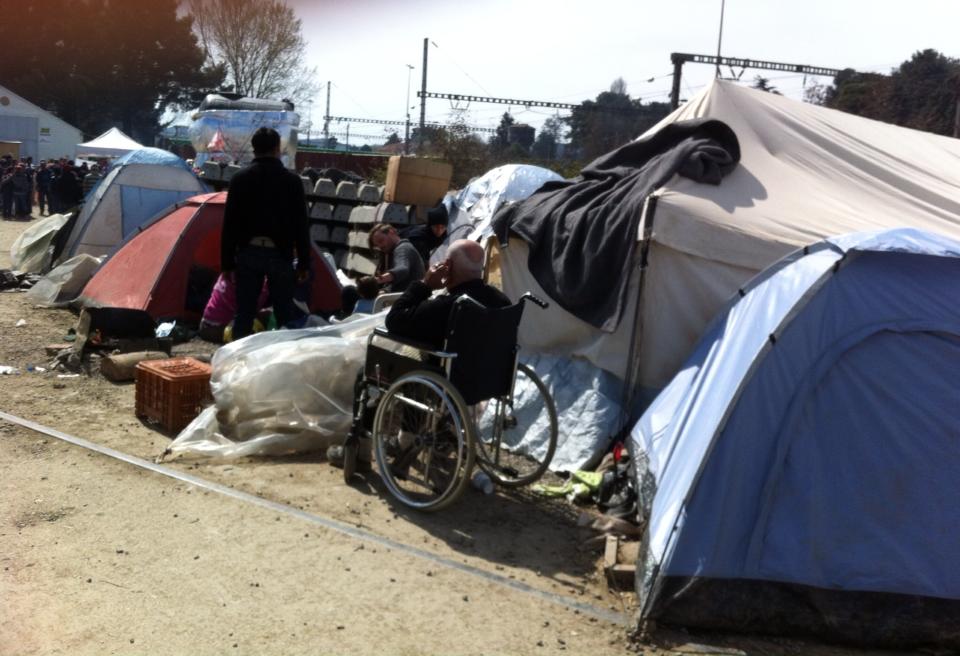 Things get off to a better start than we’d expected. People pass through patiently, keeping good order, recognizing better than anyone, perhaps the magnitude of the problem. Some seem to prefer not to be idle and come to help, valuable assistants. They speak the language, explain, never seem to tire, serve their own folks as well, bother some of us. Everything’s very human. 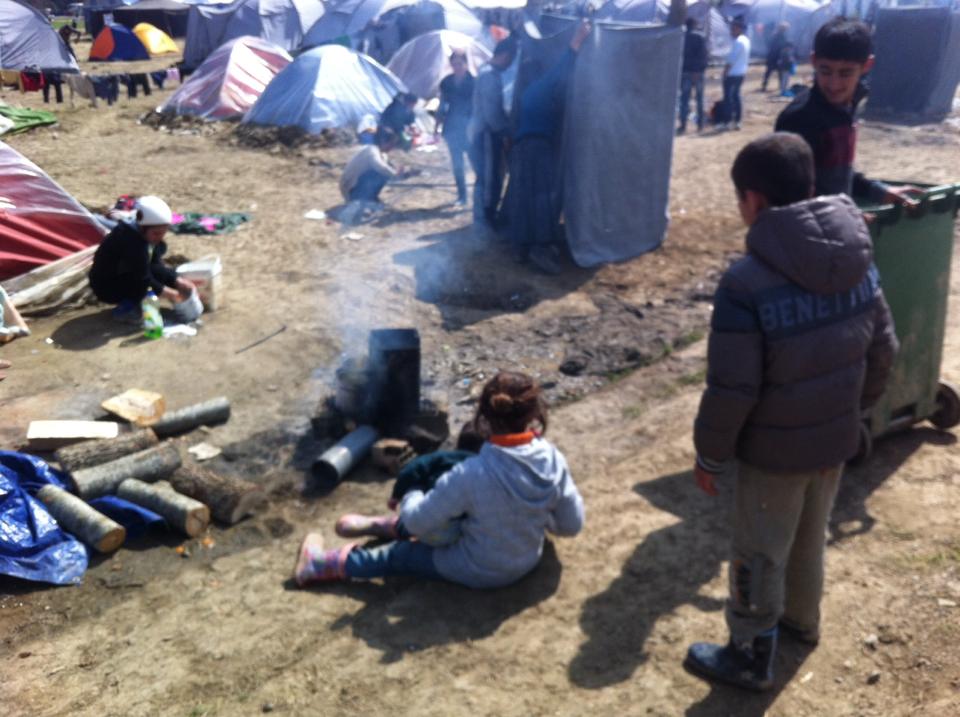 Crews of journalists everywhere. With cameras and microphones, they move about, expressionless. Most of them aren’t Greek. Certainly the most professional people in this whole throng. You gather this from an interview you give to one of the neighboring channels. 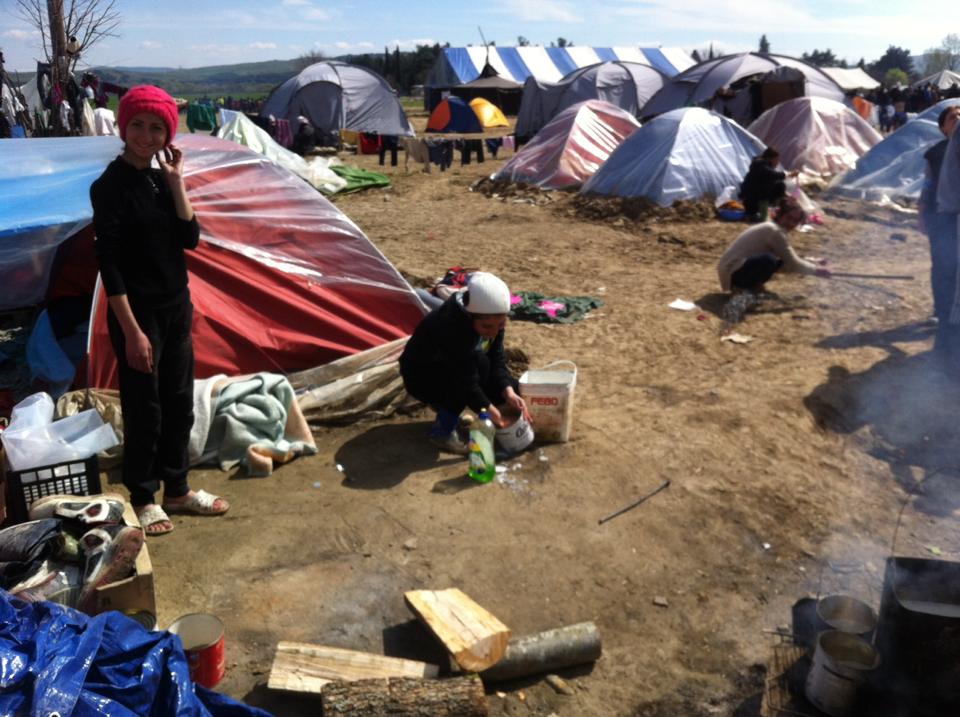 Two or three people are helping next to you. Foreigners. One of them’s a Syrian. He had a lorry back home, he says. Everything’s gone. Now, he points to a tent a little further on with all his belongings in it. 4 children and his wife. The youngest’s 2 years old. Another one’s from Iraq. ‘Daesh’ he says and passes his forefinger in front of his throat. ‘I escaped being slain by what you call ISIS here’. The third’s a European from Hungary. He came here with his girl-friend to help. They’d been to Lesvos, FYROM, Serbia, Slovakia, Austria and Hungary. The whole route. ‘Where was worst?’ I asked. Without hesitation he answers ‘Hungary’. People and countries being ground under the millstones of history. 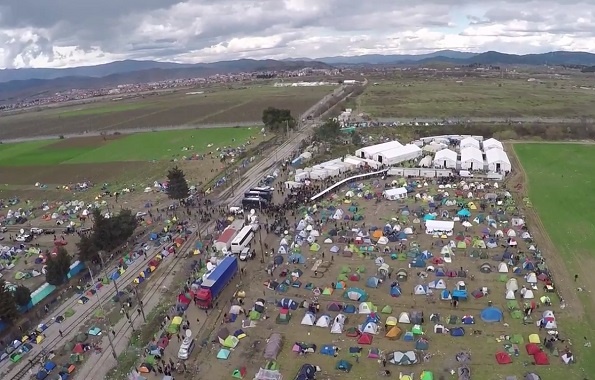 The hours drag by.  Tiredness sets in. The team gradually divests itself of the rations. Obviously, some people are coming by more than once, but what can you do? Most ask for second helpings. Others want to skip the queue. Pregnant women, sick people, the elderly. In this pandemonium you have fractions of a second to do the right and fair thing. 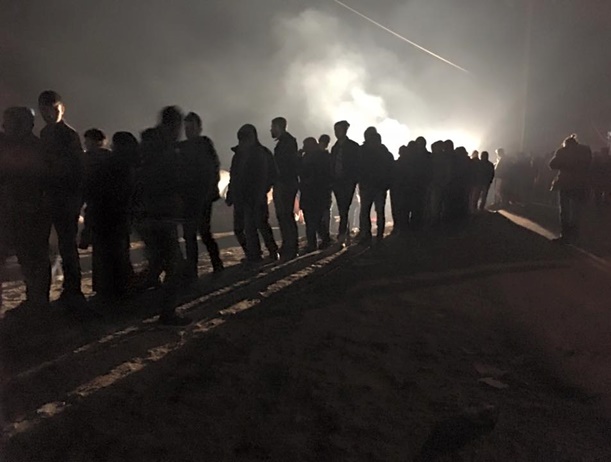 Dignified looks that seek and pierce you. Kids everywhere, under your feet, asking for things. You fear the crowd that could become a mob and trample indiscriminately on gravel or fallen bodies. A child of 2 or 3 years old keeps falling over in front of you. You pick it up and soon afterwards the same thing happens. At one point it becomes entangled with the protective netting/partition and bawls inconsolably. No parents anywhere. A volunteer takes it off somewhere, away from the crowd. But it’s already dark – what’s going to happen?

There’s not much left by way of food. Some people come by, indifferent to the little that’s being handed out, others persist. Fires are being lit round about, rubbish being burned. The throat catches, with the smoke and bitterness. 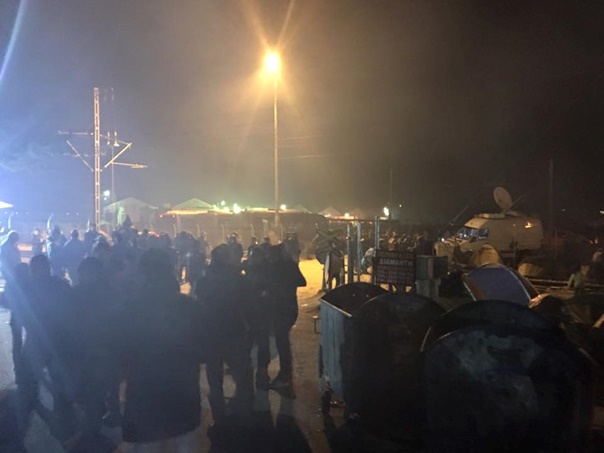 A seven-hour shift ends, with four hours of unprecedented tiredness. You merge into the crowd for the return journey. All around you, a host of people stumbles about in the darkness, in a wretched state. Incomprehensible scenes everywhere: queues without discernible end stretch into the night, piles of logs, a superficial insouciance, families huddled into tents, dog-tired people, children’s gazes full of questions, a group showing a film on the side of a van, the laptops and satellite communications of the reporters, a complete muddle over the coming night, countless tents in the fields, scenes from a living nightmare.

The road back. To the comfort zone and the daily round. The horror will find its own place. The needy and the destitute will lag behind. Exhausted, you feel images and thoughts flying around out of control. You remember the reading again. And again you wonder.