The Lazarus Carols, from Cyprus to Tataoula 23 April 2016 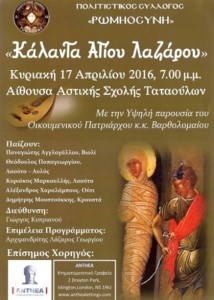 Beloved brothers, sisters and children in the Lord,

The typical feature of the Greek people was and is the preservation of ancestral tradition. Modern times are characterized, if not by the abandonment and rejection of the ancestral customs and morals of the nation, then at least by a disregard, which, in the long term, unless we stand up against it, will result in the creation of a generation without memory, without roots in tradition. And we all know that a tree without roots has no sap, nor has it life. It quickly withers and ‘is cast into the fire’ as the Gospel puts it. 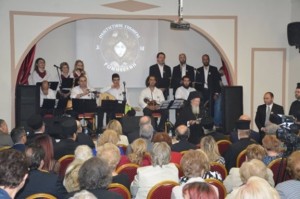 So, as the Archbishop of Constantinople and shepherd of the flock in this city, a flock which your Association makes an effort to express in cultural terms, we are justly pleased, because today’s event demonstrates that there are others, outside this city, in far-away places where members of the suffering Greek people dwell, where time passes more slowly and where development does not equate to the adoption of imported, foreign and malevolent habits. There are still areas where the genuine expressions of the Greek soul are preserved and fortified, and where its customs are still observed, as is the case with the ‘Lazarus Carols’ which we have heard performed so well today. This is a tradition which has been handed down from generation to generation in the Greek East and has the meaning of a feast of joy before the Resurrection, expressed in a simple manner.

For the Orthodox Church, Lazarus Saturday is a feast of the Lord, a foretaste of Great Week, and the victory of life over death. It is a day of joy, which prefigures the joyful sorrow of the Holy and Great Passion Week, the Cross, and, finally, the Resurrection of Christ. Our Church sings ‘Christ our God, before Your Passion, You raised Lazarus from the dead to confirm the common Resurrection for all’. In the ‘Song of Lazarus’, the faithful people of Cyprus sing ‘Spring has come to us, telling everyone of the strange and dread sign of the raising of Lazarus. Fragrant flowers and roses, compunction of the soul’, expressing their own experience of the event. 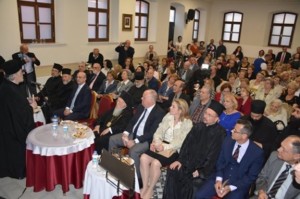 So the resurrection of Lazarus heralds the springtime of the Resurrection of our Lord, the springtime of our souls. This is why it is a particularly popular feast, honoured in the past with a variety of customs throughout the Greek realm. Events such as today’s give us hope that these disregarded customs, which are so important for the identity of our nation, will be revived, that the flowers of Lazarus, held by the ‘Lazarine girls’ will blossom again and will once more imbue the faith of the people with their scent. That is, the aroma of the Resurrection, the aroma of our ancient devotion and reverence. 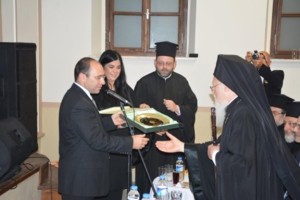 But there is also, in the Lazarus carols, another characteristic point which should be noted: the participation of young girls in the celebration of the custom, the Lazarines, who sing and announce the joyful feast. They rush out into the meadows and gather flowers to decorate their baskets, recalling, with these flowers, both the mourning and the joy of Martha and Mary, Lazarus’ sisters. This joy is also mentioned by Andreas the Blind: ‘Rejoice, Mary and Martha, his sisters. Tomorrow Christ will come and raise Your dead brother to life. Bitter and unsatisfied, hell will hear His voice. Shaking and groaning, it will release bound Lazarus’. (Lazarus Saturday, Vespers).

The participation of the smiling girls in this feast and the central role which the flowers play alternate, in a contradictory way, with the expression of wonder and fear which the Orthodox faithful feel over the descent of Lazarus into bitter hell, through death, which is lurking at every moment:

‘Tell us, Lazarus, what you saw

In Hades when you went there.

I saw fears, I saw terrors,

I saw torments, I saw pains.

Give me just a little water’

To wash out the poison.

I’m speaking from the heart,

And lament and weep’.

The same questioning is also to be found in our Church tradition, according to which, once Lazarus had been raised, he rubbed his mouth three times with honey before any time he ate, in order to get rid of the bitterness of hell. Another Church tradition also teaches us that once ‘unlaughing’ Lazarus saw a villager stealing an earthenware vessel. He then laughed for the first time after his resurrection and said the proverbial phrase: ‘The clay is stealing the clay’.

Here in Tataoula this evening, unlaughing Lazarus and the laughing Lazarine girls have made a charming contrast, which symbolizes the overthrow of death and the crossing over from death to life. This same contrast of the passage of death to life, my brothers, sisters and children, also characterizes our nation, especially the Greeks of Constantinople, as voluntary participation in the sufferings, the cross and the resurrection of Christ and of the Orthodox Roman* believer and is what distinguishes us as people, as a people, as a nation and as the Great Church.

This song of the contrast between life and death and of the victory not of this fleeting existence but of eternal life, in other words, the victory of the risen Christ, Who raised the four day dead Lazarus, has been sung for us this evening by the members of the ‘Romiosini’ Association, from Paralimnio in Cyprus. We would like to thank them for repeating their custom in our city. Thank you for the song. Thank you for the message you gave us through it, that is the Lazarus Carols, which is also our personal experience, as it is yours on the Great Island. This song which, from the lament of death is always transformed into the joy of the resurrection. Naturally, for those who are able to believe in it and do not foolishly think that everything ends with the grave.

* Through the text His All-Holiness uses the words ‘Romios’ and ‘Romiosyni’, which, of necessity have been translated as ‘Greek’. He speaks as Bishop of New Rome and these words convey the sense more of ‘Byzantium’ – an inaccurate term which originated in Western Europe. They express a continuum with the empire which was centred on Constantinople/New Rome and with the long years of subjugation under the Turkish yoke. 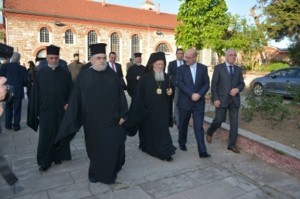 ‘And may we all be able to glorify the bright resurrection and our all-powerful God. Long live you all and your children. May Our Lady and Saint Lazarus be with you’.

* Through the text His All-Holiness uses the words ‘Romios’ and ‘Romiosyni’, which, of necessity have been translated as ‘Greek’. He speaks as Bishop of New Rome and these words convey the sense more of ‘Byzantium’ – an inaccurate term which originated in Western Europe. They express a continuum with the empire which was centred on Constantinople/New Rome and with the long years of subjugation under the Turkish yoke.