The Meaning of Infant Baptism and Naming

Baptism in the Ancient Church

In the first years of Christianity and at the time of the persecutions, no-one could be baptized unless they had first gone through the stage of catechism. When someone the bishop didn’t know wished to become a Christian, the responsibility for the sincerity of their motives was assumed by someone who was already a Christian, whom we know today as godparent. This person was a guarantor of the candidate in the eyes of the Church. Thereafter, candidates were enrolled in the registers of the Catechumens in the local Church and began their ‘apprenticeship’. They learned all the teaching of the Gospel of Christ concerning salvation and were initiated into the Church’s way of life. 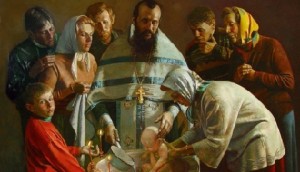 In the Church of Rome, catechism lasted two years. The catechumens took part in the prayers with the Christians and stood in the narthex. After a certain point in the Liturgy, they were obliged to leave. The deacon gave the order ‘Those of you who are catechumens, depart’. Only the faithful remained in the church, because only those who’d been baptized had the right to take part in the Divine Liturgy. When the catechumens had completed their education and been tested, then they were baptized, usually at Christmas or Easter. Today this form of catechism is to be found mostly in mission areas.

While there had been infant baptism in the Ancient Church, it did not become widespread until the 4th century. A lot of people wonder today whether infant baptism’s right or whether we should return to the practice of baptizing people at a more mature age. To this understandable question we would reply: a) Infant baptism is an example of the Church’s love for children. The Church doesn’t want to deprive infants of the redemptive Grace of the sacrament of baptism. It doesn’t want to leave them for a long period at the mercy of the devil. It agrees to baptize them in order to place them in the arms of God and in case they die unbaptized and are deprived of salvation. This is why it also allows baptism of necessity (in air, or with sprinkling). This baptism by dispensation can be performed by a lay person, man or woman; b) The children who are baptized are the children of Christian parents, members of the Church. It’s the Christian parents who, by their own choice, bring their children to the Church and ask for them to be baptized; c) To those who claim that infant baptism is a violation of the child’s freedom, since it’s being baptized without being asked or giving its consent, we would answer that, by the same token, the parents shouldn’t have brought the child into the world in the first place without its consent. Nor should they send it to school, or give it injections and so on. Parents who bring children into the world have a responsibility and they decide what’s best for the it until the time it becomes an adult (without asking for its consent beforehand). In any case, when the child grows up, if it wishes to leave the fold of the Church, it has the right and the freedom to do so.

According to the ancient Church order, the name is given on the eighth day after birth and there is a special service for this in the Book of Prayers. Many countries give parents the right to register the birth and name of their child before it’s baptized. Today, though, the naming of the child is, by and large, linked to baptism.

The name given to a child must, necessarily, be Christian, so that the child can have its patron saint as a shield and model in its life.  Unfortunately, friction has been created in this matter by random choices. Some people insist on giving unsuitable names, or two or three names, which usually brings the grandparents into conflict. This petty-mindedness and stubbornness puts the Church in a very difficult position. In the end, instead of addressing the child by its real name, we often use a nickname taken from a clumsy shortening of one name or the inept combination of more than one. We should not forget that the name of the child is destined for eternity, so that perspective in itself lends it sanctity.