Religion / Biblical Theology / English
Miltiadis Konstantinou, Professor of the School of Theology of the University of Thessaloniki

The Gospel for the fourth Sunday in Lent, Mark 9, 17-31), presents Jesus as coming face to face with an ancient problem which affects the whole of humanity: the ability of people to overcome evil. For as long as there have been people on earth, evil in its thousand and one forms- poverty, hunger, wars, refugee crises, sicknesses and death- has held sway over their lives, suffocated their hopes and, often enough, driven them to despair. Philosophers, economists, politicians, scientists, religious leaders and even soothsayers have, for centuries, struggled against it on a daily basis. Sometimes more successfully, at other times less so, the human race has managed to make some progress towards the improvement of the quality of life, but, like the Hydra in ancient mythology, evil itself has remained invincible.

His disciples put this problem to Christ when, while He was on Mount Tabor, where He was transfigured, they were attempting, without success, to cure an epileptic child. If, on Mount Tabor, the glory of Christ as God appeared in all its majesty, below, in the villages of Galilee, human misery and pain continued to be the order of the day. At the time when Jesus was on the mountain, a despairing father brought his sick child to the disciples to be cured. But they were unable to help. The people closest to Christ failed to free someone from the pain that had tormented him for years. Then the father summoned whatever resources of faith remained to him and addressed Jesus Himself. 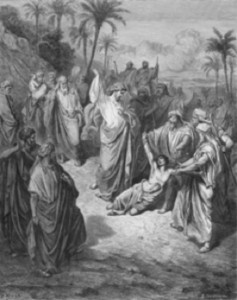 Jesus asked him if he believed and he, calling upon the last ounce of his spiritual strength cried: ‘I do believe, Lord’. But at the same time, recognizing his limits, he added: ‘Help my unbelief’. In his efforts to proclaim his faith, all he managed to do, in the end, was to declare his inability to believe completely. Respecting his sincerity and his agony, Jesus gave him what he’d been longing for for years: the healing of his child. The disciples, however, continued to be tormented by the problem and, as soon as they were alone with Christ, they asked Him why they had been unable to help. Jesus’ answer was brief: ‘The only way to defeat evil is through prayer and fasting’.

At this point, Saint Mark the Evangelist interrupts his narrative. He says nothing about the reaction of the disciples, nor whether they understand Jesus’ response. But the modern reader will certainly have numerous questions left unanswered, since it’s difficult to accept that the problem is really so easy, difficult to claim that prayer and fasting are enough in themselves to solve all of the problems of humankind. Besides, it’s easy raise an objection to Jesus’ answer: thousands of people pray and fast throughout their lives, but nothing’s changed in the world.

Jesus’ response is surprising because people today have become used to dealing with problems in a dynamic fashion, with action and decisive actions, among which it would certainly be difficult to include prayer and fasting. On the other hand, in the minds of many religious people, prayer has become associated with personal requests, and fasting with an attempt to placate God. People pray for their work to go well, for their children to get on, for God to grant health or whatever else they need.  And they fast because they’ll be in God’s good books and He’ll reward them when the time comes.  But this isn’t the kind of prayer and fasting that Christ taught people.

If you look carefully, you’ll notice that, in the Orthodox tradition, the pronouns used with verbs invoking God in prayer are always in the first person plural and never in the first person singular. ‘Our Father’, ‘give us’, ‘forgive us’. Nowhere do we say ‘My Father’, ‘give me’ or ‘forgive me’. There’s only one prayer which uses the first person singular, and that’s the prayer of Saint Efraim the Syrian, but that’s when the person praying is asking God for the opportunity to live in communion with others. It’s only when the subject matter of the prayer of Christians is the salvation of the whole world, when Christians realize that they can’t live happily if there are unhappy people around them, that we’ll have made strides towards the solution of the problems of humankind.

The same is true of fasting. From the time of ancient Israel, the prophets of the Old Testament envisioned the coming of the Messiah as a period when all conflict would be resolved, even in nature. Fasting isn’t an indication of piety, but a conscious act of giving up certain self-evident rights- such as, for example, the right to food- a declaration that someone is prepared to sacrifice something of themselves for other people and for the whole world. This is the fasting that |Christ asks of us who believe in Him, because this is the only fasting that can save humankind.

It may seem that these are small steps and probably most people doubt their efficacy. It’s true that the world can’t hope to be saved with a few prayers and fasts. But when the prayers and fasts are performed conscientiously they can help an increasing number of people to become aware of their role and their responsibility for the salvation of the world. And it’s certain that a society made up of conscientious Christians, of people who’ve made it their aim in life to bring into being the Kingdom of God, is the greatest hope for humankind today. Today, when everybody knows that the certainties and great world theories have all failed, it may be time to try the solution proposed by Christ. In any case, He Himself makes it clear that believers can achieve anything they want. And if anybody doubts the efficacy of this, it may be that the cry of the tragic father in the Gospel reading we mentioned above may be particularly effective: ‘Lord, help my unbelief’.