Christ is the Resurrection and Eternal Life

Christ’s new commandment isn’t simply a command to love in the general sense. That, in any case, is innate in people and we all, to a greater or lesser extent, love our fellows. What is new here is: ‘As I have loved you’. ‘If you love those who love you, where is the grace in that? For even sinners love those close to them’ [4]. Christ was sacrificed for others.  And ‘as I have loved you’ means that believers should sacrifice themselves for others, too. Love which embraces one’s enemies is inconceivable and utopian without the resurrection. And the resurrection is the triumph of love.

It’s clear, then, that the resurrection, and love, these two basics of the dogmatic and moral teaching of Christianity respectively, are not theoretical, ideological formulations, but empirical truths, which the Apostolic community experienced and passed on to the Church, guaranteeing them in historical terms by the Apostolic succession. Christian truths aren’t ordained from heaven, but are manifested empirically, within history, through the active presence of the Word of God and the collaboration of humankind. This means that their adoption by people within the flow of history should not have a theoretical or ideological character, but should be experiential and empirical. 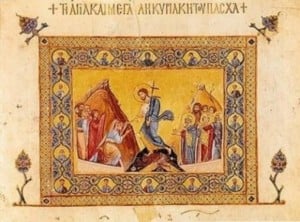 At the beginning of the Anaphora in the Divine Liturgy of Saint John Chrysostom, it says of Christ: ‘when he had come and fulfilled the whole dispensation for us…’. What is this ‘dispensation for us’ that Christ performed in the world? It’s the perfect submission to the will of God the Father, which extended as far as the Passion and death on the Cross, and was then completed with the Resurrection. What people did and continue to do, that is disobedience to the will of God (which has as its concomitant the just subjection to the law of death) was set to rights by Christ by His perfect obedience and unjust death.

The resurrection of Christ has no significance in the life of Christ, Who, as God, is immortal. It is of prime importance for humankind, however. What Christ did and what He suffered, He did for us, fulfilling the ‘dispensation for us’ and, at the same time, pointing out the road we were to follow. God did not become human and wasn’t sacrificed for humankind so that we could continue in peace and accept salvation passively, but rather so that we, too, could follow the same path, copying His example and observing His commandments.

The resurrection and entry into eternal life aren’t abstract ideas or theoretical dogmas, but states which have been manifested within the world following the coming of Christ. They’re experienced empirically by every human person who really believes in Christ and lives partaking in the sacraments of the Church. In the final analysis, resurrection and eternal life are Christ Himself [5]. He takes each and every one of us into His body as a special and unique person. He’s the ‘first-born of the dead’ and ‘the land of the living’ And He is able to promise ‘eternal memory’ to those who have departed, as a share in ‘the first-born of the dead’ and citizenship of ‘the land of the living’.

We have a foretaste of the resurrection empirically through love. The Apostle and Evangelist John the Theologian writes: ‘We know that we have passed from death to life, because we love one another’ [6]. Experience of love opens up new horizons for us, which extend beyond the immediacy of the senses.  It opens horizons of existential knowledge and real freedom. Real Christians don’t believe but know that they’ve passed from death to life. At the same time, this passage sets us free from the fear of death and offers us unlimited freedom. As has been aptly observed, where there’s no freedom and love, everything loses its meaning [7]. The most practical knowledge is intermingled with love. Love is the self-offering of a person to other people and the assimilation of others into oneself. Through it, people are set free from egocentrism and discover their real self in the persons of other people. In other words, love is the ‘accommodation’ of all in the body of Christ.

[7] See Archimandrite Sophrony (Sakharof) We shall see Him as He is, Essex.