The Resurrection of Christ is the Quintessence of the Divine Revelation

The Resurrection is forgotten in this day and age. Even the immortality of the soul is ignored. It’s typical that scientists who concern themselves with the human soul don’t usually treat it as an ontological feature of a person, but more as a biological function. People today live and die without any particular prospect beyond their biological existence and their biographical activity. Within this context, it’s not difficult to understand the widespread pessimism, no matter how much we want and try to abandon the hope that will be the last to die.

Death is the greatest and most permanent threat to humankind. And this threat doesn’t merely affect us, directly, when it comes, but also indirectly. It affects us in every phase and at every turn in our lives. With every illness and every pain, in every danger and every failure, behind every shattering experience, lurks the threat of death.

In former times, faith in some sort of life after death diminished the size of the threat somewhat. In the more modern age, people wanted to restrict, or even do away with the threat of death, as far as possible, with their faith in the progress of science. But it was not long before this, too, seemed to be utopian. So it would seem that today people are exposed to pessimism more than at any time in the past, despite our inconceivable progress in technology and the sciences. 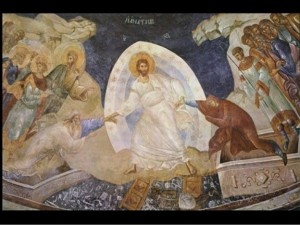 A rough review of ancient Greek thought and life reveals that belief in the immortality of the soul was widespread, or even, as Plato taught, that the body is a prison or grave for the soul. Death was therefore a blessing, since it liberated the soul from its bonds. Epicurus wanted to free people from the fear of death with the following sophistry: ‘Death’, he said, ‘is the most dreadful of evils’. But it has nothing to do with us, because ‘where we are, death isn’t; and where death is, we aren’t’.

We find a rather more profound treatment of death in the tragic poet, Euripides: ‘Who knows whether life is death or death is life?’ To this day there are people, some of whom have no connection with the Church at all, who talk about a fake life and real life. This life of ours is false and is lost in time. Real life is eternal.

When people reflect on their past, they see that, however long it is, it seems short. And no matter how many years they’ve lived, they’ve passed quickly.  Indeed, the older people become, the faster time seems to fly past. We often say that it passes like a dream. In any case, a dream is also a form of life, and can be very intense. But when we re-awaken to our normal life, we realize that it was false.

What Euripides posed as a question, what is expressed as a suspicion by the minds of ordinary people, with the variations which makes themselves manifest in time and in life, and finally, what the secret desire in our hearts is, what constitutes an ontological attribute of life itself, finds its answer in the death and resurrection of Christ.

Christ’s resurrection isn’t some wonderful event in His life. It doesn’t represent some sort of change in His persona. Christ’s resurrection is the quintessence of the divine revelation. It’s the point of departure for the re-creation of the world, the basis of the ‘new creation’, the foundation of the Church and its message: ‘If Christ has not risen, then our message is in vain and your faith is in vain’ [1].

The revelation which Christ presented to the world is His resurrection from the dead. This is, in any case, the only revelation, the only thing ‘new under the sun’ [2]. Every other revelation is within the limits of death. Christ is the only One who manifested the resurrection to the world. This is why Christianity is the only ‘revealed religion’, or, to be more precise, the only revelation. And the commandment of Christian love, which necessarily includes our enemies, is the only really ‘new commandment’. ‘A new commandment I give you, that you love one another as I have loved you’ [3]. This is not presented as a virtue of some new moral code. It’s a command which is applied at the personal level, within history, and is indissolubly linked to the Resurrection.