Jonathan Jackson + Enation have returned to the studio with Grammy nominated producer Greg Archilla (Matchbox 20, Collective Soul) to record Blame-shifter, their new EP they’ll self –release on their own label, Hilasterion Records (distributed through Sony RED) on May 13, 2016. Jonathan, on break from filming his hit TV show, recorded five new songs for the band’s EP plus a cover of “Unchained Melody” recorded live at The Grand Ole Opry.  The new songs will also be a part of their next full length album which will be announced later this year.

The past two years have been a whirlwind for the band. They partnered with Loud & Proud Records to release Radio Cinematic, which Billboard Magazine called “…contemporary, anthemic rock — Jackson proudly wears the influence of U2, Peter Gabriel and Coldplay on his sleeve as influences — is certainly something different…” and Rolling Stone said is “Filled with electric guitars, chest-beating vocals and swirling synths…”

For this release, the band decided to be fully independent again so they can be more interactive with their fans. They created a PledgeMusic pre-order campaign to allow their fans to be a part of the making of Blame-shifter.  Their fans will be the first to get the new EP as well as have access to exclusive experiences and items, which will only be available until April 5, including a variety of autographed merchandise options, a making of Blame-shifter documentary film, VIP meet & greet opportunities and even an executive producer credit on the album among other great selections that are still available.

“We’re so excited about our brand new music and the opportunity to hit the road and share it with our fans,” says the band. “We made a record that has its roots in the kind of alt rock and live energy we grew up with. Partnering with our fans through Pledgemusic has been invigorating and we can’t wait to play the new music on tour this summer!”

The Hi-Fi – Indianapolis, IN 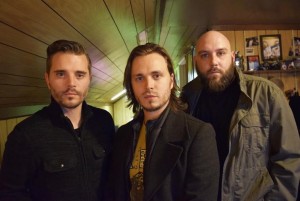 I sailed the ocean of my soul

I studied the waves

I flew across the great divide

I swallowed the flame

I nailed my ego to the wall

I took the blame

I’m on a distant shore

And my humanity is on the line

I’m falling through the cracks

And I don’t know what’s on the other side

I glimpsed the Great Humility

He took the blame

I studied the Saints I read their lives

They did the same

But there’s another way

The first time around we hid

Because the light was too much to bear

I’ve played my part with all

The pollution that’s in the air

To pray for the world is to shed blood

No amount of pain can kill your love

I hate the sins of my enemy

But I am the same

I will condemn myself again

I am to blame

I send out love to my enemies

I send out love to my enemies

I am to blame