Looking sin in the eye

In former times, a person’s relationship with the Church declared that the Church is life and its way is also the way of life. This is why, when people sinned, what did the spiritual guide give them as penance? The penance was not to take communion (Who would worry about that today? They might even be ironic abut it ‘I don’t take communion anyway. Once a year. If you tell me not to take communion, that’s no big deal. Next year. If everything goes all right, I’ll be back next year). Do you see how the deterioration starts? To be a Christian used to mean celebrating the Resurrection every Sunday, people went to the Eucharist and took part in the Eucharist. And if they didn’t go three times a year, without health reasons to prevent them, the Church cut them off from its body. Who among us is concerned with this issue today? Even more, who would be concerned at being told to abstain from communion? As if they took communion before being told not to. 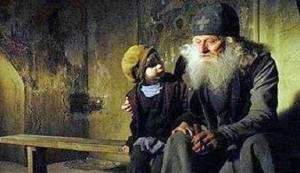 So the essential relationship, and the way it was expressed, used to be: ‘The requirements exist for a way of life and that way of life is expressed through participation in the Eucharist. Christ is life. When we take communion, what are we doing? We’re acquiring life, too. Sin cuts me off from the Church and the expression of this is that my confessor gives me a penance of not taking communion for a while’. Then comes the question: How much does this hurt us? How much does it trouble us? Since none of the preceding factors exist, it’s inevitable that we’re not going to be concerned at all. There’s no Christ as life; there’s no other way of life; there’s no Eucharist in our life; there’s no Resurrection on Sunday; and to get our children to go to church, we often tell them that they have to go. What does ‘have to’ mean here? Why ‘have to’? If people don’t recognize this event of the Resurrection in their everyday lives, why go to church?

We look sin in the eyes now. And we have a double opportunity. In the first phase, of course, we repent- or sometimes we repent- over what we’ve done. Do you think that’s enough? That we’ve repented. Because within ourselves we feel guilty about what we’ve done. We’ve got regrets. Well, this is very much the beginning stage which can easily become twisted. In what way? If it becomes egotistical repentance. If we start to become disgusted with ourselves, to put it simply, because of what we’ve done (‘How could I have done such a thing’) and the pointer shifts away from what I’ve done and towards me myself, my ego. In the end, these feelings of guilt act merely as a ‘release’. They don’t function as repentance. Literally they act as a release. We have a bodily ‘release’ which brings us relief. And therefore a feeling of repentance. But that’s not repentance. Our lives are full of such feelings of regret which haven’t brought anything to us. It’s like that sarcastic joke which says: ‘Mistakes are there to be repeated’. Regret doesn’t produce anything when it’s viewed in this distorted way.