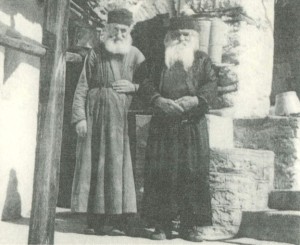 He was born in Lamia in 1894 and his name then was Christos Kontonikolos. When he was young he was a cobbler in Halkida, on Evia. He was ten years old when his father died. He was immersed in the waters of piety by his mother, who ended her days as Sister Magdalini, a nun of the Great Habit.

In 1923, with divine zeal he entered the Athonite arena. He loved the wilderness and his soul found a haven in the delightful quiet of the desert of Katounakia. There isn’t any greenery, any trees or birds here, just unyielding rocks. The harshness of the location brings sanctity to the souls of the ‘wounded sparrows of heaven’, the monks who live there. At the feet of the niptic/hesychast Elder Kallinikos (†1930) he found a teacher experienced in obedience and the prayer of the heart. There are no human consolations there. There’s no running water, the everyday meal featured dried out rusks, the timetable was exhausting and made them very tired, the location was a desert and the constant cutting off of one’s personal will was a bloodless sacrifice. He was tonsured a monk in 1924.

There are, however, some small and some great joys associated with prayer, obedience and the ascetic life. The Jesus prayer, the blessing of the Elder, and divine worship brought grace to his soul. He remained steadfast to the words he heard at his tonsure. He suffered patiently ‘every sorrow and worry of the solitary life, for the kingdom of God’, with the help and grace of our All-Good God. This very strict monastic life wasn’t for many people. Fr. Christodoulos was one of the very few who could live it. He reminds you of the ancient fathers of the desert in Nitria. 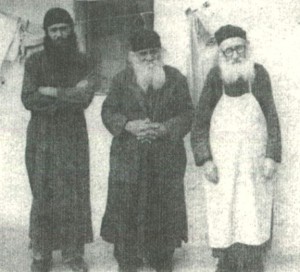 Elder Christodoulos (in the middle) with his disciples Kallinikos and Yerasimos

His Elder was very strict. He would send him to Karyes for a single letter, which meant a ten-hour walk, and he would return laden with supplies. Nor was he allowed to read much. ‘What’s the good of you reading if you’re not going to apply it?’ the Elder would say. Shortly after the demise of his Elder, God sent him an exceptional disciple, to whom he gave the name of his former Elder and this monk served him willingly and cheerfully until the end of his life. We actually knew both these blessed elders and to be honest, we didn’t know which one to admire most. Their few words were most beneficial to the soul, and they also taught through their silence.

Elder Christodoulos’ end was painful: his whole body was covered in sores from his illness and he suffered constant and dreadful pain, which he bore without complaint. He said: ‘Illnesses are a purgatory for our soul’. He asked forgiveness of his disciples for tiring them, and called them angels. He also called upon the mercy of our all-compassionate God. He asked that he might leave this life without his sickness being a burden on others. He really did believe what he said, and wasn’t just pretending to be humble. 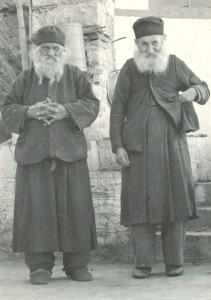 The blessed Elders Christodoulos and Kallinikos, at Katounakia

He lived in repentance and humility, contrition and compunction. He had remembrance of death, a sense of his sinfulness, glad sorrow, and joyful mourning. He used to teach, in restrained tones: ‘The prayer’s a good habit. Christ enters us, without our realizing. Don’t worry if your mind sometimes strays during prayer. Just carry on saying it, because God hears you and the demons are driven away… A monk is ‘a mind seeing God’. How can we reach this state? Through the simplicity of our life, and working at the prayer which is a sword against the devil…If you fast, take communion, read, and don’t have love, everything’s null and void, because God is love. Each of you imitate the good points of the other, and as for their weaknesses, pray that God will be merciful towards them…’.

This great ascetic of the twentieth century, this observer of the authentic monastic tradition, who loved the fathers, his brothers, his children and his fellow men, went to his rest on 23/4/1982. He tried hard to benefit others with Patristic words, and blessed examples, rather than strict penances and harsh words. He was strict enough to himself, but lenient towards others. He was a wonderful image of meekness and sanctity.