Now, let me tell you about Elder Konstantios Ayiopavlitis, who, because of his great veneration for the Most Holy Mother of God, was also found worthy to see her, in the following manner.

When he was a soldier, taking part in the Battle of Kilkis, he found himself surrounded by the enemy. In the face of this great danger, he called upon Our Lady to help him and promised to become a monk. By a miracle, Our Lady saved him from certain death. He was discharged, went home to Kefallonia and told his mother about Our Lady’s miracle and the vow he’d taken. Being a God-fearing woman, his mother urged him to fulfil it. And so, in September 1926, he left the world and its affairs and went to the Holy Mountain, to the Monastery of Saint Paul, where he became a monk. 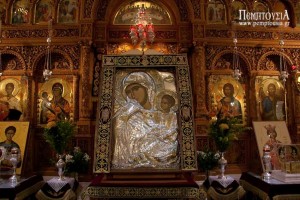 He had great veneration for the Mother of God, lived in obedience, with no thought of his past life and, you might say, in perfection. During the day he attended to his obedience and at night he prayed and read Patristic books. He had the gift of many tears from God, and whatever he read, he remembered completely.

There was no electricity back then, so he read by the light of a paraffin lamp. During the German Occupation, they didn’t have any proper paraffin at the Monastery and instead they used the stuff you put in engines. Naturally, they put coarse salt in to clean it, but still, Elder Konstantios’ eyes hurt from the long hours of reading and they were always watering.

He went to the then abbot of the Monastery, Papa-Serafeim and told him he wanted to go and see a doctor because his eyes hurt and were watering.  ‘A doctor?’, the abbot replied. ‘Don’t you know that Our Lady’s the doctor here?’ He didn’t say anything, took a blessing and left to get on with his obedience, which, at that time was looking after the vineyard next to the monastery, where there’s chapel to Saint Spyridon.

One day, he was digging in the vineyard and when it got dark he went into the chapel to read Compline. When he’d said the Salutations to the Mother of God, he knelt before her icon and made supplication to her, with tears in his eyes. He was exhausted, and, the next thing was, he’d fallen asleep. He saw, as if in a vision, a woman coming up from the sea, which isn’t far from the vineyard. She was wearing black and holding a beautiful little girl. It was none other than Saint Ann and the Most Holy Mother of God.

‘Why are you crying?’ the little girl asked him and he answered in his Kefallonian dialect: ‘Well, little lady, the thing is that my eyes hurt. I told the Abbot to send me to a doctor and he told me that the Mother of God would heal me, so I’m praying hard to her, with tears’.

The girl answered him very sweetly and gently: ‘Let me see where it hurts’. She put her most pure hands on both his eyes and at that very moment he awoke from the vision. Not only did his eyes not hurt, but he was able to see without glasses, as well.

By God’s grace, I actually knew him and lived with him for a few years. Even when he was very old, he could still read small writing without spectacles. He fell asleep in the Lord on 21 December, at the age of 95. I pray that we all have his blessing.

And I should also tell you about another monk who came to our Monastery of Saint Paul in May 1938. According to what the Fathers told us, he lived in great and profound devotion, innocence, simplicity and goodness. He was always willing and did as he was told tirelessly. His name was Elder Thomas.

His obedience was assistant baker. The baker at that time was a certain Elder Grigorios. It happened that he had to leave the Monastery for a short time, and the fathers ran out of bread. The Abbot told Elder Thomas to make up the dough and bake it.

The Elder was in a fix and didn’t know what to do. He knelt before the icon of the Mother of God which was in the bakery house and begged her: ‘Most Holy Lady, I don’t know what to do, how to make dough and bake it up. Please help me, because in you I hope and I pray to you’. Well, by a miracle he saw a woman standing next to him and she showed him how to make the sourdough starter, how to kneed and how to bake. Together they made some sweet-tasting and delicious bread.

The fathers knew nothing of the miracle and ate Our Lady’s bread. ‘What did you put into the bread to make it so sweet and tasty?’ they asked. When the Elder told them about the miracle, they gave glory to the Mother of God who looks after her children in wonderful ways and praised Elder Thomas, who’d been deemed worthy of seeing Our Lady here on this earth. 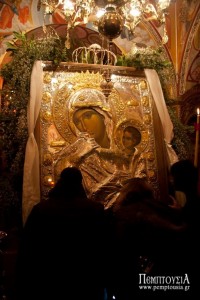 I’ll tell you another story about this holy Elder Thomas. One year, at Easter, the Second Resurrection service (Vespers on Easter Sunday) had just finished, when the Abbot told him to go to the cemetery and say ‘Christ has risen’ to the departed fathers. He thought nothing of it, took a blessing and, purely out of obedience, went to the ossuary. With great simplicity, he said to the bones: ‘Fathers, the Abbot’s sent me to say “Christ has risen” to you’. The bones then shook and one skull, raised a little higher the others, replied: ‘He has risen, indeed’.

Elder Thomas left and went to tell the Abbot what he’d seen and heard, and when it was made known to the other fathers, they glorified God that in our own day there are such monks and such miracles.

Elder Thomas departed this life in a blessed manner on 8 February 1949. May we all have his blessing.

And I’d like to tell you something else that has to do with Our Most Holy Lady.

In our Monastery, Saint Paul’s, there lived Elder Anthimos, who came to the Monastery in 1926. Because he was no longer a young man when he entered the monastic life, he displayed great devotion and tried his best to make up, in his new life, for all the time he’d wasted in the outside world. He was obedient, loved the services and was on very good terms with the other fathers. When he’d reached a ripe old age, he fell ill, and they took him from his cell to put him in the Monastery’s infirmary. The Abbot was away for a time and his duties were being carried out by my late Elder, Papa-Andreas, who often told us this story with tears in his eyes.

Papa-Andreas then lent on the metal bit of the bed and silently said the Salutations to the Mother of God. Elder Anthimos was in the condition I’ve described, but when the Elder reached ‘Hail Bride Unwedded” or ‘Alleluia’- and he wasn’t saying the prayers aloud- something wonderful happened which was unheard of for someone at death’s door: Elder Anthimos made the sign of the Cross and, when the Salutations ended, turned his head and departed for the heavens. I remember that, every time the late Papa-Andreas told me this story, he wept and said: ‘Son, that man wasn’t just for Paradise, but he had a place with the saints, as well’. He fell asleep in the Lord on 28 June, 1945. May we have his blessing.

Let me tell you one more amazing thing, then I’ll finish.

My elder, Papa-Andreas, told me about a certain monk who came to the Monastery in 1920. He lived the monastic life and strove to do well, as did the other fathers.

At one time he fell seriously ill and the then Infirmarer, went to the only young priest at the Monastery, Papa-Andreas, and said to him: “Father, Elder Grigorios isn’t well and wants communion’. Papa-Andreas went to the church straight away, put on a stole and took a piece of holy bread from the ciborium. After he’d placed it in the holy chalice, he made his way to the Elder Grigorios’ cell. By the time he got there, however, the latter’s condition had worsened, and when he gave him Holy Communion, he was unable to swallow. Papa-Andreas waited for some time, but nothing happened. He went back to Church, put away the holy chalice and then God enlightened him. He went to his cell, made some tea and then went back to Elder Grigorios and gave him little sips on a spoon. He didn’t even finish the tea before he’d managed to swallow the Holy Communion. Then something amazing and astonishing happened: Elder Grigorios opened his eyes, made the sign of the Cross and with tears in his eyes said to the young Papa-Andreas, as he then was: ‘Father, thank you for the good you’ve done me. God will pay you’. Then he turned his head and, like a little bird, flew off to heaven. Papa-Andreas said to me with tears in his eyes: ‘Do you see, son, how Our Lady doesn’t let any of her children out of her care?’ 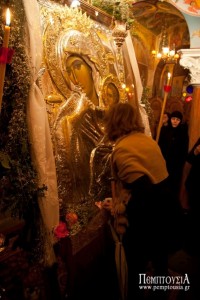 When he departed this life it was 3 December, 1935. May we have his blessing

That’s what I’ve got to say to you tonight and I pray with all my heart and soul that Our Lady will bless you, will bless your life, will bless the works of your hands, will grant you health and strength to finish the rest of the course of the fast and to deem all of us worthy, through the prayers of His Eminence your Metropolitan, to venerate the holy Resurrection of Christ.

Before His Eminence says the dismissal, may I ask you, when you’re saying your prayers, to say a ‘Lord have mercy’, for me, the least of His servants, so that He may have mercy on me and give me repentance. And may Our All Holy Lady, our sweet Mother, grant me a good end. Amen.