The Myrrh-bearing women were those who followed Christ and His Mother. They stayed with Him at the time of His saving Passion and anointed the Lord’s body with myrrh.

When Joseph and Nicodemus asked Pilate for the Lord’s body, they took it down from the Cross, wrapped it in a sheet and with choice spices laid it in the hewn-out tomb. They then rolled a large stone to cover the entrance to the tomb and Mary Magdalene and the other Mary sat opposite the tomb. The ‘other Mary’ certainly refers to the Mother of God. They weren’t alone, however, since Saint Luke mentions that that there were also other women there.

The Lord’s resurrection is the renewal of human nature, a reconstruction, and a return to the eternal life of the first Adam, who was devoured by death because of his sin, and who, through death, returned to the earth from which he was made. 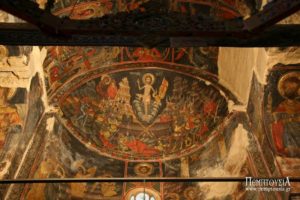 Just as, at the beginning, no-one saw a man being created, because there weren’t any people around to witness it, after he’d been given the breath of life through the inhalation of the divine Spirit, the first person to actually see him was a woman, because after him the first person was Eve. In the same way the Second Adam, Christ, after His Resurrection from the dead, wasn’t seen by anyone, because none of His own people were there. The soldiers guarding Him were so overcome by fear that they may as well have been dead. And then the first person to see Him after he rose was a woman.

There’s also something which the Evangelists have left rather in the dark, but which I’d like to reveal, if I may. In fact, it was only right and proper that of all people to see the Risen Lord and to enjoy talking to Him and clutching His pure feet it should be His Mother, though the Evangelists didn’t say so explicitly, so as not to arouse suspicion among unbelievers by naming her, because she was His mother. Since I’m now talking to believers, I’m able to make things clearer.

All the Evangelists mention that this took place on Sunday: ‘at early dawn’ towards the dawn’, early, while it was still dark’, very early… when the sun had risen’. So it was early and just getting light. The Evangelists differ about the precise time and also about the number of women who went.

There were lots of myrrh-bearers and they didn’t go to the tomb only once, but several times, in company, of course, but not always with the same women. They all went in the morning, then, but not all at the same time.

I would say and conclude that from all the Evangelists the first to go to the tomb of the Son of God, in the company of Mary Magdalene, was the Mother of God. I deduce this from Matthew: ‘Mary Magdalene and the other Mary [who was certainly the Mother of God] went to see the tomb. And behold, there was a great earthquake, for an angel of the Lord descended from heaven and came and rolled back the stone and sat on it. His appearance was like lightning, and his clothing white as snow. And for fear of him the guards trembled and became like dead men’. 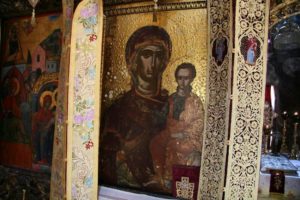 I think that it was for the Mother of God that the Life-bearing tomb was opened (because first through her everything in heaven and on earth’s been opened for us). For her the angel shone like lightning, so that she could see the empty tomb and the great miracle of the burial cloths without the Risen Lord. Clearly this angel who bore the Good News was Gabriel. He spoke of the Resurrection, showed the Myrrh-bearers the empty tomb and told them to inform the disciples. ‘So they departed quickly from the tomb with fear and great joy’.

I also believe that it was Mary Magdalene and the other women who were in fear, while the Mother of God was jubilant, because she understood the joyful message of the archangel, which she believed, and also the convincing events which had taken place: the earthquake, the stone being rolled away, the empty tomb, the burial cloths which were still tied but no longer held a body.

Finally, it was the Mother of God who first recognized the Risen Lord. She fell at His feet and became an apostle to the apostles, when Jesus appeared to the myrrh-bearers on their return and said: ‘Hail’.