Religion / Liturgy
Thomas Mavromoustakos, Professor of the Department of Chemistry at the National and Kapodistrian University of Athens

Wine and the Holy Scriptures: the books of the Bible, texts inspired by God are full of poetic hymns to the vine and its produce and contain numerous symbolic references to them. How can we forget Psalm 103, that wonderful hymn to God, the Maker of heaven and earth, Who gave us food brought forth from the earth, wine to gladden our heart, oil to make our face shine and bread to strengthen our heart (verse 15)?

In Genesis, the first book of the Old Testament, it mentions that, after the flood, Noah became a farmer. He began to cultivate the earth and, among other things, planted a vineyard. From the grapes he produced, he made wine. One day, he drank some and became inebriated. He didn’t realize he was drunk and took his clothes off, being at home at the time. His son, Ham, the ancestor of the Canaanites, saw his father naked and went outside to tell his brothers, Shem and Japheth. They immediately threw a garment over the naked body of their father, in such a way that they were spared the sight of him naked. When Noah came to himself, he realized what had happened and cursed Ham, saying that he would be a servant to his brothers. But he blessed his other two sons (Gen. 9, 20-2). From the very first book of the Bible, then, Holy Scripture makes mention of wine and its side-effects. 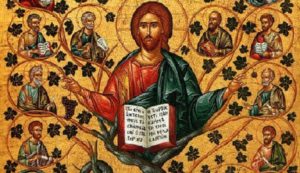 The following incident is reported in the book of Esdras and helps us understand the overwhelming power of wine. King Darius prepared a great feast. After his guest had eaten and drunk their fill, they left. His three bodyguards each wrote a note which they left on the king’s pillow, giving their opinion as to what the most powerful force in the world is. The king would reward the winner with great honour and gifts. The first of the three wrote that wine is the most powerful: ‘Gentlemen, how is it that wine is so superior? It misleads the minds of all who drink it.  It makes the mind of the king the same as that of the orphan, likewise of the slave and the free, of the poor and the rich.  It changes every thought to feasting and cheerfulness, and forgets all grief and every obligation.  It fattens all hearts, makes one remember neither kings nor administrators, and makes everyone talk in outrageous sums.  When drinking, people forget to be civil even with their friends and relatives, and after a while they draw their swords. When they recover from the wine, they don’t even remember what they did.  Gentlemen, isn’t wine superior, since it forces people to behave like this?’. The second chose the king and the third, the winner, elected women, though he did add that the truth overcomes everything else (Esdras 1, 3-4).

These three examples suffice to demonstrate the appreciation and the fear that the people of Israel had for the ‘fruit of the vine’. The aim of this article, however, is not merely to quote the uses and customs of the Jews which were associated with the vine and with wine, but to proceed deeper into the symbolism these represent. This symbolism sets great store on the value of the vineyard and its fruit. In the sacrament of the Divine Eucharist, for example, the vineyard (Jesus) is offered as wine (His blood) to the faithful (individual vines) for their sanctification