There’s no ‘spiritual life’, only life in Christ and in the Church.

The Church is Christ’s way of life. But we think of the Church as the Patriarch, the Archbishop, the Bishop and each priest. And at the same time we think of ourselves as being outside the Church, with the ability to judge everyone. It’s a lot easier this way. With this outlook, we don’t feel that we’re members of the body of the Church. This is a fundamental mistake. This is what it all starts from.

The teaching of the Church is that it is one body, the head of which is Christ and everyone else is a member and part of the same flock of Christ. Saint John Chrysostom says that the distinction between shepherds and sheep is one for people. For God, ‘all people are sheep’. Both the Patriarch and the little child who was baptized today, every grandfather and grandmother, and every young or old person. Everybody. The distinction between shepherds/sheep is only for us. So the body has Christ as its head and all the rest of us as its members. 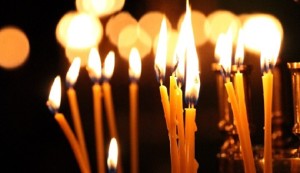 We were baptized at a time when we didn’t understand things. We became members of the Church unconsciously. At this moment in time, and let’s not be afraid to face up to things as they really are, the Church is going through a certain amount of confusion as to who its members really are. Why? In baptizing infants, it doesn’t know which direction they’re going to take thereafter. When did infant baptism start? From the time when the whole of society became Christian. But note this: it was a society of adults which became Christian. And when this society of adults became Christian, obviously their children also became Christian. But is today’s adult society Christian? Do adults know clearly who Christ is and what their relationship with the Church is? Let’s not fool ourselves. We baptize little children because of the hopes of the parents. Because the role of the godparent is now no more than a purely formal one, even if older generations respected them (I remember my late father, who was a priest, making me kiss the hand of my godmother). Does this mean that, in the old days, the Church was on the right path? I became a Christian and my neighbour saw that something had changed in my life. And because this change interested him, he said: ‘Something’s going on in his life. What’s happened?’ Then I would ask: ‘Are you a Christian?’ And he’d reply: ‘I’d like to be’. Then what happened? I’d take him by the hand to the Bishop and say: ‘I accept the responsibility of bringing this person into the Church’. I’d guarantee, in a manner of speaking, that someone would become a Christian [In languages other than English, the term for godparent is ‘sponsor’]. I accepted the responsibility for his or her future path. And by extension, I also undertook to instruct them in the faith, to some extent. Apart from the official catechism offered by the Church. Can you imagine? Patriarch Kyrillos of Jerusalem wrote massive catechisms. History relates that the church of the Resurrection, which could hold 3,000 people, was full of catechumens all year long, until the time came for them to be baptized. And for somebody to become a member of the Church, was a matter for the whole Church.

Now it’s a private matter. Parents decide to have their child baptized and the Church knows little about it. This is why we said earlier that the Church is experiencing the tragedy of not knowing who its members are and what their path in life has been since they were baptized. It may be that the kid grows up and doesn’t believe in anything. Not Christ, not the devil, to put it simply. But we’ve got it written down on our books that it’s been baptized, so it’s a Christian. And that’s when all the mix-ups and confusions begin.
‘I get baptized’ means I die to one way of life. That’s what we meant earlier. There’s no spiritual or unspiritual life. There’s only life with Christ and the Church and life without Christ and the Church.