What does it mean to belong to the Church?

This must be qualified at once: in the Apostolic community, i.e. in communion with the Twelve and their message. The Christian “community” was gathered and constituted by Jesus Himself “in the days of His flesh,” and it was given by Him at least a provisional constitution by the election and the appointment of the Twelve, to whom He gave the name (or rather the title) of His “messengers” or “ambassadors.” For a “sending forth” of the Twelve was not only a mission, but precisely a commission, for which they were invested with a “power” (Mark iii, 15; Matt, x, 1; Luke ix, 1). In any case as the appointed “witnesses” of the Lord (Luke xxiv, 48; Acts i, 8) the Twelve alone were entitled to secure the continuity both of the Christian message and of the community life. Therefore, communion with the Apostles was a basic note of the primitive “Church of God” in Jerusalem (Acts ii, 42).

Christianity means a “common life,” a life in common. Christians have to regard themselves as “brethren” (in fact this was one of their first names), as members of one corporation, closely linked together. And therefore charity had to be the first mark and the first proof as well as the token of this fellowship. We are entitled to say: Christianity is a community, a corporation, a fellowship, a brotherhood, a “society,” coetus fidelium’.

And then, even though the Church is visible, in the sense that it embraces all the Orthodox Christians living in the world, it’s also invisible, since it includes all those who’ve departed this world in faith and sanctity and are now in heaven. So the Church lives and exists both in heaven and on earth and, in one aspect, the heavenly, the ‘Church triumphant’ as it’s known, is invisible, whereas, as the ‘Church militant’ it’s an earthly, visible and historical community. But, whether on the earth as militant or in heaven as triumphant, the Church is a communion of saints. 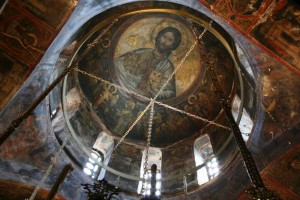 So on the one hand the Church is a divine, spiritual, invisible and eternal institution, but on the other it’s a historical community of people which can be described, experienced and seen. Yes, the Church is invisible, because its Head, the Lord, is invisible, as is the Holy Spirit Who resides within it. Also invisible is the indwelling divine Grace, which justifies and sanctifies and saves. The Church also has its invisible part in heaven and so the mystical Body of Christ is made up of both the heavenly and earthly parts. This is why the Church is a spiritual entity for its one divine Head and for the one Holy Spirit Who guides it in the way to all truth. But it’s also, and at the same time, the visible and tangible Church Militant on earth, working for our salvation. It transmits Divine Grace through our senses, it has worship and external organization (in which God and people act and interact), leaders and led, that is the pastoral hierarchy of bishops and the flock of the faithful, all the devout and impious, indiscriminately, the pure and the sinners. (Σύνοψις τῆς Δογματικῆς… p. 81).

Saint Paul says of Jesus Christ that God the Father: ‘And he put all things under his feet and gave him as head over all things to the church, which is his body, the fullness of him who fills all in all’ (Eph.  1, 22-3).

The same Apostle says to the Shepherds of the Church: ‘Pay careful attention to yourselves and to all the flock, in which the Holy Spirit has made you overseers, to care for the church of God, which he obtained with his own blood’. (Acts 20, 28).