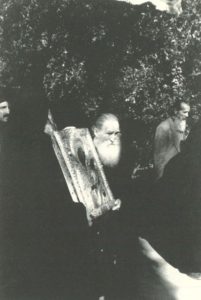 Emmanouïl Fotios Passalis, this kind, very simple, very humble man of God, was born in the village of Maritsa, Rhodes in 1926. While he was in the world [i.e. before he went to Athos], his spiritual father was the late Amfilohios Makris (†1970). He came to the Holy Mountain and went first to the skete of Kavsokalyvia, to the Elders Mihaïl (†1979) and Ierotheos (†1968). He came to the Monastery of the Great Lavra in 1957 and was tonsured a monk in 1958. He had great reverence for the founder of the Monastery, Saint Athanasios the Athonite. He was a willing and conscientious servant of the monastery of his repentance, as verger, sacristan, reader and monk in charge of the monastery’s konaki [Turkish konak, ‘residence’] in Karyes.

He was inordinately fond of the church, the Mother of God, the saints and the divine services. He loved order, neatness, the rule and tradition. This is why he’d always have some small complaint about any divergences or omissions. He was a pleasant man, well-liked for his kindness and simplicity. His words were unembellished, humble and charming. He was diligent, hard-working and a lover of services, goodness and virtue. He owned nothing, was merciful, likable and always genial. He was close to and inspired by Elder Avvakoum (†1978), a great faster and barefoot ascetic, who, like Fr. Efraim, came from Rhodes. 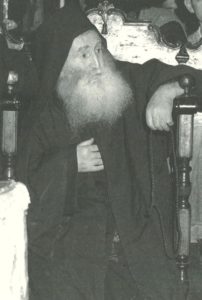 One time, in 1993, he spoke and I wrote the following: Our Most Holy Lady the Mother of God and Ever-Virgin Mary, our Helper. I want to say something about the life of the older fathers and monks who lived on the Holy Mountain. When I first came to the Holy Mountain, in 1956, the place really was the way it was described by Agapios from Crete, who was a monk at Little Saint Ann’s, in his book Αμαρτωλών σωτηρία [The Salvation of Sinners]. You’d see the monks passing along those ancient paths with the pack animals. If you started from the Lavra, six hours by mule would see you at the konaki and you would say the Salutations and the Paraclitic Canon on the way and leave bread and cheese at the spring of holy water for the pilgrims to eat. The representatives stayed in the konaki all the time, with a monk to look after the residence and another to do the cooking and together they tended the garden. At Christmas and Easter, they’d go to the monastery by mule, leaving the other two monks behind. When I came to the Holy Mountain, I found four abbots who were holy men: Gavrïil at Dionysiou, Haralambos at Simonopetra, Sofronios at Koutloumousiou and Evdokimos at Xenofontos, all men of God and experienced in directing large monasteries, both materially and spiritually. As an idiorrhythmic monastery the Lavra had Elder Amvrosios, who, as a true man of God was held to be the abbot by the senior monks of the monastery. These senior monks or ‘supervisors’ were elderly and well-educated. You’d see Pavlos Pavlidis, the doctor, and Elder Onoufrios, who’d studied at the Athoniada School. At the New Year, Elder Amvrosios would decide on the obediences for that year. First they’d gather and elect the committee members. The bells would ring majestically, and the next day they’d tell everyone what their obedience was. The typikarios, responsible for the order of services, was always a man of lengthy experience, such as Elder Andreas, Elder Grigorios or Elder Theofilos. Then came the canonarch and the vergers, old monks with experience, as were the late Gideon and Petros. Then came the reader. The late Father Koukouzelis led the choirs in all the eight tones. 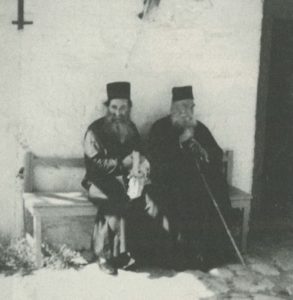 The Lavriote Fathers Efraim (left) and Avvakoum, both from Rhodes.

The ordinary fathers lived simply and plainly in the common wing, on the south side of the Lavra, which was from the time of Saint Athanasios. They were poorly dressed, with patched habits, clothes and shoes. They’d see each other in the narrow corridors and gather in the winter in the big room where they had a stove and they could dry their clothes, and where there was a tap they could all drink water from. In their cells they had only a lamp, their bed, a wood-stove and their religious books. They were poor and served at all the obediences. They respected the superiors, who were dressed magnificently, like abbots or bishops, though they were also full of devotion and the fear of God. They lived in the simple cells and Elder Theofilos and Elder Avvakoum were ascetic hermits who were without possessions or financial resources.

This is how the blessed Elder Efraim lived. He fell asleep in the Lord on 25 June 1999.