The novice who is studying the Jesus Prayer will advance greatly by observing a daily rule comprising a certain number of full prostrations and bows from the waist, depending upon the strength of each individual. These are all to be performed without any hurry, with a repentant feeling in the soul and with the Jesus Prayer on the lips during each prostration. 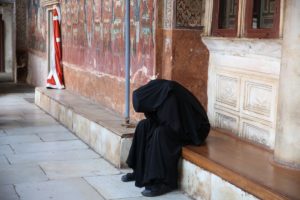 An example of such prayer may be seen in the “Homily on Faith” by St. Symeon the New Theologian. Describing the daily evening prayers of the blessed youth George, St. Symeon says: “He imagined that he was standing before the Lord Himself and prostrating himself before His holy feet, and he tearfully implored the Lord to have mercy upon him. While praying, he stood motionless like a pillar and bade his feet and the other parts of his body to stay still, especially the eyes, which were restrained from moving curiously in all directions. He stood with great fear and trepidation and denied himself sleep, despondency and laziness.” Twelve prostrations suffice in the beginning. Depending upon one’s strength, ability and circumstances, that number can be constantly increased. But when the number of prostrations increases, one should be careful to preserve the quality of one’s prayer, so that one not be carried away by a preoccupation with the physical into fruitless, and even harmful, quantity. The bows warm up the body and somewhat exhaust it, and this condition facilitates attention and compunction. But let us be watchful, very watchful, lest the state pass into a bodily preoccupation which is foreign to spiritual sentiments and recalls our fallen nature! Quantity, useful as it is when accompanied by the proper frame of mind and the proper objective, can be just as harmful when it leads to a preoccupation with the physical. The latter is recognized by its fruits which also distinguish it from spiritual ardor. The fruits of physical preoccupation are conceit, self-assurance, intellectual arrogance: in a word, pride in its various forms, all of which are easy prey to spiritual deception. The fruits of spiritual ardor are repentance, humility, weeping and tears. The rule of prostrations is best observed before going to sleep: then, after the cares of the day have passed, it can be practiced longer and with greater concentration. But in the morning and during the day it is also useful, especially for the young’ to practice prostrations moderately—from twelve to twenty bows. Prostrations stimulate a prayerful state of the mind and mortify the body as well as support and strengthen fervor in prayer.

These suggestions are, I believe, sufficient for the beginner who is eager to acquire the Jesus Prayer. “Prayer,” said the divine St. Meletius the Confessor, “needs no teacher. It requires diligence, effort and personal ardor, and then God will be its teacher.” The Holy Fathers, who have written many works on prayer in order to impart correct notions and faithful guidance to those desiring to practice it, propose and decree that one must engage in it actively in order to gain experiential knowledge, without which verbal instruction, though derived from experience, is dead, opaque, incomprehensible and totally inadequate. Conversely, he who is carefully practicing prayer and who is already advanced in it, should refer often to the writings of the Holy Fathers about prayer in order to check and properly direct himself, remembering that even the great Paul, though possessing the highest of all testimonies for his Gospel—that of the Holy Spirit—nevertheless went to Jerusalem where he communicated to the apostles who had gathered there the Gospel that he preached to the gentiles, “lest by any means,” as he said, “I should run, or had run, in vain ” (Gal. 2:2).