A unique masterpiece, an icon of the Ascension of Christ by the great Russian iconographer Andrey Rublyov has arrived in Athens from the Tretyakov Gallery in Moscow and will be displayed in the Byzantine and Christian Museum of Athens from June to September, 2016. 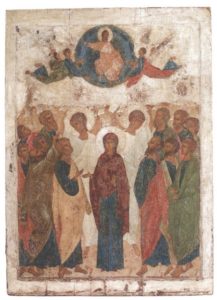 The Ascension of Christ by Andrey Rublyov

The icon of the Ascension of Christ is one of the five works by Rublyov which have survived. It was sent to Athens as a foretaste of the exhibitions which will be staged at the Byzantine and Christian Museum in collaboration with the Tretyakov Gallery and the Hermitage Museum of Saint Petersburg, within the context of ‘2016, Year of Russia and Greece’.

It’s worth noting that only a few days ago, President Vladimir Putin of Russia visited the Byzantine and Christian Museum and inaugurated the events of the Year of Russia and Greece. Referring to Rublyov, he stated that he drew his inspiration from the religious and cultural tradition of Byzantium, though he also created a ‘Russian style’. Among other things, the Russian president pointed out that ‘For a long time, his name was known only to specialists and it was not until the 20th century that his works became known to the public at large’,

Andrey Rublyov is a symbol for Russian Orthodox art. Today he’s considered one of the leading Orthodox iconographers, whose work is clearly influenced by Theofanis the Greek.

The film ‘Andrey Rublyov’, by the great Russian director Andrey Tarkovsky is also well known. Here is an extract from an interview with Laurence Cossé (1991), included in the book Andrey Tarkovsky, a Guide to his Work, by Antoine de Baecque.

‘Andrey Rublyov is a film about the legitimacy of art in a world plagued by evil. Why do you create beauty, when there’s incessant evil in the world?

The more evil there is in the world, the more reasons there are for you to create something beautiful. It’s more difficult, without doubt, but it’s also more necessary. Provided we understand that it’s not necessarily art.

What does that mean ‘that it’s not necessarily art’?

As long as there are people, there’ll always be an instinct towards creativity. As long as people feel that they’re people, they’ll try to create something. This is where the link to the Creator lies. What’s creation? What use is art? The answer to this is the adage: ‘Art is prayer’. That says it all. Through art, people express their hope. Anything that doesn’t express that hope, if people don’t have a spiritual foundation, then it has nothing to do with art. At best, what they produce would be a wonderful intellectual analysis. For instance, the whole oeuvre of Picasso’s is based on this intellectual analysis. Picasso painted the world in the name of his analysis, of his intellectual construct and, despite the prestige of his name, I have to confess that it never got close to art.

Isn’t there any art other than that which demands that the world must have a meaning?

I repeat, art is a form of prayer. People live through their prayers.