The danger of an ideological Christianity

In this way, hospitality avoids the danger, the anomaly of favouritism and shows it to be a veritable sea of compassion. If you love your brother, you love the stranger. In any case, as Saint Basil the Great notes: «there is one nature, both this person and that are people. There is one poverty, one penury for both of them. Give to your brother and to the stranger. Do not turn away from your brother, but also make your foreign brother familiar. You should see straight. Do not prefer your friend over the stranger when it comes to dealing with their poverty… We are all related, all brothers, children of the same Father. If you look for your spiritual father, He is in the heavens; If you are looking for earthly things, the earth is your mother and all of us have been fashioned from the same clay. So nature according to the flesh is our sister as is birth in the spirit. Other people bear the same blood that was given to you from the first human person. They have the same Grace from the Lord which was given to you. See straight, then, so that you may be spared»[20]. 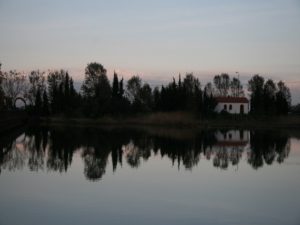 And if your offering to your brother and the stranger (give to the stranger), who knocks at your door is a corrective for an anomaly in your vision, this correction, this removal of an «aesthetic» anomaly is the total embracing of the stranger. Where «give to the stranger» is radically transformed into «give me this stranger». Where the person of love «begs», in love, on the model of Joseph, to be given the opportunity, the joy, the gift to provide a welcome for the person, the stranger, Christ Himself[21], Who has ‘nowhere to lay his head’[22]. At this point I ought to stress that communion, or relationship, is not a reality that requires the engagement of only one of the participants.  In fact, it is an act of sharing, in which each or many submit their existence with respect and understanding for the existing differentiation in the service of the Eucharistic table of love, in the functioning of the gradual revelation of the celebration of a communality in the making.

For some, of course, the Church is restricted to ritual actions, to some sort of consummation. Or to institutional activities which are, at the same time removed from the truth of real life. What their vision lacks is the liturgy before the liturgy, as well as the liturgy after the liturgy. We therefore often find ourselves faced with concepts and ways of thinking of purity, which introduce a kind of ‘Orthodox idolatry’ and ‘spirituality’ where it is impossible to identify God with the world and with people.  In any case, how can He be identified with the profane and the inferior?

And if, of course, this is the sickness of ecstatic, idealistic and, in the end, ideological Christianity, which ignores history, nature and even people themselves, then at the opposite pole we often encounter the sickness of sterile activism, which may at times be ascetic, and which ignores the sacramental dimension of the Church and identifies indiscriminately with whatever satisfies people’s psychological sense of propriety.

In each case, the Other is entirely absent. Whether we recognize this or not is irrelevant. I say this because it is clear that ecstatic Christianity without its historical and natural flesh ignores its neighbour. The same is true, however, of active Christianity, when the Other is not a point of contact, the point at which you and I and we attend church, but the locus where the selfish contributions of the benefactor, the saviour, can be made manifest, together with their superiority in the field of charitable works.

And if the above appears to be all in the mind, distant, maybe even fantastical, let us allow Elder Porfyrios, this pearl of the Church today, to speak the word of truth, the Gospel hidden away in life: that love is above all things and in all things.

[21] It is beyond doubt that communion with a stranger is communion with Christ. The incarnation of such a truth, such a pattern of behaviour in the land of our popular tradition is demonstrated in a most powerful way by Mikis Theodorakis, who set to music a poem by Tasos Leivaditis, I open the door at night: I open the door at night/ I hold the lamp up high/so that those sorrowing on the earth can see it and come and find company… so that that Christ will come as well’.