Religion / Holy and Great Synod
George Mantzarides, Professor Emeritus of the Theological School of the Aristotle University of Thessaloniki

The experience of tranquility

On the occasion of the convocation of the Holy and Great Synod of the Orthodox Church, we are publishing a text by George Mantzaridis, Emeritus Professor of Theology at the Aristotle University of Thessaloniki, which deals with the manner in which Orthodox Theology is produced. This text is a contribution to the more general dialogue which is preceding the discussions of the Pan-Orthodox Synod.

The experience of tranquility of course requires external peace. It cannot be achieved in the turmoil and noise of modern life, even though there are always a few bright exceptions who manage to achieve the unachievable. Tranquillity is a state of the soul, or, more accurately, of the intellect. When our intellect stops expending itself on external things and ceases to be imbued by the stimuli of this world, it comes back to itself and, through itself, ‘ascends to understanding of God’ [8]. Tranquillity is experienced first and foremost in the desert, and all the great hesychasts passed through the desert. 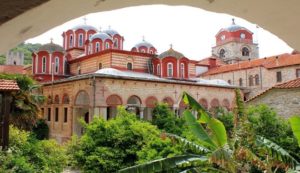 As regards the approach to God and knowledge of Him, what is usually mentioned is the verse from the Psalms ‘Be still and know that I am God’ [9]. This verse is often taken as meaning external tranquillity, however. In other words, stillness is considered no more than abstention from work or outward tranquillity. But such a stillness, such tranquillity does not have any positive content, nor, of course, does it offer any knowledge of God. ‘For knowledge of God is not given by tranquillity from the outside… but rather tranquillity occurs in those who have struggled legitimately and well’ [10]. If people withdraw from action, that is the observance of the commandments, without investing in spiritual labour, they are lazy on both counts and so are certainly sinning [11].

Knowledge of God does not come as the result of external tranquility, useful though this may be in its acquisition. Nor is hesychasm restricted to external tranquillity. The tranquillity of Orthodox hesychasm is not theoretical, but an excessively empirical state. It presupposes the observance of the commandments and the cultivation of the virtues. When ascetics mature in the ‘stadium’, in ‘action’ when, in other words, they’ve already striven ‘legitimately and well’ in the pursuit of the virtues, then they are able to turn towards contemplation. And the delight in this divine contemplation is real tranquillity, the tranquillity of the mind.

In presenting these two forms of the ascetic life, Saint Gregory the Theologian writes that both these forms of the ascetic life are good and beloved and people are called upon to follow the form which suits them best. Action is for most people, while contemplation is for the perfect [12]. Saint Gregory himself preferred contemplation. He was brought to this preference not so much through his own psychological make-up but rather by the divine love ‘of the good and of tranquillity’ with which he was imbued [13].

It appears that Saint Gregory’s close friend, Saint Basil the Great, preferred action. This is what he placed as the basis of the monastic life which he founded. It has been claimed, in fact, that he excluded the life of a hermit completely, as being irreconcilable to our social nature and that probably only towards the end of his life did he reluctantly accept hermits as exceptions. This view is really rather simplistic. Appearances often deceive. Basil the Great experienced tranquillity intensely and noted its importance for the spiritual life. It was also the sound foundation for his unequalled pastoral and social work. How else are we to interpret his answers to the eparch Modestos, or his utter poverty after he had distributed all the worldly goods he had inherited from his parents?

Basil notes that, if our mind is distracted, ‘we cannot attain to either love of God or of our neighbour’ [14]. The insistence with which he highlights the exhortation in Deuteronomy to ‘look to yourself’ [15] is typical of what he has to say. In one homily with this Biblical saying as his theme, he comments: ‘Look to yourself, then; that is, neither to your family nor to those around you but to yourself alone’. [16].

Tranquillity is not merely the concomitant of action, but is actually a precondition for its proper exercise. Any proper action is the fruit of tranquillity. Precise observance of the double command of love assumes the unification of the fractured human persona, an ordering of the mind, and tranquillity of the intellect. Basil did not encourage the establishment of centres of hermits, which would have been easy, given the number of semi-eremitic communities which the faithful had already set up in his day. He did not do so because he himself had already lived and matured in tranquillity, and had been granted the vision of God, as he reveals in a letter [17].

Basil the Great preferred the coenobitic monastery because he wished the avoid the great danger of division and complacency which an unordered life alone would imply for many people [18]. But in order to set the monastery on a sound basis and to keep open its hesychast, charismatic perspective, he also set renunciation as a condition, which he emphasized and defined as ‘the transfer of the human heart to the heavenly realm’ [19]. This perspective of the monastic institution and of the Christian life in general was later developed by Basil’s actual and also spiritual brother, Saint Gregory of Nyssa, in his wonderful spiritual and hesychast writings.