The Holy and Great Council concludes its work

The Holy and Great Council held its concluding session on the 25th of June 2016, at the Orthodox Academy of Crete.  The work of the Council had commenced with the Patriarchal Concelebration on the Sunday of Pentecost, the 19th of June 2016, when the Divine Liturgy was presided over by His All-Holiness Ecumenical Patriarch, in Concelebration with the Primates of the Local Orthodox Autocephalous Churches, who were present, in the Cathedral of St. Minas in Heraklion, Crete.

During the sessions of the Holy and Great Council, His All-Holiness Ecumenical Patriarch Bartholomew expressed his joy, for the willing and positive response of the Local Autocephalous Orthodox Churches in attendance.  At the same time, he underlined the immense efforts, over many years, by all Autocephalous Churches in preparation of the topics on the Council’s agenda. 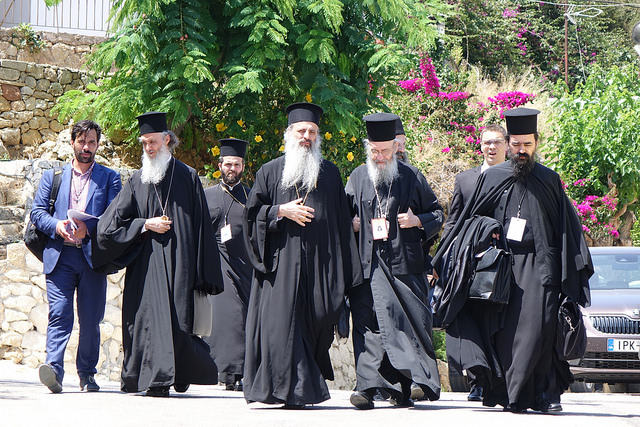 The Primates of Local Orthodox Autocephalous Churches who participated in the Holy and Great Council, stressed the importance as well as the historical significance of the convocation of this Council.  They also expressed their confidence that the Council opens a new era of conciliarity, for the Orthodox Church to express its positions on the contemporary problems of man in the world.

The sessions of the Council were not attended by the delegations of the Holy Orthodox Churches of Antioch, Russia, Bulgaria, and Georgia.

The Greek state headed by the President of the Hellenic Republic Mr. Prokopis Pavlopoulos, and the Greek government honored the Holy and Great Council in many ways and facilitated its work.

The work of the Holy and Great Council was officially concluded today, June 26th 2016, Sunday of All Saints, with the Patriarchal Concelebration.  The Divine Liturgy was presided over by His All-Holiness Ecumenical Patriarch Bartholomew, in Concelebration with the Primates of the Local Autocephalous Orthodox Churches, at the Holy Church of Saints Peter and Paul, in Chania, Crete.

Ηis All-Holiness Ecumenical Patriarch Bartholomew mentioned in his Homily that we should understand the Church as “substantially Synodical,” and the whole life of the Church as “life in Synod,” adding that the Synodical Decisions of the Holy and Great Council should be introduced in the life of the local Orthodox Churches.

His All-Holiness added that conciliarity is another word that characterizes the unity, holiness, catholicity and apostolicity of the Church, referring to its Eucharistic and eschatological identity and consciousness.

“If, as has been fittingly said, the 21st century could and ought to prove to be, the ‘century of Orthodoxy,’ then the Holy and Great Council of our Most Holy Church, by the grace of God who is worshipped in Trinity and is Lord of All, has laid the foundation stone for the realization of this God-pleasing vision.”