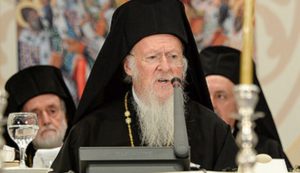 Your Eminence, Archbishop Irenaios of Crete and Your Eminences and Graces holy brother concelebrants, members of the Holy Eparchial Synod of the beloved Orthodox Church of Crete of the Ecumenical Patriarchate,

Your Excellency, the Regional Governor of Crete,

Most honorable Mayor of Heraklion, and other representatives of local and regional authorities of the island of Crete, the land of saints and heroes,

The Grace of the Triune God condescended to allow us to experience once more the communion of mutual love, unity and cooperation between Constantinople and Crete, between the Mother Church and Her beloved daughter, which is in full attendance, and the Orthodox Church by the presence of the Primates of the Churches and their delegations.

This current year 2016 has already been marked in history as a landmark of Pan-Orthodox theological experience and thought, as a most important page in the journey to the future of Ecumenical Orthodoxy. This is so because the Holy and Great Council of the Orthodox Church is convened to confirm and strengthen the unity of the faithful flocks, to proclaim the uniqueness of the One, Holy, Catholic and Apostolic Church, and to offer the witness of Orthodoxy to the contemporary world.

On this page, at the agreement of the Primates of the Orthodox Churches, the Church of Crete received by the Ecumenical Patriarchate the high and unique privilege, but also the great and at the same time precious responsibility to organize the Holy and Great Council at the Orthodox Academy of Crete.

As far as we are in a position to know, the details of the entire program have been organized in the best possible way with particular attention and care. On account of this, we owe thanksgiving and praise to Your Eminence, brother Irenaios, the members of the Holy Eparchial Synod of the Church of Crete and also to the appointed Organizational Committee for taking care of everything that is needed for the seamless fulfillment of this task of immense responsibility of our Modesty and the entire Pan-Orthodox Delegation, with such prudence and within a short time. 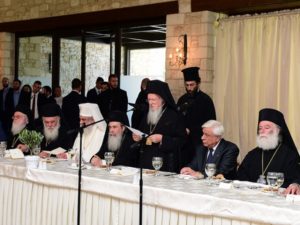 The centuries-long history and witness of the Church of Crete confirms the high level of spiritual life of the pious Cretan people, which characterizes the local tradition in its entirety. Moreover, the religiosity and traditional piety of Cretans is widely known both within the geographic boundaries of the Greek State and beyond them. The monastic tradition and the great number of historic Holy Monasteries in which young monks and nuns live, many of which hold degrees from Schools of Theology and other Universities, is undeniably proof of this timeless reality among other things. The Monasteries of Crete constitute true spiritual hives of the Orthodox ascetic witness and life in the world and outside of the world, in an ecumenical, timeless sphere that unites heaven and earth and leads to the royal city of Grace and vindication and glory into which nothing unclean shall enter, but only those who are written in the Lamb’s book of life (Rev. 21:27).

The long monastic tradition of the Great Island of Crete, in conjunction with the numerous adventures of the Orthodox peoples, as well as the Hellenes in particular, is associated with persecutions, martyrdoms and extensive suppressions of the faithful during its occupation by foreign aggressors, from the first Christian centuries all the way through the twentieth century. The martyrologies and biographies are replete with holy saints and martyrs. Saint Andrew of Crete, who originated from Constantinople, holds a prominent position among them. Therefore, Saint-bearing Crete occupies a prominent place within the Orthodox Church. It is particularly important that each locale, city or even small village of Crete has one or more local patrons and martyrs that the Orthodox Cretan tradition honors devoutly year after year according to local customs.

Your Eminences and Graces, brother Hierarchs in Crete, you minister in a hallowed, martyric and sensitive place and also to a blessed, saint-loving and heroic Orthodox flock. The Church of Crete stands today at a particularly high level with respect to the staffing of Her Holy Metropolises. The education, morale, vigor and outspokenness of Her Hierarchs and clergy in general are far beyond any compromises or agendas, and are apparent in all the facets of the spiritual life of the land. Crete truly is adorned with Hierarchs and clergy of high theological and pastoral presence.

Your Eminence, Archbishop Irenaios of Crete, President of the Holy Eparchial Synod of the Church of Crete and Your Eminences and Graces and venerable members thereof,

Before such a living Church, it is not only the Most-Holy Apostolic and Patriarchal Ecumenical Throne and Her, by God’s mercy, Primate that rejoices and boasts, but also our entire Holy Orthodox Church that is present in this brotherly gathering by way of Her holy representatives. Our Holy Orthodox Church blesses and congratulates all of you by raising this cup that is filled with the fruit of the vine from Crete, and wishes wholeheartedly to each one of you brothers health and length of days for the glory of the Triune God and for the good of this Church, which boasts saints, martyrs and heroes. And we urge this Church to continue Her ministry to the world inspired by the blood of Her holy martyrs and heroes, which was shed on this land and shamed the tyrants who persecuted and fought our Orthodox Church.

So then, brethren, stand firm and hold to the traditions, which you were taught by us, either by word of mouth or by letter. Now may our Lord Jesus Christ himself and God our Father, who loved us and gave us eternal comfort … comfort your hearts and establish them in every good work and word (2 Thes. 2:15-17). Amen.