We need preparation for the Holy Communion

Some people take the Body of the Lord without the fear of God. And they eat it. But they aren’t filled. Because as long as they take the sacrament only through the mouth, they’ll never be filled with its grace. From that point of view, they’ll still be hungry. Since, even before they come they felt full.

If they take Holy Communion while they’re still in love with their sins, it doesn’t bring them the fruit of salvation.

People aren’t satisfied with Holy Communion unless they really hunger for it. Unless they’re hungry. Those who’ve realized through their bad habits, that sin is poverty and hunger. These are the people who take the full energy and grace and efficacy. 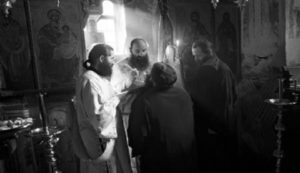 Not even the so-called elect are exempt from this rule. Because it’s not possible even for them (the so-called elect) to be without sin, since they will certainly commit something of a sinful nature unless they force themselves, every day, to avoid even those minor transgressions with which our backsliding human nature will forever be sullied.

When people aren’t careful to conquer their imperfections every day, then, however much they imagine that the transgressions they commit are really not so serious, their souls gradually fill up with sins. Then they lose the fruit of that inner state which we call spiritual riches, because it fills us with spiritual joy.

Saint Paul reminds us that we must avoid these sins. He says: ‘Examine yourselves, and only then eat of the bread and drink of the cup’ (1 Cor. 11, 28).

What does it mean that we have first to examine ourselves? What else if not that each of us can come to the Lord’s table only when we’ve first been set to rights and cleansed.

And so that those who are ‘satisfied’ might hear as well, he adds: ‘For all who eat and drink without discerning the body, eat and drink judgement against themselves (1 Cor. 11, 29).

We sin every day. Let’s hasten every day to the tears of repentance, which are the only medicine that makes us worthy to remove from our soul all those things with which sin has loaded it.