“You have Ascended in Glory, Christ our God” 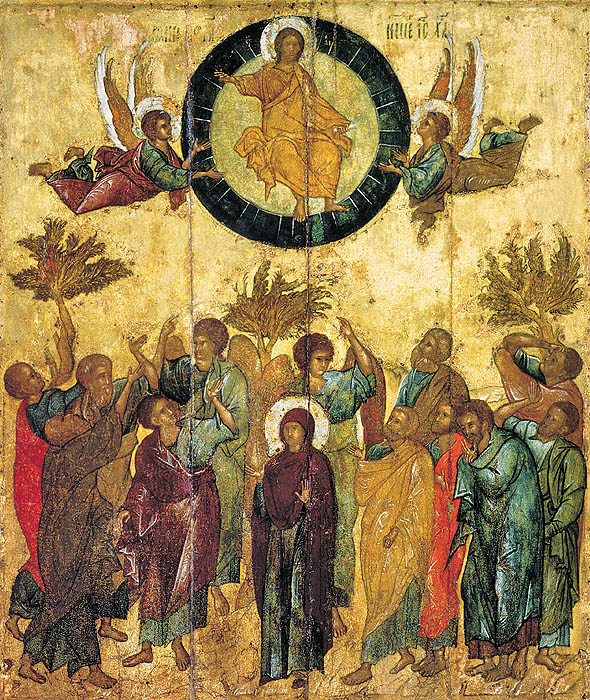 The Feast of the Ascension of Our Lord and God, Jesus Christ, is a joyful festal stage in the truly jubilant Resurrection time of our Church. With feelings of rejoicing, we Orthodox faithful pack the churches on this holy day, to send hymns of thanksgiving to  our Saviour and Redeemer Lord and to praise His holy ascent to the heavens, after He had consented to descend in order to perform his redemptive work for the human race. (Jn. 3, 13; Phil. 2, 6-11). We hymn His return to the divine throne of His ineffable majesty, at the right hand of God the Father, to Whom He is forever our great and eternal Intercessor (I Tim. 2, 5).

After His effulgent resurrection from the dead, Our Lord Jesus Christ did not leave the world immediately, but continued for forty days to appear to His disciples (Acts 1, 3). These post-resurrection appearances were of very great importance. The formerly terrified disciples had to experience the fact of the resurrection of their Master and to cast off all hesitation and shadow of doubt towards Him. They had to abandon every trace of the mistaken, narrow, Jewish concept of the Messiah. They had to realize fully that the redemptive task of the Saviour was for all humanity and forget any thought of the “resurrection of the royal throne of David” and world domination. His wonderful post-resurrection appearances and the now spiritually advanced nature of His exhortations were an important factor in the formation of the new concept of the divine Person of Christ the Redeemer and the missionary work of salvation which He had assigned to them: “He opened their minds so they could understand the Scriptures, and said to them: “Thus it is written, that the Christ should suffer and on the third day rise from the dead, and that repentance and forgiveness of sins should be proclaimed in his name to all nations, beginning from Jerusalem. You are witnesses of these things. And behold, I am sending the promise of my Father upon you” (Luke 24, 45-9). His most hopeful message to them was: “Behold I am with you always, until the end of time” (Matth. 28, 20) and “Stay in the city of Jerusalem until you are clothed with power from on high.” (Luke 24, 49), foretelling the investiture of the Holy Spirit on them and His Church.

And so, on the fortieth day, according to the Gospel of Saint Luke, “He led them out as far as Bethany, and lifting up his hands he blessed them. While he was blessing them, he parted from them and was carried up into heaven. And they bowed down to him and returned to Jerusalem with great joy, and were continually in the temple, praising and blessing God” (Luke 24, 50-3). Saint Mark the Evangelist, describing in fewer words this wonderful and moving event, reports that immediately after the explicit commissioning of the disciples to go out into the whole world, preaching and baptizing the Gentiles: “He was received up into heaven, and sat on the right hand of God. And they went out and preached everywhere, while the Lord worked with them and confirmed the message by accompanying signs (Mark, 16, 19-20).

The great event of the Divine Ascension really does have enormous  theological and redemptive implications for our Church. The Ascension of our Lord Jesus Christ is unquestionably the triumphal conclusion of His presence on earth and His work of salvation. “He ascended in glory” to confirm His divine capacity to the disciples who were present. To sustain them further in the titanic task He Himself had set them, that is His work of salvation for the human race.

Now it is true that, at that wonderful moment, the apostles had no clear awareness of their mission. Although they had experienced shattering events in recent times, the spotless sufferings of their Master and His dazzling resurrection from the dead, they were still unable to free themselves from the narrow, nationalistic, Jewish concept of the Messiah. This is why they fell into the temptation of asking Him, at the moment when He was leaving them for the heavens: “Lord, will you at this time restore the kingdom to Israel?” (Acts, 1, 6). They had not realized the universality of Jesus’ teaching, they did not understand the spiritual, world-wide revolution which He had come to bring to humanity, free of all forms of secular authority, with the exclusive nature of service towards the fallen. It would appear that they had forgotten their teacher’s exhortation to change their mentality and not think like those in authority: “But not so with you, but the greatest among you should become as the youngest and the leader as the servant. For who is greater: the person at the table, or the one serving? Is it not the one at the table? Yet I am with you as a servant. And you are those who have stood by me in my temptations” (Luke 22, 26-8). Christ Himself, Who came into the world “not to be served but to serve” (Mark, 10, 45) often  gave the example of serving. He told them, with words of gentleness, affection and love, that: “It is not for you to know the times or seasons that the Father has set by His own authority” (Acts 1, 7), intending to imbue in them an understanding of the abiding and saving presence of His Church in the world. What they needed was power from above and enlightenment so that they could be initiated fully into the mystery of the world’s salvation. He gave them the message of hope that they would receive “power when the Holy Spirit has come” and would thus be able to become “witnesses [to Him] in Jerusalem, in the whole of Judea and Samaria and to the ends of the earth” (Acts 1, 8).

The holy author of the book of the Act of the Apostles also mentions something else which is very important, when describing the wonderful event of Our Lord’s ascension into heaven: “As they were watching, He was lifted up and a cloud took Him out of their sight. While He was going and they were gazing up towards heaven, behold, two men in white raiment came and stood near them and said “Men of Galilee, why are you standing looking at the heavens? This Jesus Who has been taken up from you into the heavens will come in the same way as you saw Him go into heaven” (Acts 1, 9-11). The heavenly powers of God, the angels, once again came earth to confirm the supernatural event of the Ascension and to announce something else: the Lord’s return to us, which will be as glorious and brilliant as His Ascension, as experienced by the apostles who were there at the time.

Our Lord Jesus Christ ascended into heaven, but did not abandon the human race, for whom He shed His blood. He may be sitting at the right hand of God in celestial glory, but His presence extends to the earth and to the ends of creation. He left His Church in the world, His own resurrected, incorrupt and deified body, in order for it to be the means of the salvation of all human persons who wish to be saved. The notional soul of His body is God the Comforter, the “Spirit of Truth” (Jn. 15, 26), Who came down into it on the holy day of Pentecost, to remain here until the end of the world. Salvation is accomplished by the organic incorporation of the faithful in the theanthropic Body of Christ. This is what He meant when he promised His disciples: “Behold, I am with you always, until the end of time”.

Saint Paul, wanting to stress the fact of Christ’s ascension to heaven and His boldness before the throne of God the Father, wrote that He is “the mediator of a new covenant, so that those who are called may receive the promised eternal inheritance, because of a death which redeems them from the transgressions of the first covenant” (Heb. 9, 15). We have received the “dispensation of grace” (Eph. 3, 2) as the sublime gift of His elevation. His bright throne in celestial glory is, from now on, God’s meeting point with people, because He Himself confirmed that “No-one comes to the Father except through me” (Jn. 14, 6).

So, within this joyous period of the Resurrection, the great feast of the Ascension comes to delight us further and to remind us that the glorious return of Christ our Redeemer to the throne of the divinity grants infinite gifts to humanity and the whole of creation. As the glorified God/Man He simultaneously participates in the created and uncreated, thus establishing a link of salvation between Creator and created. This is the quintessence of salvation and the central meaning of this great feast.