Death of the body contributes towards preventing evil from being permanent

People are born with a dual nature: they are both material and spiritual. With the dust of the earth, God made our body and He gave life to this body by breathing into it the soul. The soul and body are indissolubly united. Neither is superior to the other; neither is opposed to the other. To the body has been assigned the precious role of being the temple of the soul, not its place of confinement, as in non-Christian philosophy. The soul has been given to us as being bodiless, rational and immortal. Body and soul have been fashioned by the Creator to co-exist and collaborate in absolute harmony. In this way, the aim of human existence will be fulfilled, which is to be able to live in the eternal bliss of the presence of God. However, sin brings antagonism to the relationship between the body and the soul. 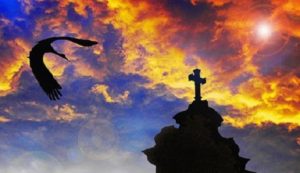 At the same time, the fall of Adam and Eve brought spiritual death, that is the necrosis of the sense organs of the soul, because of its alienation from and lack of communication with God. As Basil the Great so aptly puts it, ‘God is life, and loss of life means death’. Through the spiritual death of our forefathers, we humans have inherited sorrow, evil and mortality. The death of the body is therefore a concomitant of that of the spirit. To be precise, the soul is separated from the body, which then decays and dissolves. Death, however, wounds the body, not the soul. The soul retains the characteristic of immortality, which was granted to it by Grace.

But our God Who loves humankind, did not allow the death of the body to occur at the same time as that of the spirit, neither in the case of Adam and Eve nor of anyone else. In this way, He does not bring us to the point of despair, but gives us time to repent. The same purpose is served by the sorrows, the adversities and the trials of our earthly life. Besides, God has allowed death to penetrate human nature not as a punishment, but as a blessing. Death may wear the mask of evil, but it manages to bring to an end people’s sojourn in their sinful condition. Therefore, as Saint Gregory the Theologian puts it, death of the body contributes ‘towards not making evil immortal’.

The Lord’s favour and compassion is obvious not only from the observations above, but also from the fact that He has given us the hope of the Resurrection. Indeed, the first hint of this comes at the very moment that Adam and Eve were expelled from Paradise. Nevertheless, death remained the most repugnant, the most terrible event, even for the righteous, since all souls, after death, were taken into hell. But God’s goodness did not leave us helpless, at the mercy of decay and annihilation. Divine assistance is the first corollary of divine love, as George Florovsky put it. So the incarnation of the Divine Word gave birth to the hope of salvation for our souls and this hope became established though the Resurrection of Christ, Who was both God and human.

Christ overcame death through the crucifixion, the three-day descent in the underworld and His glorious Resurrection. The Lord’s voluntary sacrifice on the cross gives the chance of redemption to each and every person, without exception. And not merely in a transient sense, but eternally. According to Saint John Chrysostom, sin is the mother and wet-nurse of death. So Christ, the sinless and good Saviour, annuls this bond between sin and death and completely disarms death, abolishing the laws of mortality.

The first Adam transgressed against the commandment of the Lord and the consequences of his disobedience affect everyone. He condemned the whole human race to a state of sinfulness. The new Adam, Jesus Christ, obeyed God the Father even unto death, which in His case was an ignominious one, thus achieving the redemption of the disobedient and sinful human race. Just as the condemnation of the human race came about through one person, so by another One, God and human, all those who believe in Him have been given the chance of salvation. In this way, the path to heaven has been opened, hope has been established, optimism and joy are the order of the day and we have been given the means to transcend death.