Father Symeon : A servant of the holy mystery of Confession

In confession, as in the whole of his everyday behaviour, Fr. Symeon was all love. Love overflowed from within him. He radiated love, not with words, nor with actions, but with his mere gaze, his smile, with a single word. He was formal, but not a slave to formalities. I remember one incident in particular. He’d given me the number of his personal telephone, the one in his room. I would usually phone him between 11-12 in the evening, which was the best time for him because, as he explained: ‘Now it’s the afternoon for me’.

We’d speak without restraints of time, but he would still be up in the morning for his rule. One evening, around midnight, the son of a friend of mine, a spiritual son of Fr. Symeon’s, who was studying abroad, telephoned me. He was very upset and asked for help with a really important problem which needed to be resolved immediately. I was in no position to advise him. Only the Elder could do so, but how? At that time of night nobody would have answered a telephone call to the monastery. I hesitated to give his confidential telephone number, because he’d told me not to give it to anyone at all. The case was such, however, that I decided that I’d just have to go against his instructions. So I gave it. And the boy was saved. The father saved his son.  The next day I asked forgiveness for the infraction, but he told me not to worry and that I’d done the right thing. 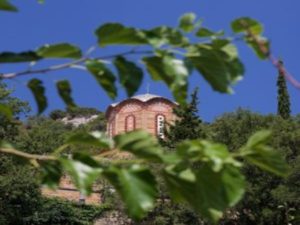 That was Father Symeon. A discerning, consoling and enlightened advisor to whom we had recourse and to whom we referred people with difficulties, so they could find refuge.

In his sermons, in his discussions, in confession, Fr. Symeon didn’t avoid taking a position on burning questions which others didn’t dare to touch on so as not to come into conflict with the prevailing, unhealthy atmosphere. Let me explain. There was at one time much ado generated over 666 and this was an issue that threw people into turmoil. Father Symeon did not leave his spiritual children in the dark over this. He clarified the issue in a series of talks, reassuring those who were worried. He did the same for bar codes and other similar issue which aggravated ill-informed believers[1]. In general, he dealt with important ecclesiastical and theological issues with clear thinking, theological depth and knowledge of the Patristic tradition. And all of this with sobriety, without any spirit of contention.  If ever I wanted a second opinion on my own articles on Church matters, I would submit them to him and he would always make useful observations. For example, if I used acerbic language, he would suggest I tone it down.

In general, his discourse was prophetic. He did not ignore dogma, he was never restricted to dry moralizing, he used neither clichés nor soaring rhetoric. Well-grounded, comprehensible, he spoke in the name of God, telling the truth, castigating lies and thus bringing the faithful to his way of thinking. Listening to him, you felt that you were listening to the word of God, that his discourse was official, authentic and valid. He didn’t impose himself through human coercion, but spoke rather ‘in the Holy Spirit’. Without prevarication, he went straight to the heart of the matter and didn’t mince his words in order to please people. He told the truth of the Church, without pulling any punches, however hard this seemed to many people. He was a prophet in the Biblical sense, shaking people up to get them to cast off the fripperies with which their egotism had burdened them, so that they could see naked reality clearly.

[1] This may be the best example ever of a little knowledge being a dangerous thing. 666 in Western script is simply three sixes repeated. In a bar code that’s exactly what they are, wherever they occur, separately or all together. But Saint John, in the Revelation, wrote that the number of the beast is χξϛ΄, where χ= six hundred, ξ= sixty, ϛ= six, and ΄ indicates a number. No matter how you split them up, you’re still left with six hundred, sixty and six. WJL.