The center of Theology of Father Symeon Krayiopoulos

His discourse was also theological. He never ignored dogma, never indulged in moralizing, empty verbiage or flights of fancy. He spoke well, was comprehensible, and used theology, not as a system of knowledge, but as the essence of life, which imbues the whole of human existence. The centre of his theology was the Bible, which he knew in depth. His sermons were, at bottom, Biblical and he recommended that his ‘children’ read the Scriptures, and, indeed, he set a chapter of the New Testament to be read every day, by all of them. He immersed himself in the Scriptures, engaging with the text and enjoying the interpretational footnotes, both Patristic and modern.

We would often speak at length on the telephone about one passage or a single word.

His theological discourse wasn’t superficial. He knew theology in depth, he was up-to-date with theological bibliography and followed developments in academic theology. He was usually present at conferences of the Greek Society for Biblical Studies and took part in the discussions, reminding people, through what he said, that theology isn’t merely knowledge, but also an experience, without which knowledge ‘is puffed up’. And all the days of the conferences, when Fr. Symeon circulated as an ordinary member, he emanated the fragrance of Christ with his words, his smile and his presence. At one such conference in Cyprus, during a break, a professor from Thessaloniki approached a group of a few young people who were talking to Fr. Symeon and said: ‘Do you know what a blessing this moment is for you. In Thessaloniki we get to enjoy Fr. Symeon’s presence in drips and drabs. You’ve got him here when and for as long as you want’. 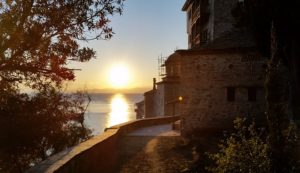 His theological discourse was also niptic. He enjoyed the niptic fathers and imitated them in word and deed. The saying attributed to Saint Neilos: ‘If you’re a theologian, you’ll pray properly; and if you pray properly, you’re a theologian’ (On Prayer 61) was a rule of life. The silent assemblies, of which we spoke above, are a small example of his desire to teach the method of the prayer of the heart. And even if these silent assemblies have not been generally adopted as his vigils have, they were of great benefit, because the idea spread of using a prayer-rope and saying the Jesus prayer. Until then, it had been unknown to the wider public, neglected or held to be something that was appropriate only for monastics.

I realized just how much Fr. Symeon was imbued with the spirit of the prayer of the heart, how much he was himself niptic, from a long discussion we had as we were returning from a conference of the Greek Society for Biblical Studies on Patmos, the first of a series, at the end of September, 1975.

As we were sitting in the stern of the ship, in the moonlight, returning from the island of the Revelation, he showed himself to be a great niptic father, a holy teacher of the prayer of the heart. He was taken up, speaking from another world, and I tried to follow him, drinking in his words. We parted past midnight, with the feeling that we weren’t done with the subject. How could we be when ‘perfection is never-ending’?

Fr. Symeon never advertised his work. He never challenged anyone in his homilies. You learned about him from other people. I recommended his talks to someone and he said to me afterwards: ‘You mean there’s somebody like him in Thessaloniki and you didn’t tell me earlier?’