The Magnates and the Destitute in Byzantine Legislation

The consumer society and capitalism are associated with the effort to accumulate wealth and material goods and with personal prosperity. But when some people manage to concentrate in their hands a great deal of material wealth, this means that some others are deprived of it. In this way, social injustice is created and people are divided into the rich and the poor. Of course, the ‘spirit of capitalism’, as desire, ostentation and enjoyment is associated with all social classes. We shall look below at how the Christian Roman Empire (‘Byzantium’) addressed the problems which arose from social injustice.

With its headquarters in Constantinople, so-called Byzantium, the Christian Roman Empire was distinguished for its charity, which is how it survived for a thousand years and why many scholars study its life and civilization, as well as the whole of the internal and external policies which the Emperors followed. All social issues, as well as their general policies, were imbued with Christian teaching. Of course, any number of mistakes were made, since sin is never absent among people and societies, but in general their orientation was correct. This is apparent also from the way in which the Romans (‘Byzantines’) attempted to solve a variety of social problems. 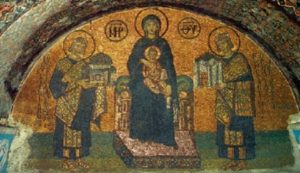 In his book Byzantine Civilization, Steven Runciman quotes a great deal of information about the life of the citizens of the Roman Empire on all levels and in all areas. As regards the way it was administered, he writes that we might call the ideals of the Byzantine administration socialist. Everyone had to be good citizens of the state. But the class of great landholders were unable to adapt to this mode of administration. In particular, from the ninth century there was great turmoil for a number of reasons and so there was an increasing tendency for the aristocracy to enlarge its possessions and for small farmers to be bought out and become hired hands.

There were two classes in Byzantine society. The ‘magnates’ and the ‘destitute’. Runciman writes that the administration made a clear distinction between the rich, the ‘magnates’ and the poor, the ‘destitute’. In general, an effort was made to restrict the aristocracy to military duties alone, keeping the civil services democratic and free. Throughout the 10th century, the main concern of the emperors was to adopt laws which attempted to restrict the opportunities for the aristocracy to buy the lands of the poor.

This was the same phenomenon that we see today, with the widening gap between the rich and the middle classes and between the bourgeoisie and the poor. In our own time we see that everything is being made easier for the rich and nothing is being done to alleviate the plight of the poor. However, the way the Christian Roman emperors acted in this sphere was very different and is worthy of our attention.