The necessary incisions for the heart’s purification of the passions

It wasn’t an easy matter for someone to become a disciple to an Elder such as Elder Iosif the Hesychast. Many tried, but couldn’t manage and left in the end. This is why the Elder didn’t initially want to accept Fr. Sofronios. But once he’d accepted him, by divine information as we’ve already mentioned, he was demanding with his disciple. And this, of course, was not for self-serving reasons, because he was always concerned about the spiritual benefit and progress of his disciple. He trained him with strictness and love, with penances and admonishments. He made the necessary incisions to cleanse his heart of the passions, so that he could begin to experience the Grace of God and sanctification. 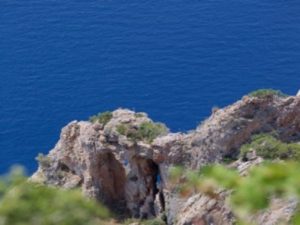 Our Elder Iosif lived as a disciple of Elder Iosif for twelve years. He lived in Little Saint Ann’s for six years. Living conditions were very harsh there and the regime was very strict. There were also the health problems he had, to an extent which endangered his life, with gastrointestinal bleeding and spitting blood. Nevertheless, the young monk kept his faith and didn’t give way, instead leaving even his health to the paternal care of God’s Providence, following the example of his own Elder, who saw everything through the eyes of faith rather than on the basis of reason. When our Elder began spitting blood, Elder Iosif said: ‘Arsenios, that’s it. We have to leave. If Iosif falls ill what’ll we do here?’. Haralambos was a priest, Papa-Efraim had been sickly from the beginning, Elder Arsenios was 70 years old, so they had a problem of upkeep, of who would carry out the everyday tasks, since it was our Elder Iosif who undertook them.

In September 1953, one moonlit night, they hoisted their few belongings onto their shoulders and made their way down to New Skete to some abandoned ‘huts’ [houses] situated around the tower of the skete. For a year, from May 1957 until May 1958, our Elder Iosif served as Supervisor of the skete. Even before the demise of his spiritual father, Iosif the younger had acquired spiritual riches which, out of his great love, he spread to those in need of advice or comfort. There are letters from that time which indicate the great height of the spiritual experience of the disciple monk Iosif, while his theology didn’t come from academic knowledge, which in any case he didn’t have, but from his personal experience.

When Elder Iosif the Hesychast fell ill with congestive heart failure, in January 1959, our Elder Iosif took the initiative of seeing to a cure for him. He writes in a letter: ‘Without asking him, because he wouldn’t have let me, Papa-Efraim and I made sure a doctor came from outside the Mountain straight away and it seemed that, by God’s grace, we won the battle. The doctor was as good as you could have asked for and his diagnosis was sound. Now we’re following the prescription for the course of treatment and the results are good. The ailment is in the heart and it’s in an advanced form, but we’re hoping for good results, given that, before, all seemed lost’.

In the end, Elder Iosif the Hesychast feel asleep in the Lord in a saintly manner on the day of the Dormition of the Mother of God, whom he so greatly revered, 15 August, 1959, at the age of 62. At the urgings of his own spiritual children the younger Elder Iosif began to write the Life of his spiritual father and in 1963 had completed the first biography, in epistolary form [11].