Obedience to be the most important virtue for a monk

Even though the blessed Elder Iosif was a great hesychast, he considered obedience to be the most important virtue for a monk. This is why he trained his disciple to gain the spirit and the fruits of true obedience, even though to some it may appear that his manner of doing so was harsh. He himself used to exclaim and urged his disciples: ‘Oh, blessed obedience- and again obedience. Without doubt the scepter belongs to you. Elder Arsenios and I have shed lots of blood in our ascetic life in order to taste the good things of heaven. Just with the observance of obedience, you’ll enjoy the same Grace as us. Cleave to obedience with all your soul. There’s no other way that’s easier or superior to it’. [5].

The blessed Elder considered ‘the mystery of obedience to be really and truly great’. He writes in one of his letters: ‘Obedience or disobedience don’t stop with the Elder, but through him reach God Himself… [A disciple] should regard his Elder in the same way as he would Christ’ [6]. 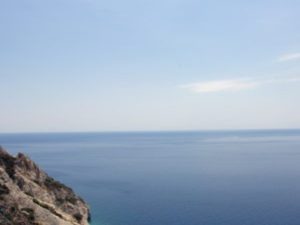 Our Elder Iosif was extremely good at manual tasks or building skills. It was he who made the new kelli of his Elder in Little Saint Ann’s and he who undertook any repairs need for its upkeep. One morning, he was going to make a wood-stove for his Elder, because the cold that winter was really unbearable and the Elder was much weaker than he’d once been. But for some reason everyone went wrong and there was a great deal of demonic activity. So he went to his Elder to ask him what was going on. He recalls: ‘I went and knocked at his door and he opened it. As soon as he saw me all upset, he started to laugh. I said, ‘What’s going on here, Elder? Why did you say to me this morning “if you finish”? You know that’s child’s play to me’. ‘So what do you think happened?’ he said, jokingly. ‘A temptation’, I replied, ‘satanic action’. ‘So it was’, he answered. ‘And listen and you’ll learn what looks to be a mystery to you. Last night, while I was praying, when I’d finished and wanted to rest, I saw the devil and he threatened to bring obstacles to a decision I’d made. And I said to Christ: Lord, don’t stop him so that I can show him that I love you and will suffer the cold, as far as you’ll allow it. This was the reason all this happened, son. So that I wouldn’t have the heating that you wanted to make for me’. [7].

On Lazarus Saturday, 1948, Father Sofronios became a monk of the great habit and took the name Iosif. He took the name of his Elder, as a special honour and blessing. His Elder confessed to his newly-tonsured disciple of the same name that he was ‘full of Grace’ because he was a ‘worker of obedience. The priest who officiated at the tonsure was Papa-Efraim Katounakiotis. After the blessed Elder Iosif fell asleep in the Lord, Papa-Efraim became the spiritual father of our Elder Iosif and the two ascetics were bound by unbreakable spiritual love, having both been under the same spiritual father previously.

Elder Iosif the Hesychast revealed his sublime spiritual experiences to his disciple, in order to strengthen him spiritually and prevent him from being discouraged in his struggle. So he told him about a visit he’d received from Our Lady the Mother of God in the chapel of the Honourable Forerunner in Little Saint Ann’s, when he was much troubled by various external trials and slanders. Our Lady herself appeared and said to him: ‘Didn’t I tell you to set your hope on me? Why are you discouraged? Here, take Christ!’ And then Christ, the divine infant, stroked him three times on the forehead and the head and filled him with ineffable fragrance and spiritual elation [8]. Another time, he said he saw in his soul, as if on television, Fr. Athanasios coming from the Monastery of Saint Paul to their hermitage [9]. He also described in detail the divine visions which the Grace of God revealed to him, such as the city of God, or Paradise [10].