A sailor distinguished for his purity: The Holy New Martyr Triandafyllos

Martyred in Constantinople on 8 August, 1680. 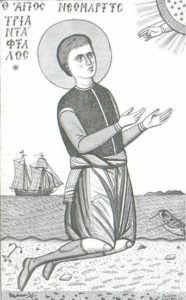 The saint came from Zagora in Magnisia. He worked as a sailor on ships and was distinguished for the purity of his life and the modesty of his morals. He also kept the flame of his love for Christ burning in his heart. Seeing this, the evil enemy raged against him.

Thus, when he was no more than seventeen years old, he was arrested, we know not why, by the Turks, who wanted to force him to renounce the faith of his forefathers. They took him to Constantinople where he endured all manner of tortures. But the Saint set no store by either his youth or the attraction of the goods offered to him by the infidels.  He did not betray his faith. He kept telling them: ‘I’m a Christian and I’ll not deny Christ, my Savior’. In this way, he confessed the Lord, as the Lord will confess him before the Father and thousands of angels, in accordance with His promise.

In the end, he was put to death at the site of the Hippodrome, thus winning the crown of victory and martyrdom from his Lord.