In an article in the Daily Telegraph, following the murder of French priest, Fr.  Jacques Hamel, in Rouen last week, Charles Moore wrote: ‘Islamism is a most clear and determined attack on our civilisation, so this must be recognised’. Now, Mr. Moore is a well-known conservative commentator, so his comments are, perhaps, not entirely surprising, though not necessarily any the less true. President Hollande of France, however, is no conservative, but he, too, said after the attack that France is ‘at war’ with Isis. Across the political spectrum, then, there is agreement that we are under attack from Islamist extremists (with the exception of the White House, which gave a wonderful display of strouthocamilism [sticking your head in the sand], the disadvantage of which is that the parts of the body available for dialogue do not include the brain).

It has rightly been said that our ire should not be directed against those Muslims who are not responsible for acts of terror. This was reinforced by the appearance at the Democratic Party Convention in Philadelphia last week of Mr Khizr Khan, whose son, a captain in the American Army, was killed on duty in Iraq. In an intensely moving and eloquent speech, Mr. Khan-  a Harvard lawyer- described how he went to America with nothing and prospered, due to his own hard work and the opportunities offered to him by the country. His son appears to have been a fine young man and is rightly regarded as a hero. 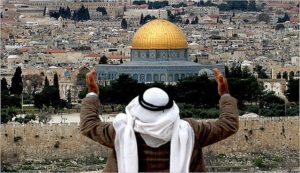 But how typical is this family? Again, following the murder of Fr. Jacques, dozens of prominent Muslims published a joint letter warning that ‘the risk of fracture among the French is growing every day’. The signatories, included academics, as well as medical professionals, artists and business leaders. These people, however, are a very small percentage of France’s 5 million Muslims, many of whom live in desperate conditions in suburbs around major cities. On a similar note, one of the best newspapers I read on-line is the Pakistani Dawn. I recommend it highly because it carries very thoughtful articles and analysis of current events, written in excellent English. And that is the point. Its readership is a well-educated urban elite, not the millions of poorly-educated people in rural areas, who are just as much Pakistani and just as much Muslim. Watch- it’s very easy these days- a cricket match involving Pakistan and you’ll see a fair number of excitable young ladies dressed as they would be in the west. But contrast this with the way women are treated under sharia law.

The point here is that we need a more nuanced approach to Muslims who are not guilty of atrocities. This may seem harsh, but ignoring the problem won’t make it go away. The son of Mr. Khan was an Army captain and a hero and his family has every right to be proud of him. What of the family of Major Nidal Hasan, a psychiatrist who killed 13 and wounded 30 people at Fort Hood in 2009? They all insisted that Hasan, who was born and raised in America, was a very gentle, sensitive person. It’s also being reported now that French prosecutors are saying that the cousin of one of two teenage jihadists who executed the French priest knew he was about to commit an attack and should therefore face terror charges himself, for not reporting them. In 2013, Britain was shocked by reports of wide-scale child sexual abuse in Rotherham by a group of Muslim men. These reports estimated that 1,400 children had been sexually abused in the town between 1997 and 2013. The question here is whether it was really possible for this to have happened without at least some other members of the Muslim community in the town knowing something about it. If they did, and if they chose not to report it, do they not bear some responsibility?

Which brings us to the second point that’s often made: that we need to work with moderate Muslims. Of course we do; that almost goes without saying. The problem is how do we persuade these moderate Muslims to work with us? Some will, of course. The new mayor of London is a Muslim, for example. But many Muslims, immigrants and second and third generation, appear to be very clannish and seem to have particular difficulty in integrating. Various public institutions in a number of countries have caved in to Muslim demands to remove pork products from menus in canteens (I haven’t seen any reports of similar requests by Jews, who also don’t eat pork, or by Hindus for the removal of beef). There are demands, even among moderate Muslims for (greater) recognition of sharia law. Women want to appear in classrooms and in court with their face covered. And so the list goes on.

What is disturbing is that other groups don’t seem to have the same difficulties in integrating. In Britain at least, Jews, Hindus, Sikhs, Chinese and West Indians all have their own communities but also have a great degree of interaction with the wider society around them. Alas, this seems to be less true of Muslims.

This is in no way an anti-Muslim rant. As Christians, we know that we’re all God’s children and therefore, in some sense, family. It simply seems to me that if one member of the family is finding it difficult to relate to the other members, then, as Charles Moore says, we should, at least, recognize it. Otherwise, how can we find a solution?