During the stay we live in three-bed, four-bed and eight-bed rooms in different monasteries, and take part in the daily lives of the monks. The services often start at 3 o’clock in the morning, and there are only two daily meals. They are all vegetarian and last for a grand total of ten minutes.

The pilgrims thus have more time for conversation and getting to know one another. All of them have a Lutheran background. Two of them, Lars Karlsøen and Bjørn Skauen, have even been priests in The Lutheran state church of Norway. Several of them have sought refuge in the Orthodox Church from what they see as heresy, modernism and worldly influence in Protestantism. 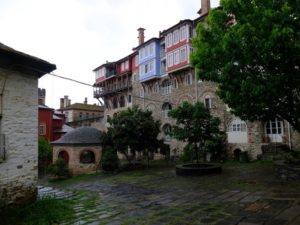 – I experienced that the Norwegian state church no longer had room for me. When I am here on Athos and see the spiritual riches of the Orthodox tradition, I can’t help thinking that Martin Luther made a great mistake in doing away with monasticism. The monasteries are guarantors of right doctrine, and the monks are models for the laymen when it comes to worship and obedience, says Karlsøen.

– The first time I visited an Orthodox church the liturgy was in a language I did not understand. Even so, I experienced it and tears started flowing, says Thorleif Grønnestad. He converted over 10 years ago, and is today in charge of typica services in his home town Sandnes.

Still, they do not paint a rosy red picture of the situation in The Orthodox Church. In some places the organization is poor, in others there are issues of nationalism. One of the pilgrims, Dag Markeng, has a striking comment.

– When I became Orthodox in 1983, my sponsor said something that I have found to be true. It won’t be easy being Orthodox – but it will be worth it.