Our Lady the Mother of God and the Paraclitic Canon – 2

The Paraclitic Canon to the Mother of God

The day of the Dormition of the Mother of God is a high feast. In the life of the Church, the dismissal hymn and kontakion for the feast explain why: “In giving birth, Mother of God, you retained your virginity, and in your Dormition you did not abandon the world. You who are the Mother of Life have passed over into life and by your prayers you deliver our souls from death”. “Neither the tomb nor death had power over the Mother of God, who is always watchful in her prayers and in whose intercessions lies unfailing hope. For as the Mother of Life she has been transported into life by Him Who dwelt within her ever-virgin womb”. 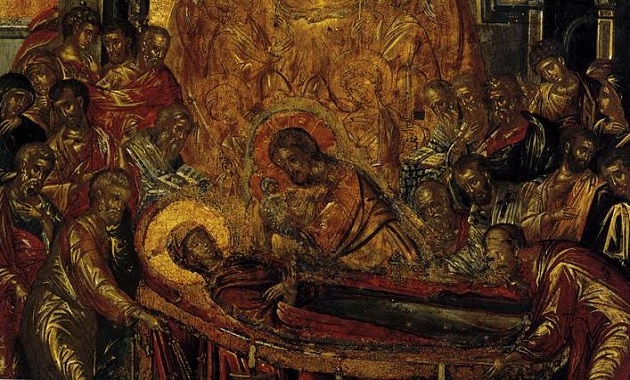 Initially, this feast of Our Lady was moveable, but then, at the behest of Emperor Mavrikios, was established on 15 August.

Nowadays, the feast is preceded by a period of compunction lasting two weeks and every evening we Orthodox gather in our churches in order to sing the Paraclitic Canons to the Most Holy Mother of God.

We have recourse to Our Lady and sing the canons because we firmly believe, together with the poets who wrote them that “No-one who hastens to you leaves disappointed, pure Virgin Mother of God, but they ask for grace and receive profit from their request”. Our experience of the countless bounties we have received from the Queen of the Heavens prohibits our silence: “We, though unworthy, never cease from telling your mighty works, Mother of God. For had you not shielded us and interceded for us, who would have delivered us from such dangers and how would we still be free? We cleave to you, Lady, for you forever save your servants from all manner of adversity”. “I do not hide the depth of your mercy nor the fount of your unlimited wonders… but I confess, proclaim and announce them to all and rejoice in them”.

We confess our sinfulness before the Mother of God, we express our cry of anguish to her, the pain of our soul and body and the sorrow, all of which make us feel that “our life has drawn nigh to Hades” Of course, we don’t lose heart and we don’t bemoan our fate as those do who have no hope, but sing from the depths of our hearts “fill my heart with joy Virgin… you who expunge the sorrow of sin”. We place all our hopes on her, because we know from experience that she really is merciful and that, as the Mother of God she is a fount of mercy, the only refuge of the world and “unfailing Mediatrix before the creator”. Moreover, we request her to govern our lives and as the “invincible bulwark and protection” and “most secure citadel” that she is to “keep us safe from the “flighted arrows of the demons” which fly around us and which we are unable to withstand alone. And so we Christians really do experience the summer Easter.

So on those days, apart from at Vespers on the Saturdays and the eve of the feast of the Transfiguration of the Lord, we sing alternately the Small Paraclitic Canon, which is a poem by a hymnographer called Monk Theostiriktos, or Theofanis, to give him his secular name, and the Great Paraclitic Canon, a poem composed by Theodoros II Laskaris, the emperor of Nicea, who lived in the 13th century. 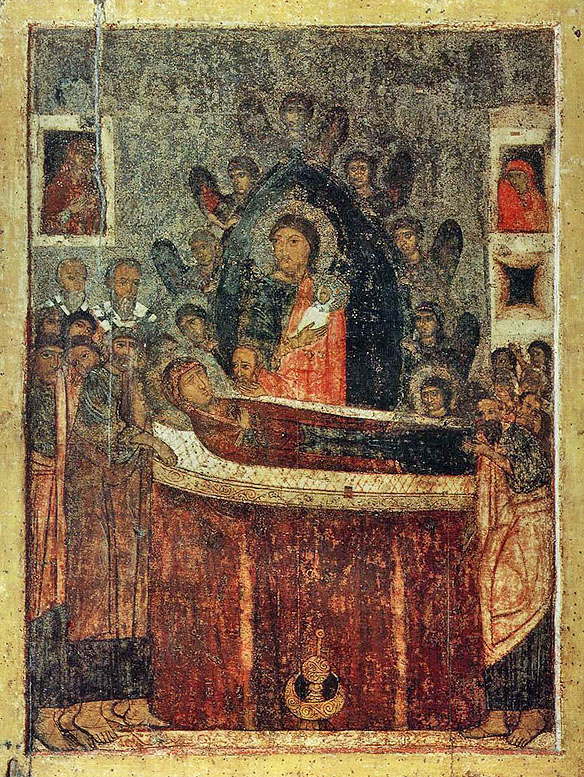 We have little evidence concerning the identity of the Monk Theostiriktos, who composed the Small Paraclitic Canon. As regards Theodoros II, we know that he was the son of the emperor and saint Ioannis Doukas Vatatzis and Eirini Laskarina. It is reported that Emperor Theodoros suffered from a malady that produced severe depression, from which he prayed to be delivered. Indeed, it appears that sometimes he disregarded his spiritual struggle which is why he often repeated the phrase “I have abandoned you, Christ”.  His prayers, therefore, took the form of intercessions to Our Lady after he came to know Saint Theodora, the Empress of Epirus, who had great reverence for the Mother of God. It was from the saint that he learned to turn to Our Lady in difficult times, when he was burdened by depression, and to ask her to soothe the pain and bring him divine grace and comfort. In this Paraclitic Canon “the sufferings and tortures of a soul are put into song… where a Greek emperor, pursued, fought against, worried, by Latins and Arabs and his own people, puts into song to Our Lady his own pain and the persecutions that he suffered from the hordes of the barbarians, which he calls “clouds”, as Alexandros Papadiamantis notes. The Paraclisis of Theodoros II was given out to the Holy Monasteries of the region, where a service was composed, and from there spread throughout Byzantium, as the Great Paraclitic Canon.

The fact that the two Canon services are held on alternate days is probably due to the set of historical circumstances which marked Byzantium in 1261. In that year, during the reign of Mikhaïl VIII Palaiologos, the Reigning City, Constantinople, was recaptured without bloodshed and this was attributed to the miraculous intervention of the Mother of God. Mikhaïl wanted to enter the City in procession and to address his thanks to Our Lady. But since, at that time, the Great Paraclitic Canon of Theodoros II, his predecessor, was being sung, a compromise solution had to be found. It was suggested that the older, Small Paraclitic Canon to Our Lady the Mother of God be used instead. Since then, the use of the Great Paraclitic Canon has been restricted to the fast for the 15th August.

The services of the Paraclitic Canons, then, which fall between the two great feasts of the Church, Easter and Christmas, are held so that we can address supplications and prayers to Our Lady, our sole mediatrix with our Philanthropic God, so that we will be granted mercy and the strength to ascend our Golgotha, where the ineffable joy of the resurrection is experienced. Because the resurrection is not to be found beyond the cross but is granted right there upon it.

Let us pay all due honour, then, and like the great preacher Ilias Miniatis (1669-1714) let us implore Our Lady the Mother of God: “You who are full of grace and glorified, the Queen of All, from the exuberant radiance of the divine light you enjoy, standing on the right of your only-begotten Son, send down to us here, your devout servants, a blessed ray as light to our endarkened minds and a flame to our ice-cold will, that we may see to  hasten to tread in the way of the divine strictures. After God we have our hope of salvation in you, the Mother of God and Mother of us all; from you we hope in the victories of the most serene Power, the trophies of the God-fearing Emperors; the firm foundation of the Church; the defence of the race of the Orthodox; the shelter of this habitation, which is dedicated to your peaceable assistance. Indeed, Our Lady Virgin, indeed, Mary, the name which is the joy, comfort and boast of Christians, accept the fast and supplication of these holy days, which we have made in your honour, as welcome incense. And count us worthy, just as we embrace here in Church your holy and wonder-working icon, so, too, in Paradise, to see your blessed face, which we shall venerate as we do the Father, Son and Holy Spirit, throughout the vast ages. Amen”

Source: www.churchofcyprus.org.cy, the web-site of the Church of Cyprus.