According to Chrysostom, the fact of the eschatological stipulation in Christian ethics doesn’t at all mean flight or escape from the world, but, on the contrary, facing up to it and orientating yourself to its real objective, without which it loses all meaning. Apart from anything else, the state is the “authority” or “principle” which, if it’s disorientated, bolsters and reinforces the kingdom of the devil; whereas if it’s properly aligned with its true objective, brings back the kingdom of God. There’s a mismatch between Church and state when the unified eschatological aim is split. 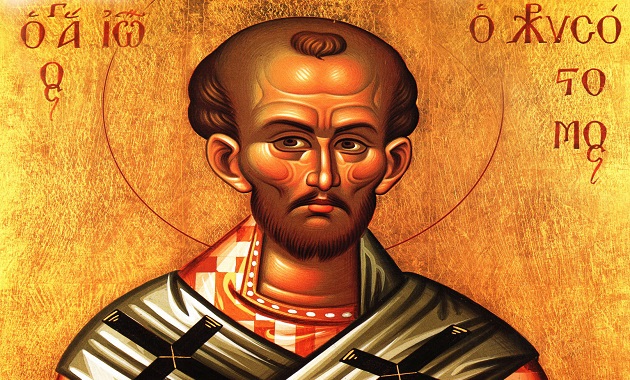 Chrysostom  always examines the state from the point of view of its eschatological dimensions. For him, the state is a feature of the present life. There was no subjection to overlords in paradise, in the original state which was free of any kind of subservience. This, of course, is contrary to the view of the Church of Rome, which derives authority and subjection from nature and the creation (societas naturalis). According to this view, the degrees of authority and subjection would have arisen in any case, even without the fall, because they’re supposed to be eternal law.

There is, though, the caveat that any abuse is due to the postlapsarian condition of the human race. Chrysostom, however, associates any kind of “subjugation” with “sin”. He thus considers that the reason for subjection is the tarnishing of the “image and likeness of God” and the abnormal manner in which people live together. He analyzes this subjection in his 29th homily and in the 4th discourse on Genesis, where, as Fr. Theodoros Zisis rightly observes, he attributes its introduction to the “sin” of Nimrod, that is the abuse of his bodily strength, thanks to which he was able to impose himself as an “arrogant tyrant” and “ruler and king” who “discovered another form of servitude”. It follows that this feature is necessary, if it’s viewed as deriving from the providence and mercy of God and as a means of healing. The eschatological perspective of Chrysostom denotes not only its provenance but also its therapeutic objective.

Interpreting the Pauline saying “established by God”, referring to authorities, he acclaims not only the necessity for the medicine of authority as a consequence of sin, but also its usefulness as a means and result of divine mercy and providence. We shall now follow the thought of this Father of the Church as regards the way in which he interprets this means eschatologically.

The comparison of the state as a “medicine” and of rulers as “doctors”, expresses the eschatological prerequisite and the objective of the institution. He also likens the state to “education” and rulers to “pedagogues”, who guard people from a tendency towards sloth. Moreover, he sees the authority of the state as carrying out an important task, by protecting people from anarchy and making it possible for them to live together. Because, if there were no rulers, “we would lead a life more irrational than that of the irrational beasts”. He insists that authority is an “envoy of peace”.

He considers it the most important of the necessary arts: “without this, there is no benefit from them”, he says. Beyond this, the positive contribution of the ruler, naturally, lies in the fact that he is a factor urging people to exercise virtue “both by fear and through honours”. In this way, he prepares souls to accept teaching reasonably. This is why  he uses Paul’s expression “the servant of God” for the ruler (Rom. 13, 4). This is also why Paul recognizes the right of  rulers, which had always been in force, to be maintained by the people.

He actually makes the point that, when Christ responds to the question of whether the poll tax should be given to Caesar, He uses the verb “render” (Matth. 22, 17-21) which means returning a debt to the real owner as  his due [from the Old French render, ultimately from Latin reddere “to restore”]. Moreover, Paul tells us to pray for the rulers (I Tim, 2, 2).  Consequently, authority is considered to be something that contributes to the exercise of virtue, contributes to people’s restitution and perfection, and serves the eschatological purpose of God.

It is a fact, however, that, in the degenerate condition of the world after the Fall, there’s always been the danger that the eternal weakness will completely overturn the order of things and that this “servant”, or “pedagogue” or “Caesar”  will deify himself, will go beyond the “familiar bounds” in terms of wielding the authority given to him by God and that he’ll become, in fact, a delusional rebel. In this case, the result is abuse of authority and conflict with the will of God.

But the abuse of authority by some rulers doesn’t, in itself, cast doubt on the role of the institution as a positive factor or pedagogue, but it does give Chrysostom the opportunity to note some other dimension of his eschatological position: cure requires the right doctor. He repeatedly emphasizes the fact that the first duty of a ruler is “to govern himself” and apply the law. By finding the meaning of “ruler” in “service to others”, and “benefitting the governed and doing good works”, he posits unselfish service and a soul purified of the passions.