Following Paul and the Bible in general, Chrysostom  says that a Christian can be subject to non-believing rulers. He recalls that, when Paul  gave his support to obedience to rulers, he was himself living under the regime of a persecutor. This certainly doesn’t represent the will of God, but in the eschatological scheme of things this subjugation is temporary and has as its purpose only the peaceful settlement of current problems. In the event that the ruler didn’t possess the moral fibre required, the task of the Christian was not to seek salvation by fleeing or rebelling, but rather to save the ruler himself from his own aberrance. In the well-known saying of the Apostles, “Obey God rather than other people” (Acts, 5, 29), he seems not to have seen rebellion, but rather the forbearance of the Apostles, their “serenity”, their fearlessness and their efforts to bring rulers out of delusion. 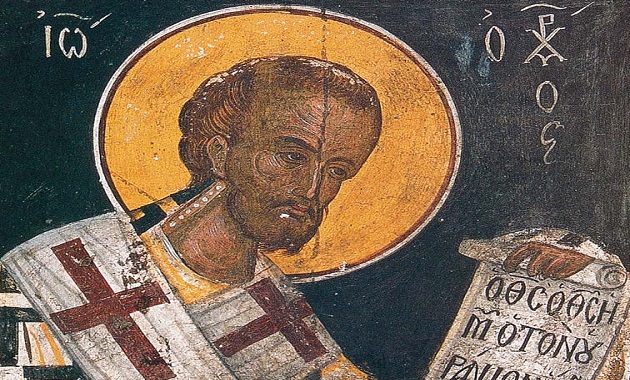 Thereafter he emphasizes, with eschatological significance, that the injustice of the rulers was, for the Apostles, a source of joy. The only real injustice is sin; so he lauds the Apostles’ pertinacity in affliction. In none of his texts does he seem to have a rebellious attitude. The efforts of Christians should be directed towards becoming free from sin, rather than free from unjust rulers. Relieving the ruler of the burden of injustice, as a concern of Christians, was for the benefit of the ruler himself, not of the Christians. Chrysostom  maintained the same attitude when he was exiled; there’s no mention anywhere of rebellion, but rather it seems that he rejoiced in his trials.

He accepted the institution and disregarded the persons. For him, the appropriate solution was a return to humanity and preaching the message that was capable of changing the world. Of course, this outlook  was due to the time when the New Testament came out: its message was just beginning to be heard and it had to be clearly understood that the Apostles were not teaching any invalidation of common law. That would have exposed them to all sorts of unnecessary and pointless temptations.

b). The Relative Importance of Church and Civil Authority.

In explaining why he recognizes secular authority, how important this recognition is as a “service” within the divine plan, and how much the state contributes to the perfection of people, Chrysostom  makes it clear that he considers it, as a “servant”, greatly inferior to the Church. The service of the state simply assists the work of the Church and trains souls so that they’re in a position for the service of the word of God (the Church) to find them. The Church differs from the state as much as heaven from earth or the soul from the body; a priest is as far superior to a king as the spirit is to flesh. Apart from the indication of superiority in these similes, the view of the holy Father on the purpose of each authority is also expressed.

The superiority of the Church derives exclusively from its eschatological dimension, which the state lacks. The Church, for example, has the authority “to bind and to loose in heaven”, whereas the state has this power only on earth. The state has no interest in anything beyond the “natural man”, while it’s only the Church that recreates the “spiritual man”. The superiority of the Church lies in spiritual rather than secular matters. And in its method. The state persuades by force, but the Church with freedom; the former forbids, the latter admonishes; the state is interested only in punishing, but the Church seeks to cure and root out the cause of evil. The state has human thought as the source of its legislation, and sometimes errs; the Church, leaning on Scripture is always God-inspired.

The state aims at making it merely possible for people to live together, whereas the Church wishes to ensure real fraternity. And while secular power divides people, the Church, on the other hand, is “the name of unity and agreement”. The organization of civil celebrations and events is based on distinctions and divisions between people, whereas the Church unites the divided: the table is for all, grace makes no distinctions and its laws don’t create classes. In general, the Church “does not divide the community into classes”.

People who are spiritual fulfil and transcend the laws of the state, because the Church doesn’t merely require that people be responsible for their wrong-doing, but tries to bring them to the task of promoting the virtues. Chrysostom’s conclusion is that real Christians control their lives far better than the state can, as he notes in the above comparison in his Homily 15 on Corinthians II: “So that Christians direct their lives much more by our own laws than by any outside ones” This is why “any benefit in life and any rectification of the world” will come from the Church.

In any case, the fact that Chrysostom left his post only after violence had been used against him demonstrates his conviction that a Christian emperor ought to be subject to a priest.

To conclude, this differentiation of importance is entirely eschatological. So if the Church loses its eschatological perspective, it automatically also loses its unique identity and is transformed into a secular institution in the same sphere that’s already covered by the state, and then it’s natural that, to justify its existence and the need for it, it has recourse to intervention in politics or to social works, as we see  in the case of the Church of Rome and of Protestantism.