”She shut the door in his face, berating him for his rejection of Christ”: Martyrs Adrian and Natalia of Nicomedia 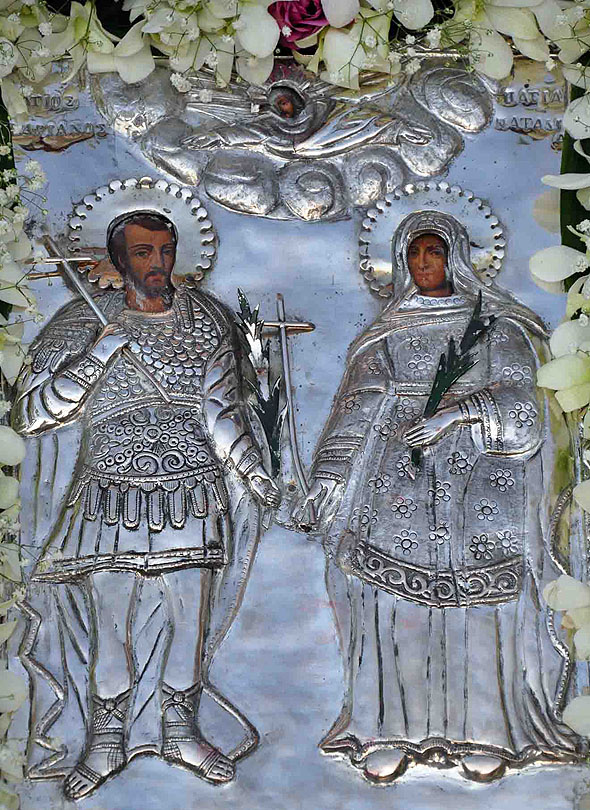 The holy martyr Saint Adrian and his wife, Saint Natalia, both came from Nicomedia. In the second period of the reign of Maximian (286-305), twenty-three Christian men who had been hiding in caves were arrested and subjected to a variety of tortures and abuse. Before they were put to death as martyrs, Adrian asked them: “My good people, why are you putting yourselves through these unbearable and vile punishments?”. They answered: “In order to win the good things God has prepared for those who suffer for Him, which, of course, are beyond the ears of people to hear and the human tongue to describe”[ cf. “which neither eye has seen nor ear heard, nor have entered into the heart of man” (I Cor. 2, 9)]. 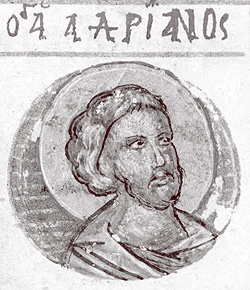 At once, the blessed Adrian, inspired by divine grace, turned to the scribes who were writing the names of Christians who were about to undergo a martyr’s death and said: “Add my name. Really, I want to be numbered with them”. So they wrote his name and, when he’d been bound with chains, he was cast into prison. When his wife, Natalia, learned about his arrest and imprisonment, she assumed that it was for another reason and she was greatly upset. But later she discovered the real reason for her husband’s incarceration. She put on fine clothes, hurried to the gaol-house, went inside and showered with kisses the chains with which his hands were bound. Not only that, but she praised him for his zeal and urged him to bear with fortitude the unbearable pain of the tortures, remaining unshaken and unmoveable in his faith in Christ. She also asked his Christian fellow-prisoners to pray for him. 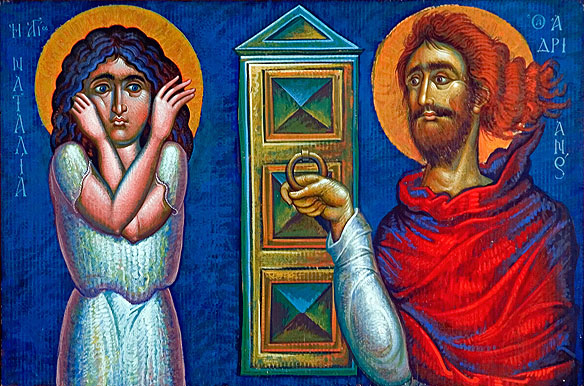 But then, on the insistence of Adrian, Natalia returned home. After a short time, Adrian had the feeling that they were about to be taken before the ruler, bade farewell to his Christian fellow prisoners and, having given a sum of money to his gaolers, was granted parole and went to his home to tell his wife to be present at his execution. But when she saw her husband, she thought he was afraid of the tortures and for this reason had rejected Christ and therefore been set free. With this in mind, she shut the door in his face, berating him for his rejection of Christ and calling him a coward who loved his own life. She also reminded him of Christ’s threat to those who abandoned faith in Him. She also called herself miserable and unhappy, because she herself had been denied the fate of a woman martyr and that the happiness and blessedness she had hoped for were replaced by infamy and wretchedness. Once she realized the reason why the saint had presented himself at his home, she opened the door wide and, having taken him into her arms, embraced him with unbounded joy and delight. Then just as she was, she followed him on his way towards the governor.

Adrian was therefore brought before the king, to whom he boldly declared that Christ is the only true God. The tyrant immediately ordered that the saint be subjected to torture. First of all they cast him face down onto the floor and beat him mercilessly with sticks. Then they turned him onto his back and beat him so severely in the stomach area that his insides showed. At the time, the saint was twenty-eight years old. Thereafter, the executioners dismembered him and the other martyrs. Of course, the first to suffer was Adrian. In fact, his wife, Natalia, was the one who stretched each of his limbs on the anvil, beseeching, on the one hand, the executioner to strike powerfully with the hammer against the sharp edge and, on the other, encouraging and strengthening her husband, Adrian to bear the pain with fortitude and not to betray his struggle for Christ through cowardice. 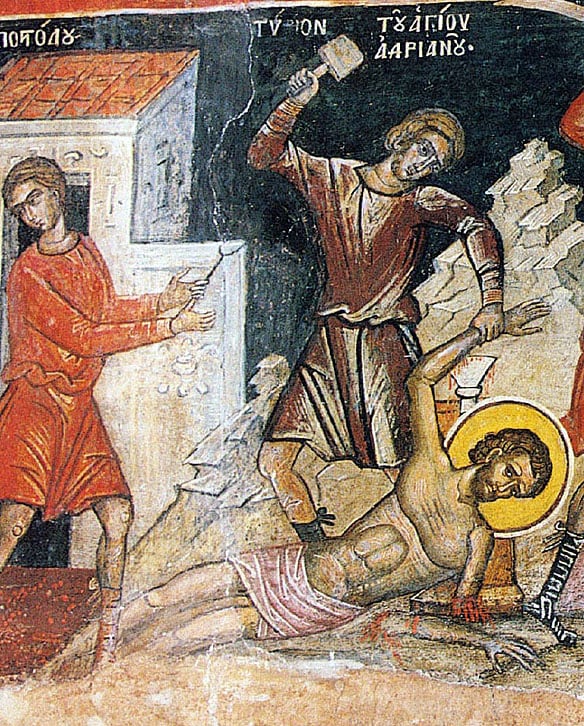 The martyrdom of Saint Adrian, fresco from Monastery of Dionysiou, Holy Mountain Athos, 1547

When Saint Adrian had been executed, together with all the other martyrs, their bodies were to be thrown onto a pyre and burned, but Natalia took a hand of her husband’s and followed after the holy relics. She spread the blood from the relics over herself.

No sooner had the executioners arrived at the appointed place than they cast the holy relics onto the pyre. But at once, torrential rain began to fall, which put out the fire and the relics remained untouched. A Christian called Eusebius collected the relics and, having placed them on a ship, brought them to Argyroupolis, near to Byzantium, where he buried them. Saint Natalia went there herself later, and, after she had given up her spirit to God, was buried next to the relics of the martyrs.

The above account, which is based on a manuscript in the Great Lavra, on the Holy Mountain, and was adapted by Saint Nikodimos, presents a number of problems.

In the first place, the co-emperor usually known as Maximian was Marcus Aurelius Valerius Maximianus Herculius, the augustus in the West, so the ruler who was involved in persecuting Christians here was more probably the Caesar of the East, Galerius (Gaius Galerius Valerius Maximianus), who ruled at the same time, although the emperor himself, Diocletian, who instigated the great persecution of 303-311, had established Nicomedia as one of his administrative capitals.

Secondly, Adrian appears to have been an official of some rank (Herculian Guard?) and may actually have been presiding over the trial of the Christians involved. It is therefore unlikely, though not impossible, from a psychological point of view, that he would suddenly become a Christian and undergo martyrdom, before baptism, and without a word to his wife about his conversion.

Natalia, on the other hand, appears to welcome the turn of events and castigates her husband for cowardice after he has chosen certain death without consulting her.

There is no need to doubt the basic facts of the story, because, apart from anything else, it is not interesting enough for someone to have made it up. But reading between the lines, it may well have been that Natalia was already a Christian or a sympathizer and that Adrian, impressed by his wife’s faith, was on the way to becoming one. Something happened at the trial which persuaded him to take the final step. Natalia was at first overjoyed, then disappointed that he had so quickly apostatized. When she realized his firm intent, she accompanied him to his martyrdom to be present (as he had requested) and to be a source of strength, perhaps in something of the same way that the Mother of God and the women disciples were present at the crucifixion. There must surely have been more to the story than appears in this elliptical account, because rescuing her husband’s hand would hardly qualify Saint Natalia for the honour she now enjoys.

As regards the gruesome “details”, which Saint Nikodimos can hardly have been sure of, we need to see them in a historical perspective. He lived in the latter half of the 18th century and was a contemporary of Saint Kosmas Aitolos, having, at one time been taught by Kosmas’ brother, Archimandrite Chrysanthos. It was a time of even greater persecution than usual for the populations subjected to the Turks, and spiritual leaders were engaged in a desperate struggle to awaken and enkindle the Christian consciousness of the people. Saint Kosmas attempted to do so through education (and eventual martyrdom); Saint Nikodimos, among many other things, through relating inspiring examples of martyrdoms in the past. 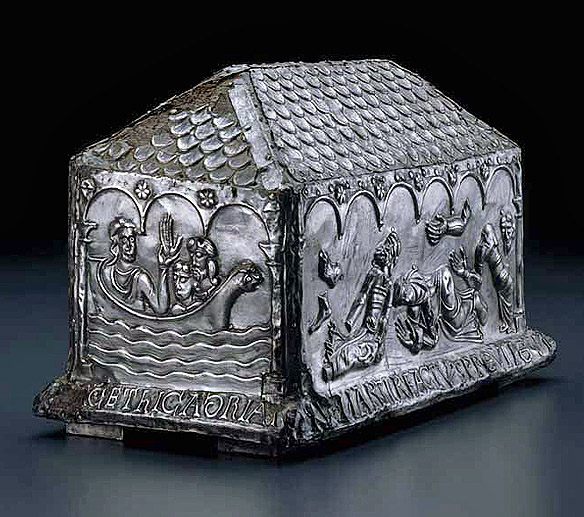 Reliquary containing the hand of Martyr Adrian, now at The Art Institute of Chicago

None of this, of course, detracts in any way from the anguish of a young couple with “everything to live for”, who, suddenly faced with a terrifying choice, gave up all prospect of earthly happiness for the promise of the good things to come. May their holy prayers be with us.

Troparion (Greek tone four) :
Through their sufferings, Lord, your holy martyrs, Adrian and Natalia
have received crowns which are incorruptible from You, our God.
For with Your strength upon them, they laid low their opponents,
And shattered in pieces the pretentiousness of the demons.
Through their intercession, Lord,  save our souls. Amen.